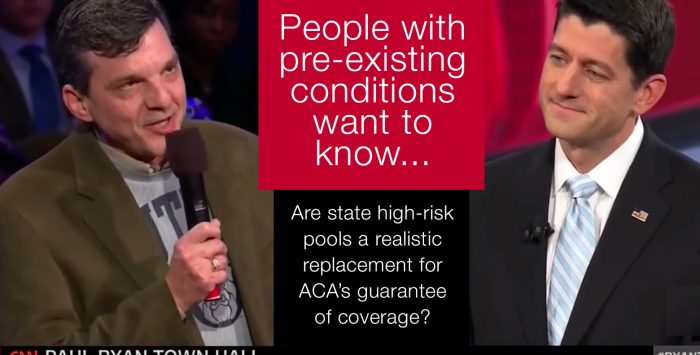 As congressional Republicans – spurred on by president-elect Donald Trump – move steadily toward their goal of repealing the Affordable Care Act, supporters of the law have turned up the volume on their demand for an explanation of how GOP would replace key provisions of the law.

The provision that’s consistently drawn the most attention is the law’s guarantee of coverage for Americans with pre-existing conditions. And last night, the issue of how Republicans would compensate for the repeal of that provision was front and center during a nationally televised CNN town hall.

During the forum, House Speaker Paul Ryan was questioned by Jeff Jeans, a former Republican who changed his opinion about the Affordable Care Act – and his political affiliation – after the law provided coverage for his cancer treatment. “Thanks to the Affordable Care Act, I’m standing here alive,” Jeans said – and then proceeded to ask Ryan why Republicans would repeal the law without a replacement.

Ryan’s response: that Republicans do want to replace the law – and with something better. That “something better,” Ryan noted, includes state high-risk pools, “a smarter way of guaranteeing coverage for people with pre-existing conditions.”

The Speaker’s focus on state-run high-risk pools as a national health coverage solution should come as no surprise to anyone who’s been listening to Ryan and his repeal-focused Republican colleagues.

It’s been a recurring theme in the Republican healthcare reform proposals – including Ryan’s own A Better Way, the 37-page health care reform proposal that House Republicans published in June 2016. And it’s also incorporated in the Empowering Patients First Act of 2015 (H.R 2300), and in the American Health Care Reform Act of 2015 (H.R.2653), which are other possible templates for Obamacare replacement legislation.

High-risk pools were the fallback system in most states in the 90s and 00s, but they obviously weren’t a great solution – and that’s part of the reason healthcare reform was so badly needed in the pre-ACA days.

Prior to the ACA, high-risk pools basically served as a last resort for people with pre-existing conditions who weren’t eligible for health insurance from an employer or the government. Eligibility for high-risk pool coverage varied from state to state, but there was typically a list of medical conditions that resulted in automatic eligibility (because they would result in an automatic decline in the private individual market).

Premiums were often double the standard average rate in a state’s individual market. Although there was typically some plan choice available, the options tended to be limited, and out-of-pocket costs tended to be relatively high. Most states had caps on lifetime benefits in their high-risk pools, which was particularly problematic for people with serious conditions. (To be fair, this was also the case with most plans in the private market too, before the ACA’s reforms).

Federal funding did trickle in for high-risk pools over the years, but it wasn’t enough. High-risk pools were woefully underfunded, and thus unable to serve the full population that needed them. Florida’s pool closed to new enrollees in 1990, and over the following decade, their enrollment dropped by 90 percent. And as of 2005, California’s high-risk pool had a waiting list approximately a year long.

So that’s where we were in the years leading up to 2009, when the ACA debate got underway. Despite the fact that high-risk pools weren’t a great solution prior to the ACA, they are a cornerstone of most of the Republican proposals to replace Obamacare.

Didn’t the ACA implement its own high-risk pools?

When the ACA was enacted in 2010, guaranteed issue coverage in the individual market was still nearly four years in the future. To bridge that gap, the ACA provided $5 billion in federal funding for the Pre-Existing Condition Insurance Plan (PCIP), which established high-risk pools in every state, many running concurrently with the state-run high-risk pools that already existed prior to the ACA.

In January 2011, a National Institutes of Health journal published an article by Harold Pollack explaining that the PCIP program was underfunded and unlikely to successfully address the needs of sick, uninsured Americans.

Pollack’s assessment turned out to be quite prescient. By the beginning of 2013, the PCIP program was running low on funds, and enrollment was halted, nearly a year before guaranteed-issue coverage took effect in the individual market. At that point, there were about 100,000 enrollees in the program, which was well below the 375,000 the government had expected. And yet, despite the low enrollment, the program had run low enough on funding that they had to stop taking new applications in order to continue covering the 100,000 people who were already enrolled.

Funding is an obvious roadblock

Pollack notes that there were roughly 4 million people who were medically uninsurable in the years leading up to ACA implementation. Obviously, the PCIP program didn’t even come close to covering that many people, but if it had, Pollack estimated that it would have required $24 billion in annual public funding.

He noted that “to provide adequate health care for uninsured individuals with chronic diseases, the federal PCIP appropriations would need to be many times higher than either Democrats or Republicans have proposed.”

That point is particularly important. If high-risk pools are going to be relied upon to provide coverage for the sickest Americans, there’s no getting around the fact that the government will have to pony up a significant amount of money in order to keep them viable.

What are lawmakers proposing now?

The proposal that House Republicans published in June 2016 (A Better Way) calls for $25 billion in federal funding for high-risk pools over ten years.

For perspective on the funding, the ACA’s CO-OPs were supposed to get $10 billion in federal funding, but that was eventually cut to just $2.4 billion, and it ended up as loans instead of grants. And lawmakers also changed the rules at the end of 2014 to retroactively make the ACA’s risk corridors program budget-neutral, which meant that health insurers only received about $362 million out of the $2.87 billion they were supposed to receive for the 2014 risk corridors program (2015 funding also fell far short).

As a result of the risk corridor shortfalls, numerous health insurers – mostly smaller carriers, like the CO-OPs – ended up closing at the end of 2015.

And yet the Better Way proposal calls for $25 billion to revitalize programs that struggled for years and only covered a tiny fraction of the population. There are other Republican proposals that call for even less funding for high-risk pools.

The concept of high-risk pools seems to be rather popular among the various GOP replacement proposals – and that’s primarily because the proposals do not have the sort of ironclad ban on medical underwriting that is a cornerstone of the ACA. A Better Way, for example, would include guaranteed-issue coverage with standard rates for people who maintain continuous coverage. But for those who don’t, carriers would be allowed to charge higher premiums.

There aren’t any details yet in terms of whether there would be any caps on how high those premiums could be, and there also aren’t any details in terms of how high-risk pool eligibility would work. But we can connect the dots and assume that there would be people who would end up in the high-risk pools because coverage in the private market was unaffordable or unavailable due to their pre-existing medical conditions.

Putting the sickest in one pool

With sufficient funding, it’s possible for high-risk pools to be a viable solution. But instead of spreading risk out across the largest possible population, high-risk pools do the exact opposite, clumping the sickest people together, without healthy enrollees to balance out the overall risk profile of the pool.

Inherently, the problem comes back to overall cost, regardless of how it’s divvied up. We can use a simplified example to show how it works: Let’s say you have 100 people, all of whom are going to be covered: 95 of them are pretty healthy, and use a combined $100,000 in medical care throughout the year. But the other five have serious medical issues, and use $1,000,000 worth of care over the course of the year.

In order to keep premiums even remotely affordable and still cover the folks in the high-risk pool, there obviously have to be substantial infusions of cash from the government, and from assessments on private insurers and/or medical providers in the state. But the total cost of care for that group of 100 people is still $1,100,000 for the year.

We haven’t saved any money by splitting them up into two risk pools. What we have done, however, is make it much more likely that the sick individuals will face higher premiums, less robust coverage (in an effort to keep costs in check for the high-risk pool), and higher out-of-pocket spending. By separating people into healthy and sick risk pools, we create obstacles to care for the people who are most in need of care.

Will high-risk pools be resurrected?

It’s too early to know for sure, but it’s fairly likely that high-risk pools will play a role in the healthcare reform legislation that the GOP is expected to propose. Although the ban on coverage denials for pre-existing conditions has widespread support, a future version of that provision might not be as robust as the ACA’s total ban on medical underwriting.

If we end up with an individual market where applicants’ medical history can be taken into consideration during the enrollment process, it’s likely that we may also end up with high-risk pools. How much funding they’ll get from the federal government, and exactly how they’ll be structured, is yet to be seen.

Committees in both chambers will now work on legislation to repeal the ACA, with the expectation that their draft legislation will be complete by late January. A vote on ACA repeal could come sometime in the next several week. It’s generally expected to pass, given the Republican majority in both chambers. But the outcome could still be changed if only three Senators can be persuaded to vote no. Andrew Sprung has written a comprehensive explanation of how the American people can make that happen.

If the ACA is repealed, legislation to replace it will be much more complicated than the legislation to repeal it, and will likely take longer to draft. But Republicans have put forth numerous replacement proposals over the last several years, and high-risk pools have been a recurring theme. Rep. Ryan’s focus on high-risk pools during the CNN town hall indicated that he will push for them to be an integral part of the replacement package that Republicans ultimately put forth.

Ryan’s comments about high-risk pools were spoken directly to Jeans, whose cancer would make him uninsurable in the private market without the ACA’s consumer protections. In response to Ryan’s suggestions, Charles Gaba, of ACA Signups, unleashed a Tweetstorm. Gaba addressed not only the callousness of telling a cancer patient that he’s essentially the problem with our healthcare system, but also detailed the myriad ways that high-risk pools were failing Americans prior to 2014, and the sort of funding that would be necessary to make them work in a post-ACA world. It’s well worth reading.

In short, it does appear that high-risk pools could be resurrected, and yes, they could potentially work. But they would require massive cash infusions from the federal government — far in excess of the amounts that have been proposed in various GOP healthcare reform plans. Without adequate funding, they will not be an adequate solution.