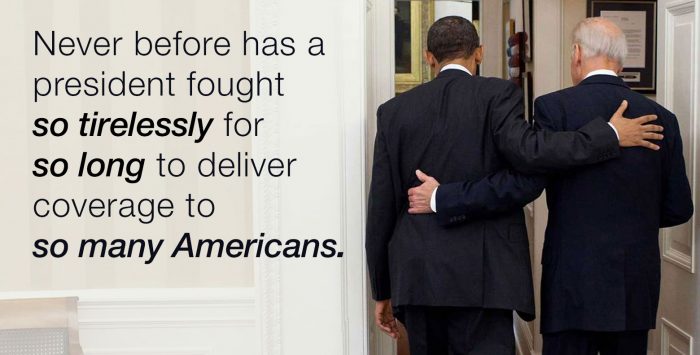 On this, the inauguration day of our 45th U.S. president, we will not mince words.

We will not conceal our sadness as we bid fond farewell to President Barack Obama, who made the expansion of access to comprehensive and affordable coverage a centerpiece of his domestic policy. Never before has a president fought so tirelessly for so long to deliver coverage to so many Americans.

With the hundreds of other health coverage advocacy groups – and the millions of Americans who have benefited from the Affordable Care Act – we offer our eternal gratitude and respect to President Barack Obama.

As we turn the page to a new chapter of American history, we are concerned and anxious that our new president, Donald Trump, will undo the gains of his predecessor. We frankly don’t know what to expect from this new president, whose messages about health reform have ranged from full condemnation of the ACA as a “disaster” to praise for – and some promises to preserve – some of the law’s signature provisions.

Despite this concern we are cautiously optimistic – optimistic because Americans’ eyes have been opened during the past eight years. Millions more have seen the good that the law could do – and now, more than ever, we know that more Americans understand what they were missing in the good old days before Obamacare and how a Republican-controlled Congress – with President Trump’s signature – can move us quickly backward.

And we’re optimistic because the American public – including the public who have stood to gain the most from the law – now favor improvement of the law over repeal of the law. The law has never been more popular.

Obamacare’s architects have long predicted that once our citizenry could finally get its hands on affordable, comprehensive health coverage, the people would never let go. We hope and pray that they are correct – but we also know that hoping and praying isn’t enough.

Today is a new day. Today, we meet a new president. But today, our resolve and our determination to expand access and preserve qualify coverage must be as strong and steadfast as ever.