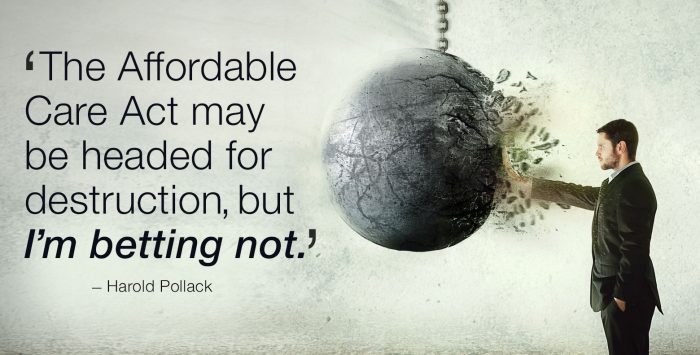 “Obamacare is toast,” read one tweet, reflecting the hive-mind-consensus election night. Two months later, the Affordable Care Act may be headed for destruction, but I’m betting not.

This is an odd political moment. The range of plausible outcomes ranges from 20 million people losing health insurance coverage all the way to ACA surviving surprisingly intact. The only solid prediction I will give is that there will be a $346 billion tax-cut for Americans with incomes exceeding $200,000 per year. Hopefully these ACA-related tax cuts will merely be used to balloon the deficit, not to become a justification for “pay-for” cuts in coverage or essential services.

Seldom has one party combined comprehensive control over the levers of government with such limited public mandate for what it has pledged to do. Republicans momentarily have the votes required to wreck the ACA. They also control 32 statehouses. Their activist party base and many Republican officials demand that they do precisely that. Washington Republicans may bow to this pressure. Many, though are mindful of the disparity between their immediate power and the long-term political risks.

Republicans run an obvious risk of political overreach, particularly if they enact damaging measures on a party-line vote-and do so by repealing the entire law the very filibuster-proof reconciliation process they condemned Democrats for using in ACA’s final legislative clean-up.

As if to underscore the risks, the nonpartisan Congressional Budget Office this week issued a report that the blunt repeal HR 3762, proposed by HHS Secretary nominee Tom Price, would – if unaccompanied by some accompanying “replace” option – increase the number of uninsured Americans by 32 million, and would double individual health insurance premiums over what we experience in the ACA. Anything like this would be politically catastrophic. Republican Senators such as Susan Collins are already starting to drift away from a strident repeal message.

There’s another wild card, too. Mr. Trump is the least popular President-elect on record. He lost the popular vote by 2.5 million. And he is distinctly less popular now than he was on Election Day. His net favorability stands at roughly -14. That’s 57 points below Barack Obama’s standing eight years ago. Only 35 percent of Americans believe Trump has the temperament for the Presidency. Fifty-nine percent think he is not even “somewhat qualified.”

The tide of public opinion has turned

Many Congressional Republicans had hoped to quickly repeal ACA on a party-line vote, and then work out some sort of replacement over time. But a national consensus has emerged to oppose this “repeal and delay” option. ACA is embedded too deeply in the fabric of American life to blithely cast it aside.

ACA is becoming markedly more popular, reflecting growing awareness among both Trump and Clinton voters of the harm ACA repeal would bring to patients, families, and communities. A FOX News poll, of all things, indicates that only 17 percent of Americans believe ACA should be repealed without a clear replacement enacted at the same time. Health insurance industry veterans, even leading ACA critics, warn that “repeal and delay” would deeply damage insurance markets. A slew of Republican governors have openly rejected “repeal and delay,” rightly fearing that they would be left with unexpected burdens, and that their party would be blamed for the accompanying dislocation of insurance markets. America’s Catholic bishops-not exactly Democratic operatives-even sent a letter to Congress stating:

Repeal of key provisions of the Affordable Care Act ought not be undertaken without the concurrent passage of a replacement plan that ensures access to adequate health care for the millions of people who now rely upon it for their wellbeing.

Aside from the unpopular individual mandate, almost every major component of ACA commands broad support. A Kaiser Family Foundation post-election survey finds that more than 80 percent of Americans support allowing young adults to stay on their parents’ insurance eliminating out-of-pocket costs for clinical preventive services, maintaining the basic structures of ACA’s marketplaces and Medicaid expansion. Sixty-nine percent of Americans support the ban on insurers denying coverage based on preexisting conditions, and support increased Medicare taxes on the most affluent Americans imposed by the ACA. State marketplaces have generally stabilized with the 2016 rate increases. Core Republican electorate would certainly be gratified by ACA’s precipitous repeal. Indeed they demand it. The rest of America is pretty horrified by that prospect.

Constituents are responding to the threat of repeal

Now that the ACA is under genuine threat, record numbers of people have signed up. Worried constituents are flooding the House and Senate phone lines to defend health reform. Embarrassing footage of angry constituents has led congressional Republicans to shelve town hall public forums out of fear of bad publicity. Men and women with life-threatening illnesses have made heart-rending videos about the importance of ACA that have gone viral.

Given all this, I’m feeling optimistic. Democrats and Republicans who want core elements of ACA to be retained or repaired are the clear majority. Effective organizing, confidence and civility in opposition are making a difference. The worst can still happen, of course. Republicans still control every legislative lever to wreck ACA, and have shown skill and determination in prior legislative battles. The overall politics are not working in their favor.