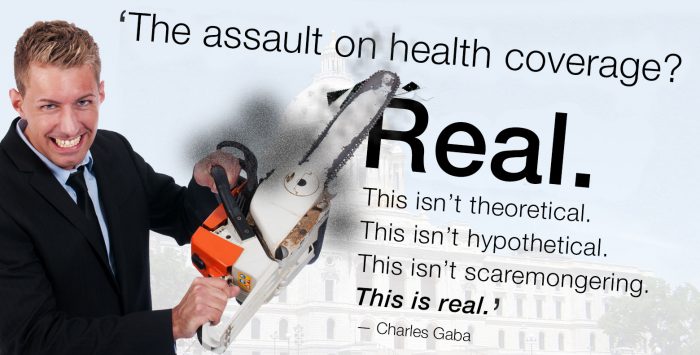 For years now, supporters of the Affordable Care Act have pointed out that in addition to reducing the uninsured population by over 20 million people, the ACA also includes important protections for all Americans, including those covered by employer plans.

The most obvious and widely discussed of these are the “guaranteed issue” and “community rating” provisions, which state that insurance carriers aren’t allowed to discriminate against people with pre-existing conditions, nor are they allowed to charge them more for having one. (The sole exception to this is people who smoke, and even that only applies in some states.)

One of the other major protections, however, is the requirement that in order to be legally considered as being an ACA-compliant health insurance policy, a product/service sold by a health insurance carrier must include coverage of 10 essential health benefits. In addition to these, there’s also a long list of preventative health services which have to be covered at no out-of-pocket fee to the enrollee … but I’m not even going to get into that today.

An improvement over ‘junk policies’? You decide.

To give you an idea of how important this is, prior to the ACA, carriers were able to get away with selling so-called “mini-meds”… more commonly referred to as “junk policies,” and with good reason, as described in this 2011 explainer from the Kaiser Family Foundation:

Wow, $2,000 in benefits per year? Awesome! That’s enough to cover … um … one day in the hospital per year, and absolutely nothing else whatsoever!

The Republicans in Congress have, of course, voted to repeal the ACA dozens of times … and with Donald Trump being sworn in as President last week, they finally have their chance to actually make this happen. The process has already started with preliminary bills passing in both the U.S. House and Senate, and Trump’s executive order on Thursday. While there’s still a long way to go, there’s a strong possibility that the ACA will indeed be repealed within the next few months.

In response, Democrats and other supporters of the law have been stepping up their defense of the many good things about it, including the requirement that health insurance policies actually cover basic healthcare services.

The GOP game plan is to try and pitch “access” to healthcare coverage “to some degree or another.” “Access” is a meaningless buzzword; I have “access” to a Porsche dealership, in that I can wander around the lot and kick the tires, but that hardly means I can buy the car.

Meanwhile “to some degree or another” should be a massive red flag to anyone who hears it. It’s easy to “lower premiums and deductibles” on a policy … simply strip away coverage of anything resembling actual healthcare services.

ACA opponents have countered by attempting to pooh-pooh the idea that insurance companies would stop selling actual insurance policies … that Democrats are Chicken Littling here, getting all worked up over nothing.

“Blue”-state vision of things to come?

Well, they might want to tell that to the Republican-controlled Minnesota State House of Representatives, which, on January 19th, passed “healthcare” bill HF-1, Amendment A … in a nearly straight-party 72-54 vote. The amendment – noted below in a Facebook post by Minnesota House candidate Lindsey Port –  is attached to a bill that would deliver premium assistance to 120,000 Minnesotans facing dramatic spikes in their rates for 2017 plans.

And though the premium assistance legislation hasn’t made it to Gov. Mark Dayton’s desk for signature yet – the Legislature and Dayton’s people were supposed to trying to “close the gap” over the weekend – the amendment gives us a pretty good sense of how Republicans would like “fix” the health insurance market in Minnesota. The “fix”: removal of more than 30 healthcare benefits – medical services, treatments for various conditions – even diagnostic procedures.

This is attached to a screen shot of the list in question:

In case you didn’t notice, that’s … pretty much everything, really.

Protected by Obamacare … for now

Sec. 11. [62Q.022] FEDERAL ACT; COMPLIANCE NOT REQUIRED.
Notwithstanding any state or federal law to the contrary, a health plan company may  offer health plans that do not include federally required health benefit mandates.

Yes, that’s right: Assuming this Minnesota bill – including the amendment above – were to be signed into law, the only thing preventing carriers from denying any or all of these types of coverage would be the Affordable Care Act.

This isn’t theoretical. This isn’t hypothetical. This isn’t scaremongering. This is real. The Minnesota State House actually passed this amendment. Will it pass the state Senate? Perhaps not. Will Democratic Gov. Mark Dayton sign it if it does? Certainly not … but he won’t be governor forever.

Louise Norris, who monitors state health reform legislation closely for healthinsurance.org, confirmed that and my interpretation – and Port’s – of the bill is mostly accurate, with one caveat:

It looks like they settled on a second amendment that allows insurers to offer plans w/o EHBs as long as they offer at least one plan that does have all the mandated benefits … carriers would have to offer at least one plan with all the mandated benefits, and the rest could be a free for all. Of course, that means people with health conditions would end up on the high-quality plans … [assuming the waiver allows carriers to use separate risk pools for ACA-compliant plans vs. those which don’t], the result would be skyrocketing premiums for the more robust plans.

Could this approach ‘go viral’?

The larger point is that if a bill like this can be voted on and pass in a purple/blueish state like Minnesota, I guarantee you that similar bills are on the table in red states … and those will likely be passed and signed in the blink of an eye, in anticipation of the ACA itself being torn asunder soon thereafter.

At that point it’s open season. Forget about “mini-meds“… this opens up the possibility of “micro-meds”: so-called “health insurance policies” which literally don’t cover a damned thing.

At the federal level, the Congressional Budget Office saw the writing on the wall over a month ago and has already stated, in no uncertain terms, that they, at least, are NOT going to be part of this scam on the American public:

… In response to a future policy that had minimal federal or state regulations, CBO and JCT expect that some new insurance products would be offered that limited coverage to the amount of the tax credit. Some of those insurance products purchased by people using a tax credit would probably not offer much financial protection against high out-of-pocket costs. Depending on the size of the tax credit, however, the depth and extent of coverage and the premiums of plans could vary. As discussed in another blog post about how CBO defines and estimates coverage, CBO does not count plans that have very limited benefits in measuring the extent of private insurance coverage; in such an assessment, it counts only people with a comprehensive major medical policy as having private insurance.

Good for the CBO!! They’re not going to allow the GOP to try and claim that millions of people are “covered” with “health insurance” when what they actually have is just a coupon for $25 off their next checkup or whatever.

Unfortunately, the CBO has no power to stop Congress from passing a law which drops these basic coverage provisions; it just means that they can’t use CBO “insured” numbers as a selling point for doing so.

Coming soon to a legislature near you?

Oh, and getting back to the Minnesota bill, one more thing:

Yes, because perish the thought we don’t start screwing over thousands of people as quickly as possible.