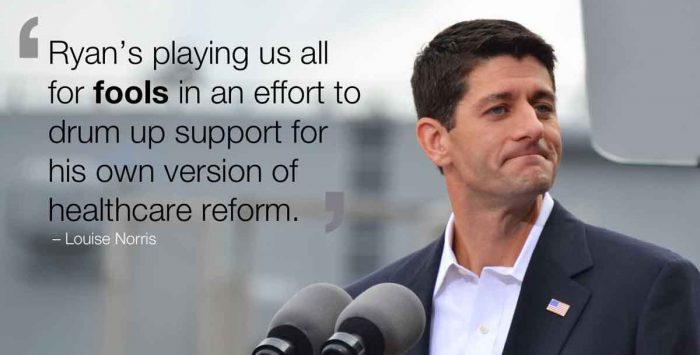 Speaker of the House Paul Ryan is trying to convince the American people that his proposal for healthcare reform – or some variation of it – is better than the Affordable Care Act. But instead of honestly laying out the ways that GOP healthcare reform proposals differ from the ACA, he’s relying on the fact that a broad swath of the American public knows very little about the nitty gritty details of the ACA or the Republican alternatives.

Some people aren’t even aware that the ACA and Obamacare are the same thing, and Ryan’s using that to his advantage.

The ACA subsidy is already a refundable tax credit

On January 18, Speaker Ryan was interviewed by Charlie Rose, and one of the topics was the GOP’s plan to repeal and replace the ACA. Paul Ryan, who was in the House when the ACA was debated and passed, who has fought against it ever since, and who has devoted a significant amount of time to crafting a replacement, said this:

With that statement, Ryan is counting on the fact that most Americans don’t know exactly how the ACA subsidy works. (Indeed, most Americans don’t have anything to do with the ACA subsidy, since only about 3 percent of the U.S. population was receiving ACA subsidies as of last year). And he knows that people will nod in agreement with his statement, because it sounds good … if you don’t know anything about the ACA.

But the ACA subsidy IS a refundable tax credit. (Here are the details from the IRS.) It’s already available regardless of your income tax liability. (The availability of the ACA tax credit does depend, however, on your income; wealthy people aren’t eligible for the ACA’s tax credit, but they would be eligible for the tax credits that have been proposed in most of the Republican alternatives.)

There is really no conceivable way that Ryan doesn’t know this. But he knows that a lot of Americans don’t understand how it all works and he’s using that to his advantage.

Selling health insurance across state lines has long been one of the main talking points in Republican healthcare reform proposals. Here’s what Ryan said during the interview:

Ryan’s referring to Geico and Progressive, and he’s insinuating that they sell auto insurance across state lines. But they don’t. Each state has its own Insurance Commissioner and Insurance Department that regulates all types of insurance within the state, and each state is free to use its own legislative process to create laws pertaining to insurance coverage in the state.

Yes, Geico and Progressive sell policies nationwide. But there are similar big-name carriers in the health insurance industry. Cigna, Aetna, Humana, and Anthem are all examples of carriers that sell policies in numerous states. And yet, just like auto and homeowners coverage, health insurance plans have to conform to the requirements laid out by the laws and regulations of the state where the plan is sold.

Let’s cut to the chase here. To sell insurance across state lines the way Republicans have proposed would require ripping away sovereignty from the states. There is no way to sugar coat that. Getting rid of those pesky “lines around the states” is code-speak for telling state lawmakers and insurance commissioners that they’re no longer allowed to make or enforce insurance laws and regulations within their respective states.

Taking away states’ rights isn’t something that Republicans are likely to broadcast as part of their plan, but their proposal to allow coverage to be sold across state lines could only be implemented if they eliminated each state’s right to regulate its own market. And a lot of bad things will happen if we go down that path without the ACA’s consumer protections in place.

There are also some logistics to keep in mind. In order to sell insurance in a given area, an insurance carrier has to establish a provider network in that area. Building and maintaining networks isn’t cheap, and it’s not something that’s just going to magically happen, even if we did eliminate state-based laws and regulations pertaining to health insurance.

On the same day that Ryan sat down with Rose, Trump appeared on Fox & Friends, and talked about his ideas for replacing the ACA. Trump said that the GOP plan to replace the ACA would “get private insurance companies to take care of a lot of the people that can afford it.”

And yet, the ACA-compliant health insurance plans that people have been enrolling in for the last three years are private plans. When you shop for coverage – both on and off-exchange – you see plan options from the various Blue Cross Blue Shield carriers around the country, Humana, Medica, Cigna, Molina, etc. Some are small, locally based carriers, while others are big-name carriers that operate in several states. But there’s no “Obamacare” plan option when you’re shopping for insurance; it’s all private carriers.

Trump genuinely might not know that Obamacare plans are sold by private insurers. That fits with the generally low level of understanding that he’s demonstrated on a variety of topics heading into his tenure as president.

But there is really no conceivable way that Paul Ryan doesn’t know that the ACA subsidy is a refundable tax credit. Or that Geico and Progressive are regulated by states just the way health insurers are.

Ryan’s playing us all for fools in an effort to drum up support for his own version of healthcare reform. That’s shameful, regardless of which side you support. If being truthful about the actual merits of your plan isn’t enough to convince people of its value, maybe you need to rethink your plan.

Kellyanne Conway’s new job title is Counselor to the President, and she’s a significant public face for the Trump Administration. On January 22, Conway appeared on NBC News’s “This Week” and talked about the president’s plans for the ACA. Conway reiterated a point GOP leaders have been making ever since the election, saying “we want to make very clear to everyone that those who are relying upon coverage will not lose it.”

Furthering the confusion, Conway also said that the Obamacare penalty has “been a burden on many small business owners, many of whom complained to us that that Obamacare penalty, along with so many other draconian regulations, are just a stranglehold.” Since Conway refers to business owners here, we have to assume she’s talking about the employer mandate and its associated penalties. And yet, the ACA doesn’t require small businesses to offer coverage to their employees. If you have fewer than 50 employees, there’s no penalty for not offering them coverage. Not only is there no penalty, there’s actually a tax credit that helps to offset part of the premium for very small businesses (fewer than 25 employees) that pay modest salaries.

But people who hear Conway’s statement might not know that, and they might assume that the ACA does require small businesses to offer coverage. This is another example — in a very long list — of GOP leadership counting on Americans’ lack of understanding about the ACA, and creating further confusion by misrepresenting what the ACA does and what the GOP replacement plan will do.