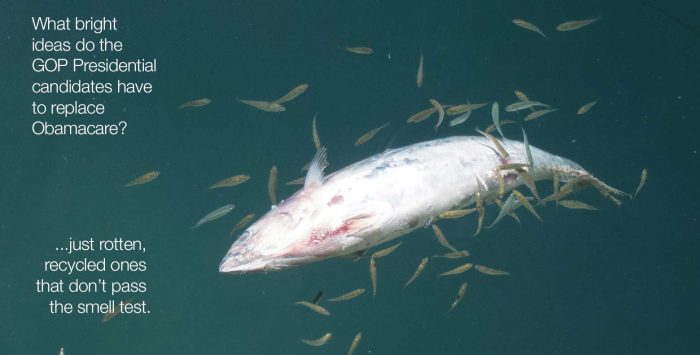 "Pecking at the dead" by Thomas Quine

After dozens of attempts over the past five years, Republicans were finally able to get a bill through Congress last week to repeal the Affordable Care Act. It was all theatrics, of course. As everyone expected, President Obama vetoed the bill as soon as it reached his desk on Friday.

Despite what they might tell their constituents, Republican lawmakers know that as long as Obama calls the White House home, which he will for another full year, Obamacare will not be repealed or scaled back in any meaningful way. But what will happen if on January 20, 2017, the day the next president is inaugurated, Congress once again passes the bill Obama vetoed?

It’s safe to say that if a Democrat is elected this fall, the bill would be vetoed again. But what if Americans decide that the GOP should be fully in charge of Washington? Every single one of the Republican candidates has condemned the law and pledged to get rid of it. So let’s assume that one of the dozen Republicans still in the hunt will replace Obama in the Oval Office. What would he or she replace Obamacare with?

Well, despite all the talk about repealing and replacing the law, none of the Republicans running Congress or running for president have taken the time to flesh out an alternative that would work better for most Americans. But based on what the candidates have said on the campaign trail so far, here are five things most of them have said at one time or another that they support. I call them the Faulty Five because they’re all flawed to the point of being little more than meaningless sound bites.

“Get rid of the artificial lines and you will have yourself great plans,” said Donald Trump during the first Republican debate.

Why faulty: Insurers can already do this, for crying out loud. Trump and the other candidates are either being disingenuous or showing their ignorance.

True facts: Federal law doesn’t prohibit insurers from selling coverage in more than one state. In fact, the Affordable Care Act actually calls for multi-state plans to be made available across the country, and it encourages states to set up “healthcare choice compacts” to facilitate the sale of policies across state lines.

Not only that, but a number of states have passed laws encouraging insurers in other states to come in and set up shop. So far though, there have been no takers. Here’s why: It would cost insurers millions if not billions of dollars to establish provider networks and everything else involved in selling coverage in a new state, and the insurers would have to comply with the new state’s regulations. And then they’d have to compete with well-established companies with much better name recognition.

Why, for example, would Blue Cross of Tennessee want to spend a fortune to do business in Georgia only to face formidable competition from Blue Cross of Georgia? It wouldn’t (and hasn’t, even though Georgia has thrown out the welcome mat) because Blue Cross of Georgia has such market domination in the Peach State that it can demand favorable rates from doctors and hospitals, something newcomer Blue Cross of Tennessee, with zero market share in Georgia, couldn’t do. Consequently, the Tennessee Blue wouldn’t be able to offer comparable rates without losing its shirt in Georgia. Insurers are in business to make money, not to lose their shirts to make politicians’ dreams come true.

“We need to try the free market. The free market. Where people actually have to compete,” says Carly Fiorina. She and most of the other candidates want to get rid of the ACA’s consumer protections and let insurers once again sell whatever they want, regardless of value, and turn down customers they don’t like.

True facts. Insurance is regulated for many good reasons, among them the need to keep greedy people from selling junk insurance just to make a few bucks and to make sure insurers have the financial resources to pay medical claims. Unlike Hewlett Packard, insurers don’t sell printers that we can do without. We have to have access to medical care, and, in my humble opinion, we should have a way of covering the cost of that care without losing our shirts.

The ACA’s consumer protections are vitally important. They protect us from snake oil insurance, and they make it unlawful for insurers to refuse to sell us coverage because of a preexisting condition or to charge us far more than we could possibly pay because we’re older and not as healthy as we used to be.

Why should health insurance so special that it should be exempt from regulations? Why should we get rid of consumer protections in the health insurance industry and not, for example, in the automobile business? Would we be OK with getting rid of the Federal Motor Vehicle Safety Standards, which, among other things, make sure car companies install rearview mirrors and brakes that work? Not likely.

3. Pushing us toward Health Savings Accounts

This is what every conservative think tanker and politician advocates as about all we’ll need once we get rid of all those pesky health insurance regulations. “In order to right the ship,” says Ben Carson, “we need to return the responsibility for good health care to the patient and the health care provider. One of the best ways to do this is through health savings accounts, which patients can control.”

Why it’s faulty: The federal government already encourages people to enroll in HSAs, and it’s been doing so for more than a dozen years. When Congress passed the Medicare Modernization Act of 2003, it included a provision, at the request of the banking and insurance industries, to allow Americans and their employers to contribute several thousand dollars a year on a pre-tax basis to an HSA tied to a high-deductible plan.

True facts: HSAs are great tax shelters for the well to do, but most Americans simply don’t have the extra cash to put into such an account. According to a 2015 research report by the Employee Benefit Research Institute, only about 17 million people are enrolled in HSAs despite the tax advantages, and the average HSA balance at the end of 2014 was just $1,933. That won’t go very far if you wind up in the hospital with a serious illness or injury. You’ll be on the hook for far more than $1,933 even after a short hospital stay.

This explains why a lot of folks with HSAs file for bankruptcy every year: the total they owe in medical bills is thousands more than they have in their savings accounts. According to a recent Bankrate survey, 63 percent of Americans haven’t even set aside a thousand dollars to cover emergencies of any kind. Where the heck do politicians think average folks are going to get the cash to fund an HSA?

If you want to see the cost of medical care come down, say Republican candidates, pass tort reform. “I have long supported making all medical expenses tax deductible, allowing insurance to be bought across state lines, tort reform (state-level), and empowering all citizens to save for health expenses by removing the high-deductible insurance policy requirement to access to Health Savings Accounts,” says Senator Rand Paul of Kentucky. And former Texas governor Rick Perry, now also a former candidate for president, wrote in a 2009 commentary that Texas “”stands as a good example of how smart, responsible policy can help us take major steps toward fixing a damaged medical system, starting with legal reforms.”

Why it’s faulty: Most states have done the same thing Texas has done – enact tort reform/medical malpractice laws – but those laws have not brought down either the cost of health insurance or the cost of medical care.

True facts: While reducing the cost of medical malpractice insurance certainly has merit – some tort reform advocates contend that large jury awards against a few doctors has resulted in all doctors practicing “defensive medicine” by doing unnecessary procedures and ordering nonessential tests – the approach most states, including Texas, have taken has not resulted in savings to patients and health plan members. In 2003, Texas lawmakers passed a bill that capped non-economic (pain and suffering) damages at $250,000 in lawsuits against doctors and $750,000 against hospitals. While the cost of malpractice coverage went down temporarily, it soon climbed back up.

And there is no evidence that Texas doctors are practicing any less defensively than doctors in other states or that they have passed whatever malpractice insurance savings they might on to their patients and insurers. Seven years after the tort reform law was passed, the average premium for family coverage in Texas was $14,526. That’s $655 higher than the U.S. average. Reforming malpractice laws has merit, but the way Texas and many other states have approached it leaves a lot to be desired.

Republicans profess to hate the so-called individual mandate in the Affordable Care Act, even though it’s an idea that originated at the conservative Heritage Foundation as an alternative to Bill and Hillary Clinton’s 1993 health care reform plan. “Innovations, not mandates, will bring down health care costs,” said former Florida governor Jeb Bush when he announced in October that he would get rid of the individual mandate along with the rest of Obamacare.

Why it’s faulty: History has shown that insurance companies can’t offer reasonably priced coverage to people with preexisting conditions unless everyone is required to have insurance.

True facts: When Kentucky, New York and Washington passed laws in the 1990s that required insurers to sell coverage to people who had been sick in the past but didn’t pass laws mandating that residents buy coverage, most of the health insurers abandoned the states. Those that stayed had no choice but to charge everybody exorbitant premiums. Kentucky and Washington soon reversed course and repealed their laws but New York didn’t.

Here’s what happened, according to America’s Health Insurance Plans: the individual market in New York shrank from 1.2 million in 1992 to 31,000 in 2010. “At that point, the only people who participated in the market were those who were very sick and affluent,” AHIP wrote in a brief. Bottom line: unless there is some mechanism to get everyone into coverage, the people who need access to care the most are often the very people who can’t afford it or even be able to buy it at any price.

Here’s what I hope will happen at the next presidential debate, which will be held Thursday in North Charleston, S.C. I’m hoping the moderators, Fox Business News’ Neil Cavuto and Maria Bartiromo, will ask the candidates exactly what their Obamacare replacement plans are and exactly how those plans will work.

I’m hoping, but not holding my breath. I’ll be shocked if any candidate does more than recite one or more of the Faulty Five. They’re guaranteed applause lines but no more meaningful than the bill Obama vetoed last Friday.