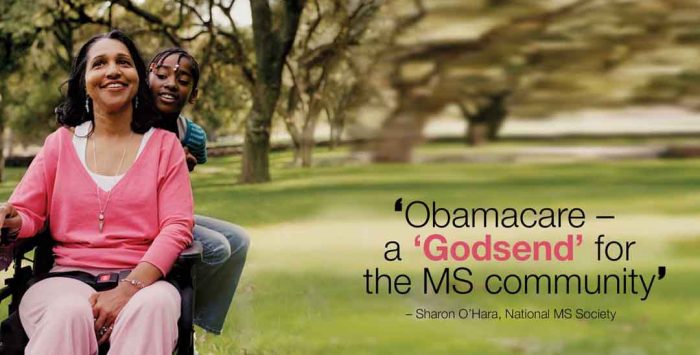 In the United States, there are an estimated 400,000 people with the autoimmune disease Multiple Sclerosis (MS). The disease itself is challenging – with unpredictable and life-threatening symptoms – but it’s been particularly challenging financially, with notoriously expensive treatments.

To make matters worse, MS patients in the individual health insurance market have historically had few health coverage options when it came to paying for those treatments.

Prior to implementation of the Affordable Care Act in 2014, nobody with Multiple Sclerosis had access to new individual market health insurance plans unless they lived in one of the five states (Maine, Massachusetts, New Jersey, New York, and Vermont) where individual health insurance was guaranteed issue. In most other states there was a high-risk pool option, but coverage was expensive, limited, and in some cases, not available at all.

And in 38 states and DC, small-group plans could be priced based on the health status of the group’s employees, making health insurance more expensive when a small group had a member with a chronic condition like MS.

Obamacare: the game changer for MS

That’s all changed under the ACA. Since the beginning of 2014, individual health insurance in every state has been guaranteed issue, regardless of medical conditions. And in the small-group market, carriers can no longer use a group’s medical history to determine premiums.

The ACA also provides premium subsidies to make coverage affordable for people for whom it was previously out of reach, and requires large companies to provide affordable health insurance for their full-time workers.

As a result of all these changes, Gallup data indicates that the uninsured rate has dropped from a high of 18 percent in 2013 to 11.9 percent in 2015. There are far more people with health insurance now than there were before Obamacare was implemented, and particularly for people with chronic conditions like MS, it’s now possible to switch from one plan to another during open enrollment, and to have access to the full range of plans available in the individual market.

MS is a particularly challenging condition from a financial perspective, both because patients tend to struggle to be able to work full-time, and because the cost of treatment is ongoing and shockingly high.

A 2008 Canadian analysis found that nearly 80 percent of people with MS are unable to work full-time due to their disease. For people who are significantly disabled due to MS, obtaining Social Security Disability Insurance – and eventually Medicare, after a 24-month waiting period – is typically straight-forward. But for patients whose disability is intermittent, as is often the case with MS, it can be difficult to get on the waiting list for Medicare, and equally challenging to hold down a job that provides health insurance.

Thanks to the ACA’s Medicaid expansion however, income insecurity is no longer a barrier to obtaining health insurance in the 30 states and DC where Medicaid has been expanded. In those states, adults with household income up to 138 percent of the poverty level (a little less than $27,000 for a family of three) are now eligible for Medicaid.

Sharon O’Hara, Executive Vice President of the Colorado-Wyoming chapter of the National MS Society, described the ACA as a “Godsend” for the MS community, and Medicaid expansion as a “great windfall.”

O’Hara noted that in Colorado, where Medicaid has been expanded under the ACA, Medicaid is accepted by all but two neurologists who treat MS, and that the list of covered drugs for MS is similar for Medicaid and private health insurers. Although opponents of Medicaid expansion often claim that Medicaid coverage is no better than being uninsured (and some even say it’s worse), that certainly is not the case for the MS community.

Coverage for prescription drugs is of particular importance for people with MS, and the ACA has been a game changer there as well. Under the ACA, all new major medical health insurance plans in the individual and small group markets include coverage for prescription drugs, and they all cap in-network out-of-pocket costs for essential health benefits – including the patient’s share of covered drug costs – at no more than $6,850 for a single individual in 2016.

This is significantly better than pre-ACA days when health plans could be sold without prescription drug coverage at all, or with coverage only for generic medications. But even with the ACA’s improvements, out-of-pocket costs are still a struggle for some MS patients.

There are no MS drugs with a list price of less than $50,000 a year in the United States. And health insurance carriers are increasingly requiring patients to pay a percentage of their drug costs (coinsurance), rather than a set copay. This is particularly true for high-priced drugs that get categorized in a plan’s specialty drug tier, and MS is one of the conditions where every covered drug is likely to be in the specialty tier. (Health plans can choose which MS drugs they will cover, but there are no inexpensive options).

When the cost of the drug is thousands of dollars per month, specialty-tier pricing that requires the patient to pay a percentage of the cost can result in the patient meeting the health plan’s maximum out-of-pocket in the first few months of the year. Although many patients with chronic illnesses do meet their health plans’ out-of-pocket limits over the course of the year, having to do so in just the first month or two can be financially challenging for patients.

To address this issue, several states have limited the amount that patients can be charged in out-of-pocket costs for medications covered by their health plans’ specialty-drug tiers:

Several other states have introduced legislation that would limit the amount patients must pay for covered specialty drugs, but have not yet implemented changes.

For patients who are facing unaffordable coinsurance for specialty drugs, many pharmaceutical companies have patient assistance programs that provide free and low-cost drugs for patients who would otherwise not be able to afford them.

This is a good solution in the short-term, and the majority of MS patients are eligible for some sort of assistance. But O’Hara noted that relying on patchwork patient assistance programs is not a sustainable long-term solution for patients with chronic illnesses that can only be treated with high-cost, specialty drugs.

The ACA has absolutely been a game-changer for people with MS and other chronic illnesses. But there is still work to be done.

Just as the ACA finally implemented a gradual fix to Medicare’s Part D donut hole starting in 2011 – five years after Part D became effective – future legislative and regulatory action may improve the affordability of treatment for people living with MS. But for now, the situation is certainly much brighter than it was before the ACA.