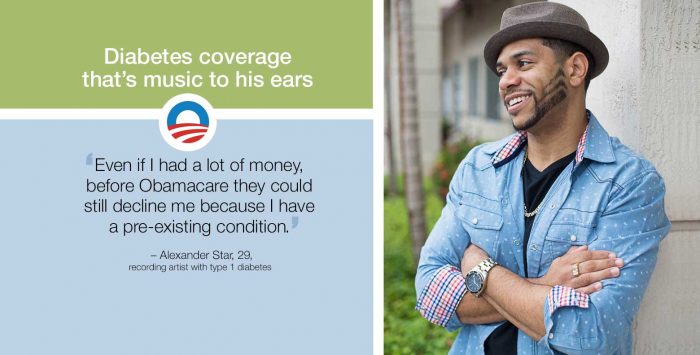 When Alexander Star was 15 years old, he thought he was the picture of health, especially after he made the varsity basketball team. But when he told one of his teachers he needed to go to the bathroom every 10 minutes, she rightly told him he should be checked for diabetes. Frequent urination is a classic warning sign.

“The doctors wondered why I wasn’t in a coma,” says Star, who is now a 29-year-old recording artist/songwriter living in Florida. “That was the beginning of my journey as a type 1 diabetic.”

He started taking better care of his health, which includes eating right, as well as taking insulin and checking his blood glucose levels multiple times a day, a regimen that can get expensive. He was covered under his father’s insurance plan until he turned 26 – when he suddenly found himself without health insurance he could afford.

“The COBRA plan I was on shot up from $120 a month to $512 a month for the exact same plan, a cost that was not do-able for me,” Star says. Fortunately, the Obamacare marketplace opened up soon after and he enrolled in a new plan.

“If it wasn’t for Obamacare, I don’t know how I’d be capable of taking care of myself,” Star says. “Even if I had a lot of money, before Obamacare they could still decline me because I have a pre-existing condition.”

Star signed up for a plan with better coverage and more personal attention than he received from his previous plan. His premiums are around $150 a month and he doesn’t pay anything extra for his insulin pump or continuous blood glucose monitor – diabetes management options his previous provider never even told him about.

An insulin pump is a device that delivers insulin automatically if blood glucose levels climb, and the monitor continuously checks blood glucose levels. Type 1 diabetes can be challenging to control because the body isn’t making enough – or any – insulin on its own, so tools like these can make a big difference. (In people with type 2 diabetes, the body still produces insulin but isn’t using it effectively.)

Star’s insurance plan also includes a diabetes management program that gives him access to a team of doctors, nurses and other healthcare experts who help him stay healthy. This is another benefit of the Affordable Care Act (ACA), which requires every insurance plan to offer management of chronic diseases like diabetes.

Under his plan, Star’s health advisor calls him every month to see if he needs anything between visits with his specialist – a team approach he appreciates.

“My team is a lot stronger now,” says Star. “You can know everything about diabetes, but no man is an island. I now have a team I can reach out to any time that is strong in places where I am not.”

He’s paying it forward, too. As he pursues his music career, Star is determined to set an example for others living with type 1 diabetes. In fact, he included a scene highlighting his diabetes management in a music video.

“I’m a recording artist on tour and I happen to have type 1 diabetes,” Star says. “If I can lead by example and encourage someone else to live comfortably, then I’ve done my job.”

Star’s experience is shared by millions of Americans with diabetes who now have access to better care thanks to the ACA.

There’s good evidence that chronic disease management works – and that the ACA is already making a difference in that regard. According to a study published in 2015 and led by researchers at Harvard T.H. Chan School of Public Health, people with health insurance are more likely to have their high cholesterol, diabetes and high blood pressure correctly diagnosed, and to have these chronic conditions under control, than similar uninsured people. Looking at these results and 10-year ACA enrollment projections, “These effects constitute a major positive outcome from the ACA,” according to study senior author Joshua Salomon.

The majority of people with diabetes have type 2 diabetes, which can often be prevented or delayed. Obamacare is helping those people, too.

According to Hector De La Torre, executive director of the Transamerica Center for Health Studies, more than 29 million Americans have diabetes – but one in four who have the condition don’t know it.

“Having access to care will help to diagnose those folks so they can start taking better care of themselves,” he says.

What’s more, 86 million American adults – more than one in three – have pre-diabetes, De La Torre says. Pre-diabetes is a condition in which blood glucose levels are higher than normal, but not high enough to be considered type 2 diabetes yet. Studies have shown that moderate weight loss and increases in physical activity can prevent or delay the development of type 2 diabetes in people with pre-diabetes.

“It’s a ticking time bomb of a chronic condition,” De La Torre says. “Between 15 and 30 percent of people with pre-diabetes will develop type 2 diabetes within five years unless they’re diagnosed and start taking care of it under the guidance of a physician.”

A diagnosis is key to preventing type 2 diabetes, which means regular check-ups – which the ACA requires insurers to cover once a year at no extra cost. And for those who already have type 1 or type 2 diabetes, the appropriate care can prevent serious long-term complications including kidney disease, heart disease, blindness or amputation.

Access to care is important. But so is care coordination and continuity of care, which means establishing a relationship with a healthcare team and seeing them regularly, like Star does. This is vitally important for people with chronic conditions – something healthcare experts have been advocating for years.

What’s more, a provision of the ACA created a National Diabetes Prevention Program (NDPP), which brings evidence-based lifestyle change programs to local communities. Led by the Centers for Disease Control and Prevention (CDC), NDPP initiatives are available across the country and online to help prevent or delay the development of type 2 diabetes.

By every measure, people with diabetes – and those at risk – have significantly improved access to quality care than they did before the ACA.

“I have a better healthcare team and more consistent care,” Star says. “There is no question that as a type 1 diabetic, my life has been positively impacted by the ACA.”

Remember: Open enrollment for 2016 ends January 31, 2016, so if you haven’t signed up for coverage yet there’s no time to waste.