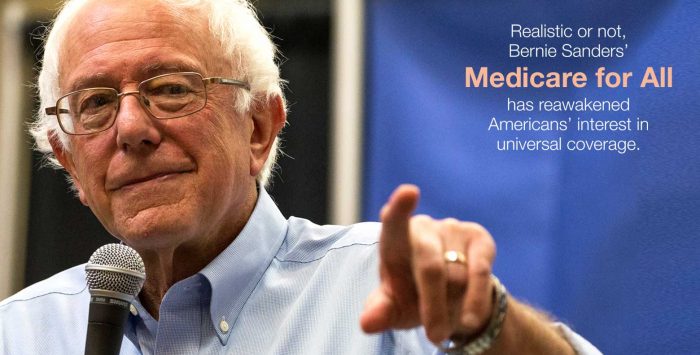 Senator Bernie Sanders has given the idea of single-payer health care new life as he makes it a major issue in his campaign for the Presidency. And we should all thank Sanders, if for no other reason than the fact that he is shedding new light on this ambitious proposal.

Why are Sanders’ ideas resonating now? Sanders’ plan builds on the idea of expanding Medicare to everyone and marginalizing the role of private insurance. It has been part of the reform debate for many years. Medicare for All was debated when the Clintons tried to pass universal coverage in the 1990s, and it was part of the debate again in 2009 over Obama’s Affordable Care Act. In neither case did it gain enough support among Democrats to pass.

In 2013, even after the ACA had passed and was already being implemented, Sanders tried again by introducing a bill, S. 1782, the American Health Security Act, in which he proposed folding the financing of most of the public programs like Medicare and Medicaid into a single federally managed and operated system. It did not pass either.

So what makes Sanders and his supporters believe now is the time and that this new plan is doable, either economically or politically? Is it just wishful thinking or fantasy politics? The right opposes it and respected policy experts on the left like Ezra Klein and VOX, Harold Pollack, and Paul Krugman, have all posted columns explaining why they think Single Payer is not likely to happen any time soon. Ezra Klein notes that Sander’s proposal would cost a lot in very visible ways (new taxes versus existing premiums); Paul Krugman points out that it would require defeating some of the most powerful lobbies in politics; and Harold Pollack points out the likelihood of a Supreme Court shooting it down even if it were to pass.

Although many fervent Single Payer supporters may understand and support what Sanders is proposing, some of his newest followers may not realize what his proposal would mean in practical terms. To start with, what does the term “single payer” really mean? In 2013 I wrote a blog about some positive efforts to implement Single Payer at the state level (most of which were never implemented):

While there are a variety of efforts around the country to promote single payer health care, the definition of single payer remains opaque and confusing to the public. To some, it simply means getting rid of private forprofit insurance companies; to others it means public financing of health care; and still others, free care. But the term “single payer” usually refers to the method of collecting revenue, usually by the government through taxation, to pay for and administer health care services for a specific population. Our own program for the elderly, Medicare, uses a single payer financing approach. But while Medicare uses tax money to pay for health care for people over 65, it contracts with private insurance companies and private providers to actually deliver the care.

The fact that Medicare continues to rely on private health insurance plans is something that many supporters of single payer find objectionable. After all, much of the dissatisfaction with the Affordable Care Act has been the increased reliance on private health insurance companies to offer coverage through the exchanges. Sanders’ plan promises a supplemental role for private insurance but a much less prominent one than exists in Medicare today.

The simplicity of Sanders’ latest plan is what makes it so attractive to people fed up with the complexity of our current system.

Under Sanders’ Medicare for All, everyone gets an insurance card – even undocumented immigrants. There are no copays or deductibles. Just take your card to the doctor or hospital of your choice and it will be accepted. All care would be included, e.g. hospital, primary care, mental health, vision, hearing, long-term care, prescription drugs.

The federal government would roll the financing of all existing public programs (Medicare, Medicaid, Children’s Health Insurance Program, etc.), into a single integrated system administered at the national level. States could participate but if they refused, the national program would take over.

It should be noted that there is only one mention of how Medicare for All would integrate with the Affordable Care Act in the Sanders plan. Sanders has said he does not want to get rid of the ACA, but if his program is nationally administered, it is not clear what role the state exchanges would have or what would happen to the essential benefits outlined in the ACA. It seems that the choice of plan would be replaced with free choice of doctor or hospital, something some Democrats might support even if it meant dismantling the central feature of the ACA.

However, as disruptive as the destruction of private insurance would be, Sanders also proposes eliminating all employer-sponsored health insurance plans as well. While some employers might welcome getting rid of the burden of providing health insurance, most still oppose the idea.

At least two big questions remain: What would single payer cost and is there political support for doing it?

Sanders lays out some numbers in his proposal but many economists are extremely skeptical. The plan requires the American public to trade the costs they currently have (e.g. monthly premiums, copays, deductibles, and for Medicare itself, payroll taxes) for a simpler up-front tax which he claims would be cheaper in the long run for most Americans. The plan also relies heavily on being able to save costs in the medical care system to make up for what taxes cannot raise, but that likely means paying providers less – not a popular option.

As for the politics of all of this, the opposition among those who would have to vote for single payer is overwhelming. The ACA barely passed in 2009, even with a Democratic majority in the House and Senate. Now the Republicans have the majority and almost no one believes that will change in this election. We might win a few more seats in the Senate, but our majority would still be a slim one. In what universe could a President Bernie Sanders or Hillary Clinton pass a massive federal takeover of the financing of health care (and this time it really would be a takeover) in this political environment?

Can we move toward Single Payer?

If implementing Medicare for All seems nearly impossible politically, is all hope lost for a more publicly accountable and affordable health care system? Maybe not. Are there any suggestions for how we might move ahead? So far Sanders has not suggested any incremental approaches and while Hillary defends the ACA, she has not yet been specific about how she would improve it.

I believe bringing back the idea of a Public Option as a plan choice within the Exchanges could be one way to demonstrate the feasibility of a publicly administered approach. Strengthening the CO-OPs in the ACA (which are in bad shape) could also provide choices that are not all based on private for-profit insurance. So far neither of these ideas has gained much traction.

Senator Sanders has done everyone a service by bringing the Single Payer discussion back into the national debate. If support for Single Payer is more than symbolic politics, it’s time to get serious and practical about what we can actually accomplish.