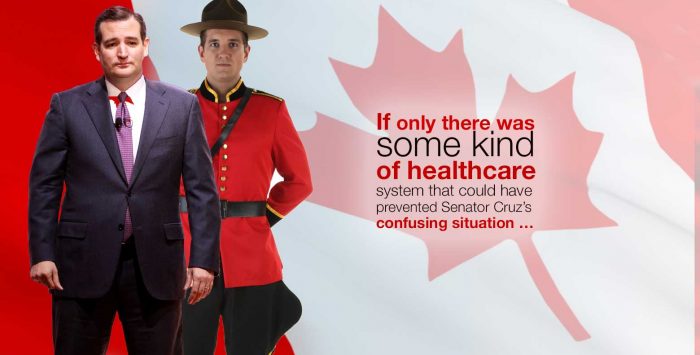 Earlier on Friday, it was widely reported that GOP Senator Ted Cruz, the guy who hates Obamacare so much he shut the entire federal government down just to prevent it from being implemented, had told his campaign supporters that he and his family:

Here’s what Cruz actually said on the campaign trail:

“I’ll tell you, you know who one of those millions of Americans is who’s lost their health care because of Obamacare? That would be me,” Cruz told a Manchester, New Hampshire, audience. “I don’t have health care right now.”

“So our health care got canceled, we got a notice in the mail, Blue Cross Blue Shield was leaving the market. And so we’re in the process of finding another policy,” Cruz said. “I hope by the end of the month we’ll have a policy for our family. But our premiums — we just got a quote, our premiums are going up 50 percent. That’s happening all over the country. That’s happening in New Hampshire.”

I, along with several other writers/reporters, quickly noted that:

The Affordable Care Act does not compel members of Congress to enroll in DC’s health care exchange; it simply cuts off the government contribution to their insurance plans if they buy their policies elsewhere. “The final rule extends a Government contribution towards health benefits plans for Members of Congress and designated congressional staff so long as the health benefits plans are purchased via the appropriate SHOP as determined by the Director,” a summary of the final rule says. “Nothing in the final rule or the law prevents a Member of Congress or designated congressional staff from declining a Government contribution for him or herself by choosing a different option for their health insurance coverage.”

I should note at this point that over at Balloon Juice, Richard Mayhew noted that:

BCBS of Texas offered to map its policy holders to different coverage. There is a federal regulation describing how this mapping can occur. I am trying to figure out why the Cruz family was not passively mapped to a new policy during the autorenewal process.

Oops. Ted does have coverage after all.

Ted Cruz has health insurance, and he had it all along, his campaign said Friday night, reversing what the presidential candidate said a day earlier.

Cruz spokeswoman Catherine Frazier said Friday that Mr. Cruz’s insurance broker had told him that he lost his health coverage when his Blue Cross and Blue Shield of Texas preferred provider organization, or PPO, policy terminated on Dec. 31.

But Mr. Cruz had in fact been automatically enrolled by Blue Cross and Blue Shield of Texas in another, narrower-network “health maintenance organization” plan that kept him covered in January. As we reported earlier, when we explained the headache on Friday, that’s what the insurer said it did for all customers in his situation — even if Mr. Cruz didn’t know it.

Based on the information from his insurance broker, “Sen. Cruz believed the family was uninsured and asked the broker to pull quotes immediately for a new policy,” Ms. Frazier said. “The Cruz family is currently covered by a Blue Cross HMO.”

Not for long, though. Mr. Cruz recently arranged to get a new policy that is closer to the kind of coverage he had before, and will be a Humana enrollee effective March 1 in one of their wider-network PPO plans. That’s what will cost him around 50% more than he was paying in 2015, Ms. Frazier said.

And now … some new questions

Well, now. This certainly answers a few questions … while raising a few others:

Here’s the list of DC SHOP exchange offerings. If the Cruz family must have a PPO instead of an HMO (which isn’t unreasonable … some people really do prefer them), they have 14 of them to choose from, which include nationwide coverage including Texas at the Silver, Gold or Platinum levels.

Unfortunately, I have no way of knowing what the actual premium cost would be for any of these. (The DC SHOP exchange requires you to create a verified user account in order to window shop.) But whatever it is, I’m willing to bet that it would cost Sen. Cruz the same or less than his old PPO, given that he’d receive a hefty government employee subsidy … except that he refuses to do so due to his “principled stance” against “government handouts” (not that this has prevented him from literally living off of taxpayer funds for the past 12 years, of course, but I digress).

Now, I will say one thing in Cruz’s defense here: It is unfortunate that BCBSTX chose to discontinue PPOs completely, and the whole “plan mapping” thing under the ACA is a bit of a surprise to many people. On the other hand, it’s a hell of a lot better than being kicked to the curb completely (as Cruz allegedly thought had been). In addition, assuming his family had found themselves sans coverage prior to the ACA, they might have found themselves SOL if anyone had been diagnosed with a pre-existing condition.

Good for you, Senator

One final note: Once Sen. Cruz has started his new policy, thanks to the ACA’s laws against the ugly practice of “rescission,” neither BCBSTX nor Humana can legally drop them from their coverage mid-year simply because he, say, forgot to fill out a form properly.

Anyway, I’m glad to hear that Sen. Cruz has continuous, comprehensive healthcare coverage after all. It’s a shame that it required so much fuss, bother and confusion, though … sure would be nice if the U.S. had guaranteed, universal healthcare coverage someday like, oh, say, Canada …