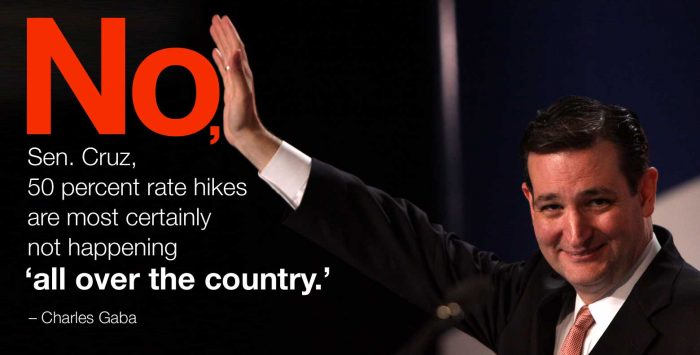 EDITOR’S NOTE: On January 22, hours after this article was posted, the Cruz campaign revealed that the Senator actually does have health coverage. Read Charles Gaba’s update.

Healthcare coverage is a very important subject to Republican Senator Ted Cruz (he’s running for President, don’cha know?). It’s such an incredibly vital issue to him that he led the charge to shut down the entire United States federal government for two weeks over it back in 2013, costing American taxpayers $24 billion for no particular reason. So you’d think that it would be equally important to him to make sure that his own family was covered by some sort of comprehensive healthcare policy.

You would be wrong.

As Michael Hiltzik noted this morning, after the Cruz family received a notice last fall that their Blue Cross Blue Shield of Texas PPO policy was being discontinued (something which the company actually announced way back on July 23rd of last year, and something which every insurance carrier has been known to do from time to time since long before the Affordable Care Act was passed), Cruz could have done several things:

However, Sen. Cruz didn’t do any of these things. Instead, he did … absolutely nothing.

Of course, Cruz (along with everyone else) still has another 10 days to sign up, although at this point his new policy wouldn’t start until March 1st … but that’s entirely his own fault. Not Obamacare, not HealthCare.gov, not even BCBSTX, really. (Cancelling his old plan may be a bummer, but he had ample advance notice about it).

Nope, Ted Cruz’s own laziness got him in this “predicament.” Then again, as Richard Mayhew notes, it probably wasn’t an accident; the Cruz family is wealthy and can afford to pay their healthcare costs for two months, so this was very likely a deliberate campaign stunt on his part.

You might also think that, seeing how incredibly important healthcare is to Ted Cruz, he’d have his thoughts and proposals plastered all over his campaign website. Once again, you’d be wrong. There’s no mention of healthcare on his issues page whatsoever. The closest thing I could find is this press release from last June about how awful he thinks Obamacare is.

About that 50% rate increase

Hiltzik and Mayhew cover most of the bases of this farce, but I do want to touch on just one more thing:

What’s more certain is that Cruz’s characterization of his issue is layered with dishonesty. He claims that the new plans he’s examined carry premium increases of 50% –”That’s happening all over the country,” he said. “That’s happening in New Hampshire.”

Well, no. Cruz wasn’t especially forthcoming with details about his old plan or the new ones he’s examining, but average rate increases in the individual market in Texas aren’t anywhere near 50%. No single carrier is getting a rate increase that high; the largest is 34%, for a very tiny carrier. At some companies, including BlueCross BlueShield, some rates actually decreased.

In New Hampshire, the biggest plans had increases in the single digits. At Anthem, the largest individual insurer, some rates decreased.

I’ll go Hiltzik one better here. Just yesterday, the HHS Dept. released a “halftime report” which broke down the average premium rate changes across all 38 states on the federal exchange for this year, including everyone who signed up between Nov. 1st and December 26th, which compares the 2016 exchange-based policy rates vs. 2015. Guess what?

The average ObamaCare premium rose to $408 per month for 2016 plans, about a 9 percent increase from this time last year, according to a new report from the Department of Health and Human Services.

And yes, that’s at full price; the subsidized average increase to date is only 7.6 percent higher on average. So no, Sen. Cruz, 50-percent rate hikes are most certainly not happening “all over the country.”

Of course, this is an average; some states/carriers saw higher or lower rate hikes. Well, last year, Texas’s average exchange enrollee was paying $337 per month. This year, it’s up to $358 … or just a 6.2 percent increase.

What about Cruz’s carrier?

What about Blue Cross Blue Shield of Texas? OK, now we’re getting a bit closer: They requested an average increase of 20.0 percent, although the final approved average was 18.75 percent, according to RateReview.HealthCare.gov. That’s still pretty stiff, but it’s still not even close to a 50% increase.

Wait a minute … BCBSTX has a lot of different policies available. Yet according to the Rate Review site, even this doesn’t wash:

Scope and Range of the Rate Increase:

Blue Cross and Blue Shield of Texas (BCBSTX) is filing new rates to be effective January 1, 2016, for its Individual ACA metallic coverage. As measured in the Unified Rate Review Template (URRT), the range of rate increases by product is -4% to 19%.

OK, so what about New Hampshire? Well, it’s true that Minuteman Health (one of the ACA-created Co-Ops which Republicans hate so much) did request a whopping 46.5% rate hike this year. However, the approved rates ended up being drastically lower:

Minuteman Health: Approved average rate increases range from 2.75 percent to 9.63 percent for individual market plans (much lower than the proposed rate increases of 42 percent to 51 percent). Catastrophic plan rates will decrease by more than 27 percent in 2016, which is very close to what Minuteman Health requested for this plan. Minuteman had 8,360 in force enrollees as of November 2015.

In short, setting aside the idea that Cruz deliberately avoided getting covered as a campaign stunt, unless there’s some other factor I’m missing here, this means that Ted Cruz:

Not a bad day’s work on the campaign trail, I suppose.