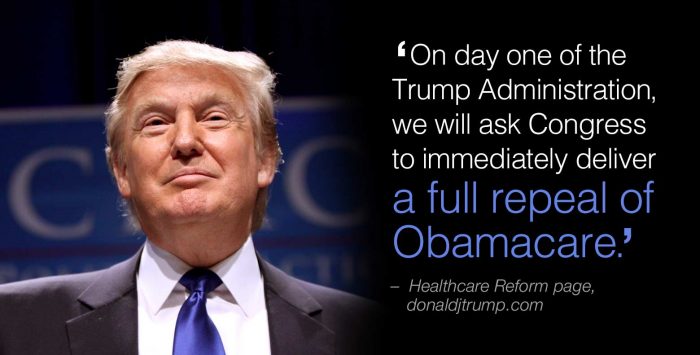 Donald Trump will be our next president. What exactly does that mean for your health insurance coverage and access to healthcare? It’s a question that has drawn speculation from health policy wonks since the day after Trump’s election – but I’ve also been receiving many of these questions from clients who are curious about whether their coverage will change any time soon.

In truth, nobody can say for sure at this point, since there are still so many moving parts to the law. But we have some educated guesses, based on Trump’s positions and the actions Congress has taken over the last six years with regards to Obamacare.

Here are the best answers we have at the moment for some questions you might have, along with more details about what you can expect in the coming months and years:

Do you still need to buy ACA-compliant coverage?

Q: If Obamacare is going to be repealed, do I need to buy ACA-compliant coverage now?

A: Yes, you still need coverage for 2017, and now’s the time to buy it. On November 9, the day after Trump won the election, 100,000 people enrolled in coverage through HealthCare.gov, according to HHS Secretary Sylvia Burwell. That’s the largest number of sign-ups in a single day since open enrollment began on November 1, so there is considerable momentum in terms of people enrolling in coverage for 2017.

We can assume that Congress will pass legislation to repeal parts of the ACA (more details below), and that Trump will sign it into law. This is likely to happen in 2017. But it’s unlikely that it will have an effective date prior to 2019, as Congress will need time to implement its replacement plan, and the IRS will need time to establish the new tax system that will go along with whatever replaces the ACA (most likely, tax credits to offset the purchase of coverage).

So for 2017, you still need coverage. And subsidies — including premium subsidies and cost-sharing subsidies — are still available. Although they’re likely to be eliminated eventually, at least in their current form, that’s not likely to take effect in 2017.

Is your ACA subsidy in danger?

Q: If I buy a plan for 2017 through the exchange, can Trump take away my premium subsidy?

A: The plan designs for 2017 are already locked in, and enrollment is underway. The legislation to repeal subsidies is expected to come in 2017. But it’s unlikely that it would take effect before 2019, because Congress and the IRS need time to implement a replacement plan.

The ACA was signed into law in 2010, but the bulk of its provisions (including subsidies, guaranteed issue coverage, and Medicaid expansion) didn’t take effect until more than 3½ years later, at the start of 2014.

In a similar vein, an ACA repeal bill is likely to be implemented at least a year or two after it’s enacted, in order to minimize disruption. But make no mistake – there will be disruption. Just as the ACA created an upheaval, so too will undoing the ACA.

Will you lose your Medicaid coverage?

Q: Is the Trump Administration going to do away with expanded Medicaid? How soon would I lose coverage?

A: The Trump Administration will probably roll back Medicaid expansion, but that’s not likely to happen until 2018 or 2019. And they will most likely replace it with block-grants or per-capita allotments that states would be able to use as they see fit.

Some states would opt to keep their current guidelines in place, but others would not. It would depend on the availability of state funds to supplement the block grants from the federal government, and on state leaders’ attitudes towards Medicaid.

Medicaid enrollment nationwide has increased by 15.7 million people since the end of 2013, largely as a result of Medicaid expansion under the ACA. There is no doubt that a Republican Administration will have a goal of reducing the total number of people who are enrolled in Medicaid, which is currently about 73 million. Their approach is likely to focus on getting people off Medicaid and into the private market, with tax credits to help cover the premiums.

Trump campaigned heavily on the premise of repealing Obamacare. His campaign website says “On day one of the Trump Administration, we will ask Congress to immediately deliver a full repeal of Obamacare. However, it is not enough to simply repeal this terrible legislation. We will work with Congress to make sure we have a series of reforms ready for implementation that follow free market principles and that will restore economic freedom and certainty to everyone in this country.”

Trump’s healthcare position page goes on to list his plans for replacing Obamacare:

President-elect Trump also has a summary of his healthcare reform views on his transition website, including many of the same points that were in his campaign platform.

But getting all of this done is not going to happen overnight. The ACA has been in effect for nearly seven years, and the majority of its provisions have been in force for at least three years. It’s very much entrenched at this point, and replacing it will take time.

Congressional Republicans have been fighting against Obamacare since it was enacted, pushing various plans to repeal and/or replace the law. Their efforts have been thwarted thus far by the lack of a supermajority in the Senate, and President Obama’s veto pen.

But President-elect Trump is likely to sign any ACA repeal bill that ends up on his desk, and a reconciliation bill — one related only to spending — would be able to pass the Senate with only a simple majority, and wouldn’t be subject to a filibuster.

Congress will almost certainly kick off 2017 with a bill that repeals various portions of the ACA. An example of a possible template bill is HR 3762, a reconciliation bill passed by the House and Senate in late 2015, but vetoed by President Obama in early 2016. It would have repealed Medicaid expansion, premium subsidies, cost-sharing subsidies, the individual and employer mandates, the “3 Rs” and many of the various taxes and funding mechanisms that are included in the ACA.

Since it was a spending bill, HR3762 would not have fully repealed the ACA, and that’s almost certain to be the case with whatever repeal bill is introduced in 2017. HR 3762 made no mention of essential health benefits, pre-existing conditions, or allowing young adults to remain on a parent’s plan until age 26, for example. And it would have increased funding for community health centers and some urgent mental health and substance abuse treatment needs. But it would have eliminated many of the provisions of the ACA.

Ironically, eliminating the individual mandate while keeping the guaranteed issue provision in place is an almost sure-fire way to end up with fewer insurers offering coverage, and much higher premiums. So that’s an issue lawmakers will have to figure out when they implement a replacement for Obamacare, as guaranteed-issue coverage has broad bipartisan support.

And while most aspects of HR 3762 were slated to take effect two years after the bill had been introduced, the legislation would have retroactively terminated the individual mandate. The Congressional Research Service estimated at the time that premiums would have risen at a rate of 20 percent per year starting in 2016, due to the elimination of the individual mandate.

The Wall Street Journal reported on November 11 that after his meeting with President Obama, Trump had clarified that he supports keeping some parts of the ACA in place, including the provision that allows young adults to remain on a parent’s plan until age 26, and the ban on coverage denials based on pre-existing conditions. Those are both parts of the law that couldn’t be dismantled under a reconciliation bill anyway.

Notably, HR 3762 called for a two-year wait before subsidies and Medicaid expansion would be eliminated. The bill was introduced in late 2015, and the plan was for those aspects of the ACA to be cut off at the end of 2017. The two-year time frame was to give Congress time to establish their replacement plan during those two years.

Whatever repeal bill is introduced next will almost certainly have a similar provision. Even if the legislation is introduced in early 2017, Scientific American reports that the bill itself probably wouldn’t arrive on the president’s desk until the summer of 2017.

And Vince Ventimiglia, Vice Chair of Leavitt Partners, noted in a November 10 webinar that it takes at least 18 months for the IRS to sort out a new tax system such as the one Congress has proposed to offset the cost of coverage in a post-ACA system. So we can probably expect that subsidies and Medicaid expansion would remain in effect through the end of 2018, while the new system is put in place.

In late 2015, the CBO estimated that about 22 million fewer people would have had health insurance after the end of 2017 if HR 3762 had been enacted. The GOP’s plan is absolutely to put together some sort of coverage options for them before their coverage is eliminated, as 22 million people losing coverage without a replacement option is politically untenable.

And while Trump’s win may have caught many in Congress off guard, the King v. Burwell lawsuit gave them an opportunity to start laying some of the groundwork for how to go about keeping people insured if premium subsidies are eliminated. That case was decided in June 2015, and ultimately, subsidies were maintained in every state. But in the lead up to the Supreme Court’s decision, lawmakers were working to develop contingency plans, and their new replacement plans under a Trump Administration can build on some of that previous work.

Although Republicans in Congress are mostly united in terms of their efforts to repeal as much of the ACA as possible, they don’t have as much consensus on the details of a replacement plan. President-elect Trump praised single-payer healthcare in 2015, but his campaign platform focused on less regulation and and more of a free market approach. And in general, the GOP tends to gravitate to free market solutions.

But it’s also important to note that the GOP is almost certainly going to be working towards a bipartisan replacement for the ACA. The ACA itself was a very partisan bill, and as a result, there’s been very little bipartisan progress in adjusting or fixing it over the years. Republicans aren’t likely to want to go down a similarly partisan path with their own efforts, as such solutions don’t tend to be as lasting as bipartisan solutions that give each side a reason to want to see the measures succeed.

With that said, the most recent version of House Republicans’ healthcare reform proposal, titled “A Better Way” was published in June, and gives us a glimpse of how a GOP replacement for Obamacare might be structured. It includes several broad themes, some of which will have at least some degree of bipartisan support:

Wendell Potter addressed several of the GOP’s reform ideas here. There is still much debate in terms of whether these ideas could be viable, and how closely the ultimate GOP Obamacare replacement plan will match the vision laid out in A Better Way.

It also remains to be seen just how much bipartisan input there will be for whatever replaces Obamacare. If Congress can work together, across party lines, to come up with a solution, it will have far greater staying power than the ACA did. And if they focus on real reforms that ensure affordable access to health insurance and healthcare for all Americans, we’ll be rooting hard for them to succeed.