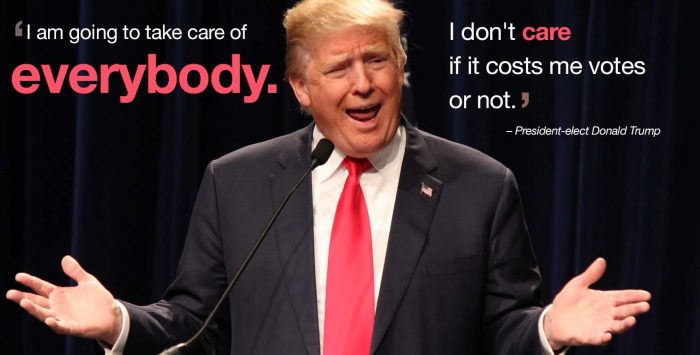 Now here is an interesting forecast from a man who has built a thriving managed Medicaid business:

The Trump administration and Congress “are not going to pull out the rug from people,” said Dr. J. Mario Molina, the chief executive of Molina Healthcare, a for-profit insurer. He predicted that the earliest the law could be repealed was 2018, and that it would be replaced with something like a modified version of Medicaid, the government insurance for poor people. “The debate is not around the what, but around the how,” he said.

While I have exactly zero faith that Republicans would enact or adequately fund such a thing, I do think that a) its simplicity would appeal to Trump …

Hey Trump, want to replace the ACA with something beautiful? Expand Medicaid to 300% FPL.

and b) done right, a program like managed Medicaid for anyone who needs it, with a buy-in for people at higher income levels, would be preferable to the ACA marketplace. The difference would be that government would effectively set the prices that the managed Medicaid companies pay to hospitals and doctors, and set them very low – at least at first. If significant numbers of not-poor people bought in, pressure would probably rise to raise payment rates to bring more providers in.*

‘A modified version of Medicaid’ for the not-poor

“A modified version of Medicaid” for the not-poor already exists. Two states, Minnesota and New York, have exercised an ACA option to establish Basic Health Programs for people who earn too much to qualify for Medicaid but less than twice the Federal Poverty Level (FPL). These programs have lower premiums – in New York’s case, really minimal premiums – than plans offered in the marketplace to this income group. New York’s BHP, the Essential Plan, also has lower out-of-pocket costs than marketplace plans, while Minnesota’s program, MinnesotaCare, has out-of-pocket (OOP) costs equivalent to those paid by the lowest-income marketplace enrollees, those with incomes up to 150% FPL (OOP costs were hiked significantly in 2016, raising enrollees’ estimated share of average yearly costs from 2% to 6%).

Multiple insurers offer plans in both states’ BHPs (as they do in most states’ managed Medicaid programs). In both states, the participating insurers are pretty much the same group that offer plans in the ACA marketplace and in the off-marketplace individual market. The chief difference is in the rates they pay providers – and since those rates are very low, in the breadth of the provider networks they offer to enrollees.

MinnesotaCare long pre-dates the ACA. In fact, pre-ACA, it was offered to single adults with incomes up to 250% FPL and parents up to 275% FPL. It is well-regarded and lacks the stigma that often attaches to Medicaid. In 2015, eligibility was cut off at 201% FPL to conform to ACA requirements for BHPs. A task force and legislators have since floated proposals to raise eligibility to 275% FPL and to offer MinnesotaCare to all comers.

Such plans have been hamstrung by crisis in Minnesota’s individual market, where premiums spiked over 50% this year. Sucking more private market enrollees into the BHP would probably exacerbate the crisis. What would appear to be politically impossible is to replace the whole private market with MinnesotaCare – notwithstanding that almost the same group of insurers offers plans in both markets, and that Minnesota’s insurers are all nonprofit by statute in any case. The main losers if the private market were wiped out would be doctors and hospitals, who would be forced to accept the lower payment rates offered by public programs for several hundred thousand enrollees.

In New York, the Essential Plan has zero premium for enrollees with incomes up to 150% FPL and a $20 monthly premium for enrollees in the 150-200% FPL range. Fourteen insurers offer plans, and 7-10 plans are offered in each of New York City’s boroughs. Provider payment rates are set at Medicaid + 20% – and Medicaid rates in New York are very low, averaging just 57% of Medicare for all services.

In 2009, prior to ACA passage, the Community Service Society a New York nonprofit that later helped plan the state’s BHP, floated a state plan for something very like the BHP that would be offered on a buy-in basis to anyone who needed insurance – including businesses that wanted to offer it to their employers (more on that plan here).. Such a plan would probably be Mario Molina’s dream, as Molina’s core business is managed Medicaid, and the company has profitably offered Medicaid-like plans in the ACA marketplace.

If Trump were serious about offering “something terrific” in place of the ACA, it might look very like a “BHP for all who need it” – that is, a program offering plans to anyone lacking access to employer-sponsored insurance or another public insurance program.

Of course, there are some wee barriers to go this route:

Still, quick, simple, beautiful … if one could imagine a “good Trump” (I can’t) this might be his thing.

* On the other hand, Paul Ryan currently proposes to cap the federal share of Medicaid funding on a per-capita basis, that is, allow federal per-person funding to rise a small, fixed amount per year. Under that system, if healthcare costs rise faster than expected, states would have to make up the difference or reduce spending per enrollee.