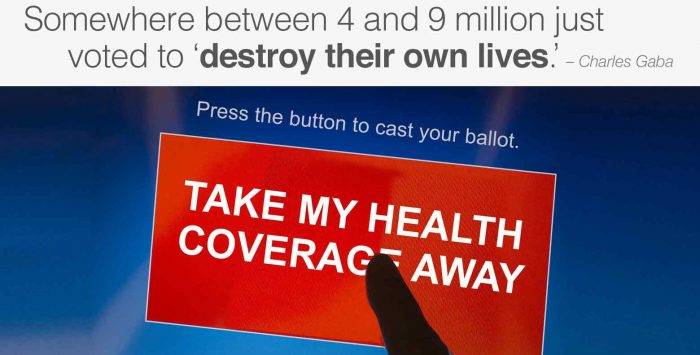 Over at the New York Times, Paul Krugman did some quick back-of-the-envelope-math to attempt to answer the question “How many people just shot themselves in the face?”

He’s talking, of course, about the fact that with Donald Trump’s Presidential win and the Republican Party now controlling the White House, House of Representatives, U.S. Senate and (presumably, as soon as Trump’s nominee is appointed and confirmed) U.S. Supreme Court, the Affordable Care Act – aka Obamacare – is likely doomed. And, as Washington Post reporter Greg Sargent pointed out, a whole lot of Trump voters are among those who will have their own healthcare coverage yanked away as a direct result. 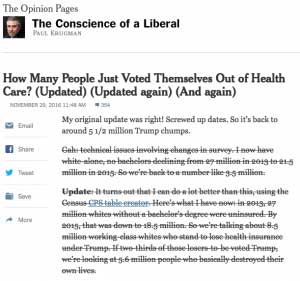 Unfortunately, as Krugman readily admits, he was unusually sloppy about some of the numbers and had to go back and redo them a couple of times:

Krugman looked at the big national picture, breaking out Census data and Trump supporters by ethnicity and so forth. However, as one intrepid soul noted …

OK, first we have to set the ground rules: Seeing how the Republican Party is now salivating at the thought of eviscerating Medicare and traditional Medicaid as well as the Affordable Care Act, for this exercise I’m looking purely at what would happen if the ACA itself was wiped out. I’m assuming, that is, that non-ACA Medicaid would stay pretty much as is (which isn’t likely, but that’s a different topic). We’re also assuming the ACA would have the plug pulled almost immediately upon Trump takes office – as early as February 1st, 2017 (which, believe it or not, could potentially happen).

The general number used is that “20 million people” would lose their healthcare coverage in that instance, but it’s not quite that round a number:

MEDICAID: Since the ACA was signed into law, Medicaid enrollment has increased by about 16.7 million people. Of that, as far as I can tell, roughly 1.1 million are those who became eligible for traditional Medicaid due to normal economic changes and population growth, while another 4.2 million were already eligible for traditional Medicaid anyway, but were encouraged to “come out of the woodwork” and enroll thanks to the streamlined process and education/outreach effort of the ACA.

These people would theoretically still be eligible for traditional Medicaid even if the ACA were repealed tomorrow, so they have to be subtracted from the carnage. That leaves around 11.3 million people who are only eligible for Medicaid thanks to the ACA itself. Of these, about 1 million were transferred to Medicaid from existing state-based low-income healthcare programs … which programs are now mostly defunct, I would imagine, since there was no longer much need for them post-ACA.

According to the August 2016 CMS Medicaid/CHIP report: 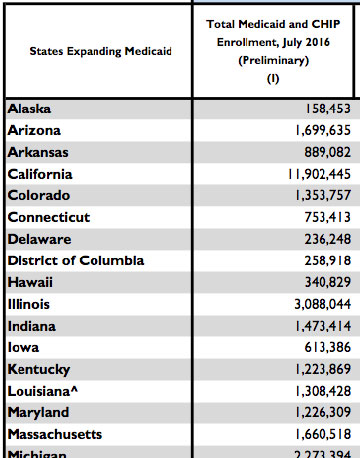 In states which did expand Medicaid, Medicaid/CHIP enrollment has increased by 13.3 million since September 2013, plus another 1.0 million pre-2013. Around 11.3 million of these 13.3 million would lose coverage, or approximately 86 percent of them. This won’t be spread evenly, of course: 650,000 of the 950,000 “pre-2013 transfers” came from California alone, for instance. More on this below.

In states which didn’t expand Medicaid, Medicaid/CHIP enrollment has increased by 2.4 million since September 2013. All 11.4 million who would lose Medicaid in the event of a full ACA repeal come from the expansion states only, so I don’t really have to worry about the non-expansion states in this instance.

BASIC HEALTH PLAN: The BHP program has only been taken up by 2 states so far: Minnesota (which actually retooled their existing MinnesotaCare program to become the BHP program) and New York.

The MN program actually had more people enrolled in it before the ACA (136,000 in December 2013) than it does now (90,500) … but since I believe it’s funded by the ACA exclusively now, I presume it would take some time before state funding would be restored, so those people would still lose coverage in the meantime. New York, in the meantime, has 380,000 BHP enrollees … all of whom would lose coverage without ACA funding.

INDIVIDUAL MARKET: As of this moment, I’m assuming there are roughly 9.2 million people enrolled in effectuated ACA exchange policies. For the 2017 Open Enrollment period, I’m assuming roughly 13.8 million will select QHPs by the end of January … but only around 12.4 million of them are likely to actually pay their first monthly premium.

Of those, around 85 percent – or 10.6 million – will likely be receiving APTC assistance, and some of those will only receive nominal amounts (say, $20/month or so). Let’s call it 9 million people receiving substantial APTC subsidies and/or CSR assistance … that’s how many would likely be unable to afford their policies at all.

Note that for the moment I’m assuming that no one paying full price for their individual market policies would lose them, although, again, that’s still a possibility as well.

1.4 million who were able to stay on parents’ plans

SUB26ERS: This one gets trickier. These are the young adults aged 19-25 years old who are enrolled on their parents’ policies specifically thanks to the ACA provision mandating this. It’s very tricky to get an exact number on this for several reasons, however: For one thing, many states already had this requirement pre-ACA. In addition, in some of those states, the cut-off age is higher than 25. The narrow age window (18-25) means there’s a huge churn factor. Finally, unlike those who’d lose Medicaid and subsidized indy policies, at least some of these millennials would presumably be able to afford a half-decent policy on their own.

According to the HHS Dept., as of December 2011, approximately 3.1 million “sub26ers” were enrolled in healthcare policies specifically due to ACA provisions. They even broke out state-by-state approximations. Obviously those numbers could have easily changed in the 5 years since then, but it’s all I have to go on.

I plugged these into a spreadsheet, along with these notes regarding the pre-ACA state laws on the books in 37 states; I’m assuming that if the ACA were repealed, the requirements would revert back to those pre-existing laws, meaning that not all of those 3.1 million would lose their coverage. As shown in my spreadsheet below, I estimate that approximately 1.4 million would be kicked off of their policies.

Did millions effectively vote their coverage away?

OK. So far that’s 11.3 million who would lose Medicaid, 9 million who’d lose significantly-subsidized individual policies, around 471,000 who’d lose BHP coverage and 1.4 million sub26ers. Add them up and it comes to 22.2 million people total who would lose their healthcare coverage. For specifics, take a look at the spreadsheet at the right showing who gained coverage – and who would lose it under repeal – by state.

In many expansion states, I have hard “expansion-only” numbers on hand from either 2015 or 2016; the links to these sources can be found here. In states where I couldn’t find a specific number, I assumed that 79 percent of the net Medicaid increase since 2013 is expansion-specific. The rest of the spreadsheet should be pretty self-explanatory.

Whew! OK, that’s the first part of the answer. Next, we need to break it out state-by-state and compare that against the Trump voting population in each.

Who ‘slit their own throats’? 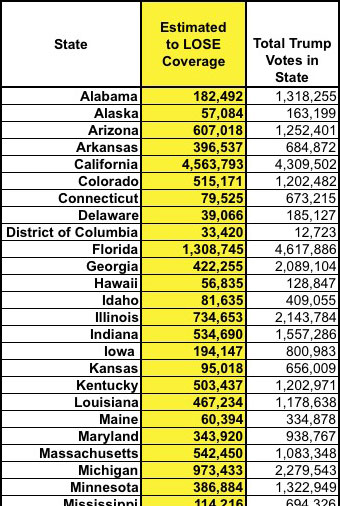 The problem now is figuring out how many within each state voted for Donald Trump (and presumably the rest of the Republicans on the ticket), thus ensuring that they’ve effectively slit their own throats.

Unfortunately, it’s not a simple matter of plugging in Trump’s voting percentage in each state. Just about every one of the 22.2 million people above is going to be under 65 years old and under 400 percent of the Federal Poverty Line.

As shown in the spreadsheet, if I were to use a simple correlation between the number of people in each state who would lose coverage and the percent of voters in that state who voted for Trump, it would come in at around 9.8 million. However, that’s not even remotely reasonable to assume.

Krugman came up with around 3.5 to 4 million, then updated his estimate to around 5.6 million, based on ethnic and income demographics.

Presumably the true number is somewhere between 3.5 million and 9.8 million. There’s a lot of rounding and rough estimates here anyway, so let’s just call it somewhere between 4 and 9 million who just voted, as Krugman puts it, to destroy their own lives.

And again, this is just Obamacare. We haven’t even gotten into Medicare (around 55.5 million enrollees) or traditional Medicaid (about 62 million enrollees when you subtract the ACA expansion population). There’s some overlap between the two due to dual-eligibles, but you’re still talking about perhaps 108 million Americans enrolled in one or the other.

If the GOP guts those programs as well, you’re looking at a total of 130 million people – 40 percent of the nation – whose healthcare coverage is now at risk.

But at least he didn’t send email over a private server or anything. So you know, there’s that.