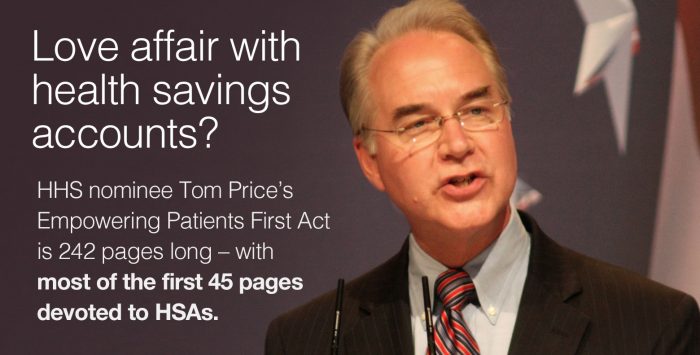 President-elect Donald Trump has named Rep. Tom Price (R-Ga.) to be the next Secretary of Health and Human Services. Assuming he’s confirmed by the Senate, Price will be a powerful figure in the future of healthcare reform, helping to shape the Trump Administration’s approach to where we go from here. And we can be fairly certain that it’s going to include a lot more focus on health savings accounts (HSAs).

Since 2009, Rep. Price has been promoting his Empowering Patients First Act. The most recent version, H.R. 2300, was introduced in 2015. The bill is 242 pages long, and most of the first 45 pages are devoted to HSAs. They also figure prominently into most of the other Republican health care reform proposals, although the idea is that they’d work in unison with numerous other provisions; none of the proposals call for HSAs to be the only major tenet of reform.

Why the GOP loves HSAs

HSAs fit nicely into the GOP health care reform narrative: Ostensibly, high-deductible health plans (HDHPs) and HSAs encourage patients to be active shoppers, seeking out the best value in care, and thus lowering overall costs via free-market mechanisms. (In reality, this is much harder than it sounds, and price transparency is still woefully lacking in most states.)

High-deductible health plans also curb overutilization of healthcare, since enrollees are less likely to seek non-essential care when they have to pay the whole bill themselves, as opposed to just a copay. (Before the deductible is met, HDHPs only pay for preventive care.) Less utilization does result in lower overall healthcare costs, but critics note that patients are also less likely to seek out necessary care when covered by high-deductible health plans, which can lead to higher costs and worse outcomes in the long run.

HDHPs/HSAs also put a certain amount of onus on individuals to dutifully save a portion of their income to cover their future medical expenses. In other words, they exemplify the personal responsibility factor that GOP health care reform advocates tend to favor. Similar grandiose notions of personal responsibility show up in Republican talking points against expanding Medicaid, when they cry foul over the idea of giving able-bodied low-income people access to government funded health coverage.

And as >Wendell Potter explains, HSA-qualified plans (and in general, most plans with high deductibles) also tend to be more profitable for insurers. In turn, that makes them more popular among politicians who are on the receiving end of insurance industry lobbying.

HDHPs and HSAs have become increasingly popular with employers and health plan enrollees over the last decade. The Kaiser Family Foundation’s annual employer health benefits survey found that 29 percent of workers with employer-sponsored health benefits were enrolled in HSA-qualified plans in 2016, up from just 4 percent in 2006.

The growing popularity of HSA-qualified plans might reflect genuine enthusiasm for HSAs. But it could also be related to the fact that healthy individuals tend to gravitate to lower-priced health plans with higher out-of-pocket exposure, and HSA-qualified plans tend to be among the least expensive options that employers offer.

By mid-2016, there were more than 18 million HSAs, holding more than $34.7 billion in assets. But it’s worth noting that many HDHP enrollees don’t establish an HSA at all, either because they don’t understand how the HSA works, or because they don’t have any extra money to put in the account.

High-deductible health plans and HSAs are already well entrenched in our health insurance system. So let’s take a look at how HSAs currently work:

In short, HSAs under current regulations are extremely tax advantaged: The money goes in tax-free, grows tax-free, and comes out tax-free, as long as it’s used for medical expenses. And HSA-qualified HDHPs are widely available, as they continue to work well with the ACA’s regulations.

How Price’s legislation would enhance HSAs

Whatever health care reform legislation is introduced in 2017 is likely to be a combination of various proposals Republican lawmakers have put forth over the last few years. But let’s take a look at how Price’s Empowering Patients First Act would enhance HSAs:

HSA funds could be used for additional expenses:

HSAs: Great for some, but not a universal solution

To be clear, I am not at all opposed to HSAs. But I do question their utility as a pillar of health care reform. Our family has had an HSA since 2006, and our high-deductible health plan fits well with our goal of keeping our premiums as low as possible. We’ve also been very fortunate in terms of not needing to use our health insurance over the years, so our out-of-pocket costs have been minimal.

But about 40 percent of Americans in their 40s have a pre-existing condition, and the percentage gets higher as people get older; a significant number of people do need to use their health insurance each year, and would need to have funds in their HSA to cover those costs.

Yet nearly half of Americans don’t have enough money to cover a $400 emergency. To imagine that HSA-centric legislation is going to create a seismic shift in Americans’ ability and willingness to save money is ivory-tower thinking, especially if it’s not combined with measures to ensure that everyone can earn a living wage.

Expanding and enhancing HSAs would absolutely benefit higher-income Americans who are looking for additional ways to shield their money from taxes. And it might also encourage more middle-income households to save for future medical expenses.

But as a healthcare reform strategy, relying heavily on stockpiled personal assets seems like a recipe for failure, particularly given the fact that so many Americans already struggle with finances, and given the fact that low-income people tend to be disproportionately represented among the population most in need of assistance with their health insurance.