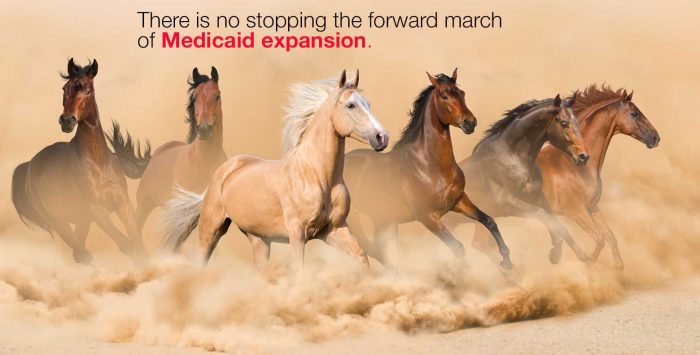 From the very moment the Affordable Care Act’s Medicaid expansion was enacted into law, it faced a wall of opposition – opposition that was strengthened by a Supreme Court decision that allowed states to refuse the expansion.

Despite that opposition, supporters have predicted ever since that states were going to come around eventually – that they would see the positive impact on their residents and that the financial incentives were simply too good to pass up. And the passage of time has certainly proven that true.

Of the original 26 states that opposed – and initially declined – Medicaid expansion, seven have since changed course. There are now more than 30 states that have made a decision to expand coverage – and several others are discussing plans to expand.

Opponents of the ACA’s Medicaid expansion have often cried foul, claiming that it provides taxpayer-funded health coverage for able-bodied adults who choose not to work, and rely instead on the government for everything from food to shelter – and now health insurance.

It’s true that there’s no work requirement in the ACA’s Medicaid expansion. The idea behind expansion was simply to provide a safety net for people who are struggling financially, including those living in poverty or just above it. (The cap on Medicaid eligibility under the ACA is 138 percent of the poverty level, which is currently less than $28,000/year for a family of three.)

The lack of a work requirement is purportedly one of the reasons some states still haven’t expanded Medicaid coverage. But a new analysis from Families USA highlights the fact that Medicaid expansion has significantly expanded the percentage of working adults who have health insurance.

Rather than looking at the overall uninsured rate, the Families USA study analyzed the change in the uninsured rate for working adults ages 18 to 64. And the results are clearly indicative of the fact that Medicaid expansion increases the percentage of the workforce that has health insurance. These are people who have jobs, and most of us rely on their services (food industry, retail, etc.). But they wouldn’t have health insurance without Medicaid expansion.

In a recent press conference, HHS Secretary Sylvia Burwell noted that “helping people who are working and playing by the rules is something that is an important concept most people agree on” and highlighted the fact that many of the people who are uninsured as a result of states opting out of Medicaid expansion are folks who have jobs.

Of the 27 states where the average reduction in the uninsured rate among working adults was lower than the national average, 22 were states where Medicaid was not expanded. The visual depiction of the results of the analysis (on page 3 of the report) is striking in terms of how clearly Medicaid expansion is impacting the insurance coverage of the country’s workforce.

The ACA called for the federal government to fully fund Medicaid expansion from 2014 through 2016, with the states then gradually picking up a small portion of the cost starting in 2017, and paying ten percent of the cost by 2020. (The 90/10 split will remain at that level going forward.)

But that was before states gained the ability to opt out of Medicaid expansion, which didn’t happen until a 2012 Supreme Court ruling. As a result, just 26 states expanded Medicaid as originally scheduled in 2014. To date, 31 states have expanded Medicaid, including Louisiana, where expansion is expected to take effect this year.

So a state that agrees to expand Medicaid starting in 2017 will be on the hook for 5 percent of the cost of expansion from the get-go, because 2017 is the first year that states were to be responsible for a portion of the cost of covering the newly eligible population.

In an effort to entice some of the 19 holdout states to expand Medicaid, President Obama’s budget proposal for the 2017 fiscal year includes a provision – which would have to be approved by Congress – for the federal government to fully fund the first three years of Medicaid expansion in every state, regardless of what years those happen to be. If approved as part of the budget, this would allow a state to expand Medicaid starting in 2017 and not have to begin paying part of the cost of covering the newly eligible population until 2020.

So what’s going on in the 19 states that haven’t expanded Medicaid? All but two have Republican governors, although nine of the governors (including both Democrats) are at least somewhat supportive of Medicaid expansion in some form.

And several of the states have expansion bills that have been introduced in the current legislative session, although most of the bills face an uphill battle.

If states want ACA funding to expand Medicaid, they must either do so as called for in the ACA, or must obtain approval for modified expansion from CMS under a Section 1115 waiver.

Here’s what’s happening in each state. (Links to legislation include real-time tracking through the legislative process, so you can use this page to see how these bills fare during the legislative session.):