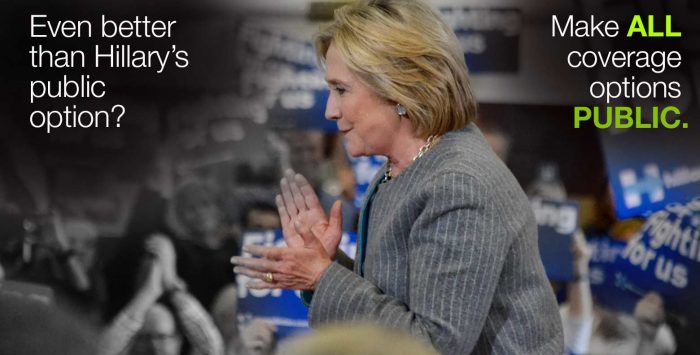 Continue to support a “public option” – and work to build on the Affordable Care Act to make it possible. As she did in her 2008 campaign health plan, and consistently since then, Hillary supports a “public option” to reduce costs and broaden the choices of insurance coverage for every American. To make immediate progress toward that goal, Hillary will work with interested governors, using current flexibility under the Affordable Care Act, to empower states to establish a public option choice.

The public option, you may recall, was a part of early versions of the ACA that the most conservative Democratic senators killed before the final bill passed the Senate. It was envisioned as a government-run health plan that would work to keep costs low. Private insurers in the marketplace would have to compete against it.

Clinton’s proposal highlights the fact that there’s actually nothing in the ACA to prevent a state from forming its own public option, if it’s so inclined. Like the private plans in the state marketplace, though, the public plan would have to negotiate rates with hospitals and doctors, and perhaps limit the network if it was committed to keeping rates really low. That might put some pressure on the private plans it was competing with to follow suit.

In itself, though, a public option might not change things much for those shoppers in the ACA marketplace who find the offerings too expensive. While the law provides excellent options to many of those whose income is below 200 percent of the Federal Poverty Level (FPL), many above that level find the premiums and out-of-pocket expenses a heavy lift. For subsidy-eligible buyers, the difficulty comes not so much from the sticker price of insurance as from the ACA’s subsidy and benefit formula.

In that formula, the percentage of your income required to buy the benchmark Silver plan in your area rises with income. A solo buyer will pay about 3 percent of income for that plan if her income is $16,000, but about 8 percent if she earns $29,000. If my income is $29,000, it doesn’t matter to me whether the premium paid to the insurer is $400 or $250: my subsidized premium for the benchmark Silver plan will cost $195, give or take a dollar or two, and the plan will be designed to cover 73 percent of my costs, which may leave me with a deductible of about $2,000. If I opt for a cheaper Bronze plan, the out-of-pocket costs will be much higher.

Coverage that’s affordable for all applicants?

There is potentially a way, though, that a state could make coverage more affordable for all applicants. That would be to make all options public – in the way that Medicare Advantage or Medicaid managed care plans are public.

In those programs, privately managed plans are paid by the government and so constrained by government payment rates, which are much lower than the rates fully private insurers usually pay. Both Medicaid managed care and Medicare Advantage are stable, profitable businesses for insurers.

To create an “all-public” exchange, a state would have to avail itself of the “flexibility under the Affordable Care Act” that Clinton alludes to. Beginning in 2017, the ACA empowers states to propose alternate schemes to provide affordable insurance to their residents, provided the alternative meets the ACA standards for affordability and comprehensive coverage. To fund approved schemes, the federal government will provide an amount equivalent to what it would have paid to provide subsidies the enrollees in the state’s conventional ACA marketplace.

A model for an “all-public exchange” already exists, in the form of Basic Health Plans (BHPs) established under the ACA by Minnesota and New York. The ACA gives states the option of forming BHPs, which are essentially managed Medicaid plans offered to enrollees with incomes between 139 percent and 200 percent of FPL. BHP enrollees have a choice among managed care plans, albeit a fairly limited choice.

BHPs have low premiums and low cost sharing. New York’s BHP, dubbed the Essential Plan, is free for enrollees with incomes up to 150 percent FPL and $20 per month for those with incomes in the 150-200 percent FPL range. The actuarial value ranges from 95-99 percent – higher than anything offered in the ACA private plan market, and also higher than almost any employer-sponsored plan. The federal government funds the BHP to the extent of paying 95 percent of what it would have paid in premium subsidies had the enrollees bought private plans in the ACA marketplace.

A state that forms a BHP could potentially seek an ACA “innovation waiver” to extend BHP eligibility either to 400 percent FPL, the eligibility cutoff for private plan subsidies under the ACA, or to anyone at any income level who lacks access either to employer-sponsored insurance or to another public insurance program.

As it happens, in November 2009, before the ACA was passed, a New York nonprofit, Community Service Society, produced a plan for the state that would have done just that – and then some, as it would have given employers the option of buying in. (In 2013, CSS produced a plan outline and cost estimate for the state’s BHP that did a good job scoping out the costs and target population as it actually played out. )

Authored by Elisabeth Benjamin, CSS’s VP of health initiatives, and Arianna Garza, the Cornerstone for Coverage Plan would have used New York Child Health Plus plan (CHP), which was the prototype for the national Children’s Health Insurance Program, as the building block of a low-cost public program available not only to the uninsured but to the underinsured. Here is the core proposition:

Cornerstone would be available to all children, adults, and employers in New York. By extending the residency rules of the existing CHP program to all New York adults, every New Yorker below the age of 65 would be given the option to participate in the program with sliding-scale premiums based in income. The recently enacted employer and union buy-in to the FHP program would be available to all employers in New York State. This would allow all employers and small businesses to leverage the purchasing power of the State to get affordable coverage for their workers.

Cornerstone extends the existing rules in the State’s CHP program. As with CHP, all uninsured New York State residents up to age 65 would be eligible on a sliding scale basis, regardless of immigration status.

The key words here are “leverage the purchasing power of the state.” The proposal rests on the alleged strength of New York’s existing public programs, Family Health Plus and CHP – to field affordable and presumed-adequate networks.

Here was the proposed pricing as of 2009: 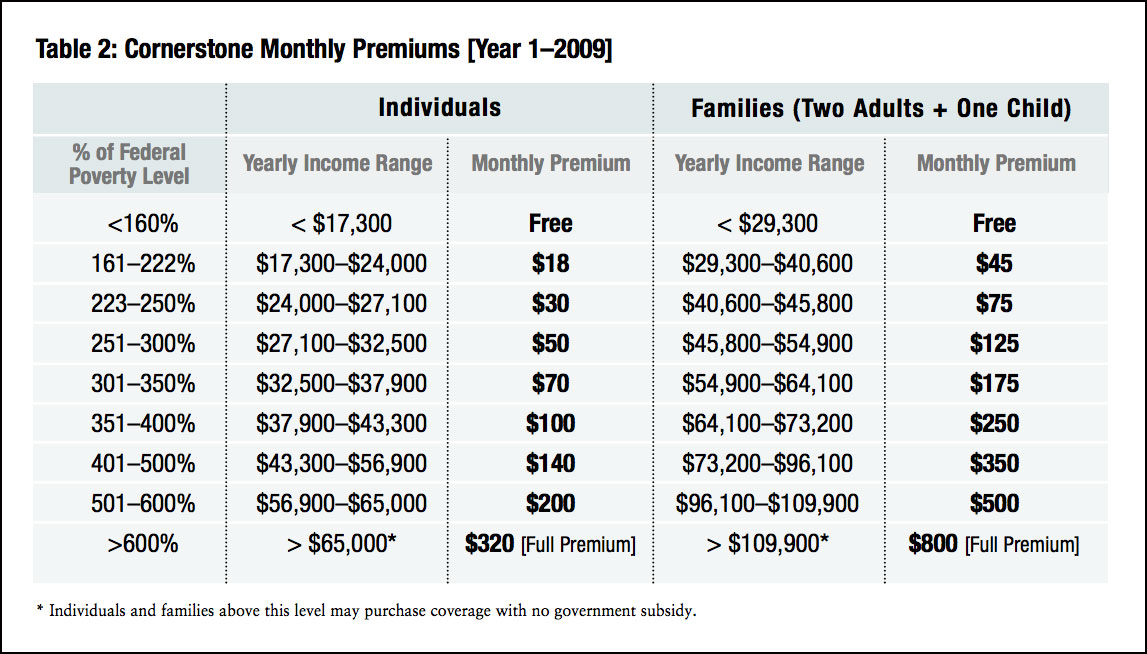 New York is halfway there

If this plan sounds a bit Utopian, keep in mind that New York has already got half the loaf. Fifty-four percent of last year’s enrollees in subsidized private plans had incomes under 200 percent FPL, which qualifies them for the Essential Plan (the BHP) if their income remains the same. Yet the ACA has left large numbers of New Yorkers who would have been eligible for the Cornerstone plan with far less affordable options.

Roughly a quarter of those who bought plans on the state exchange earned too much to qualify for any subsidy – and New York’s unsubsidized plan premiums are among the highest in the nation. Almost half of those who did get subsidies had incomes over the 200 percent FPL threshold, and so would have to pay somewhere between 6.3 percent and 9.6 percent of their income for a benchmark Silver plan. Cheaper Bronze plans carry a $3,500 deductible in New York (which is actually lower than that of most Bronze plans offered throughout the country).

Recall that in the Cornerstone plan, no one under 300 percent FPL would have paid more than 3.3 percent of income for a plan with minimal cost sharing. The Essential Plan has met that affordability standard for those with incomes up to 200 percent FPL – in concert with the ACA’s expansion of Medicaid eligibility to adults with household incomes up to 138 percent FPL That’s the half loaf.

A blue-state blueprint for affordable care?

Could New York use an ACA “innovation waiver” to implement something like all or part of the Cornerstone plan? That is, to offer the Essential Plan either to residents with incomes up to 400 percent FPL, or to all residents who lack employer-sponsored insurance – or even to employers and employees who wanted to buy in?

I posed the question to Elisabeth Benjamin, author of CSS’s Cornerstone report, the BHP cost estimate, and a more recent report proposing that New York provide BHP coverage to undocumented immigrants. Would it be feasible to offer a “BHP for all?” “Yes, I think it is feasible,” she said.

To be clear, such a plan would wipe out New York’s current ACA private plan marketplace. We’re talking “repeal and replace” here, blue-state style. If that sounds radical, it’s less radical than the single payer proposal that will be on Colorado’s ballot in November. Full-scale single payer would replace employer-sponsored insurance as well, which insures the vast majority of adults under age 65.

In the near future, New York is likelier to move in the direction of extending coverage to more noncitizens than to improve coverage for all residents over 200 percent FPL. (Note that the Cornerstone proposal also envisioned opening the plan to undocumented immigrants.) Nonetheless, the Cornerstone plan offers a tantalizing blueprint for making coverage more affordable to those who are poorly served by the ACA. Any state with a strong Medicaid managed care and/or CHIP infrastructure might take that blueprint up.

On the downside, provider networks would likely be narrower than those of many plans offered on ACA exchanges. But competition is relentlessly narrowing those networks in any case, and in many regions cheap plans with narrow networks have outsized market share. On the upside, premiums and out-of-pocket costs would be radically lower than they are for ACA marketplace customers – that is, care would be truly affordable.

Moreover, in such a scheme competition would exist among MCOs, as it does to a limited extent in the BHPs in New York and Minnesota. And over time, if low prices pulled in more of the uninsured (and underinsured) than the ACA exchanges have succeeded in doing, more doctors and hospitals might be pulled in, notwithstanding low payment rates. In other words, the “public-only options” might put real downward pressure on the prices we pay providers for healthcare – the only way, ultimately, to make care genuinely affordable.

EDITOR’S NOTE: More information about the financing of New York’s Essential Plan, and potential financing of a “BHP for all,” is available here.