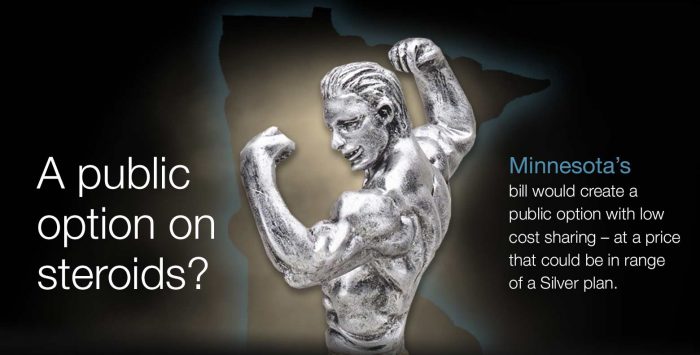 A bill introduced in the Minnesota state senate last month would create the first real “public option” in a state ACA marketplace. In fact the plan, if implemented, would create a state intervention in the marketplace more sweeping than the public option as generally understood by those who conceived the basic architecture of what became the Affordable Care Act.

The bill, SF2859, would allow health insurance shoppers of any income level to buy into MinnesotaCare, the state’s Basic Health Plan (BHP). The ACA gives the states the option of forming BHPs, state-run health plans with very low cost sharing for residents with incomes between 139% and 200% of the federal poverty level (FPL). To date, Minnesota and New York are the only states to offer a BHP. Those who are eligible for the BHP are ineligible for tax credits to buy private plans in the ACA marketplace.

In keeping with ACA requirements for BHPs, MinnesotaCare currently has an actuarial value (AV) of 94% – that is, it covers 94 percent of the average enrollee’s annual medical costs. In 2016, premiums were raised and AV reduced from 98%. Premiums in 2016 range from $0 for those at the lowest rungs of eligibility to $25 per month for a single person with an income of $16,478 to $80 per month for those with household incomes of 200% FPL, the eligibility ceiling – $23,340 for an individual in 2016. Here’s what copays look like for MinnesotaCare enrollees:

The benefits are comparable to what the lowest income enrollees (under 150% FPL) in the ACA private plan marketplace in other states get if they buy Silver plans and access Cost Sharing Reduction (CSR) subsidies. Shoppers in Minnesota’s ACA marketplace, MNSure, however, can’t buy comparable coverage. The nearest they can come is a Gold plan with an actuarial value of 80%. That’s far below the AV 94% currently offered by MinnesotaCare. (The ACA also provides for Platinum plans, with AV 90%, but they’re not sold in the Minnesota marketplace.) You could say that offering MinnesotaCare for sale would be like offering Cost Sharing Reduction to Minnesotans of all income levels. But only in one (public) plan.

Unlike launching the BHP, making MinnesotaCare available to buyers with incomes over 200% FPL would alter the ACA’s marketplace structure and subsidy scale, and so require an “innovation waiver” from HHS. Two elements of the proposal, taken together, suggest it would entail a fundamental restructuring of the state marketplace.

Moreover, State Senator Kathy Sheran (DFC-Mankato), the bill’s sponsor, said in an email that MinnesotaCare might possibly be offered at the a cost comparable to that of Silver plans, which have an AV of just 73% for enrollees with incomes in the 200-250% FPL range, and 70% for buyers with higher incomes.

If the actuarial analysis and pricing pan out as envisioned, MinnesotaCare would be roughly a Platinum-equivalent plan offered for the price of Silver to all comers, at any income level. That’s currently more or less what the ACA offers to enrollees with incomes under 200% FPL – but not above that threshold.

Concretely, how would MinnesotaCare compare with private plans in the ACA marketplace (or ACA-compliant plans outside it)? In Mankato, the largest city in Senator Sheran’s district, the benchmark Silver plan for those with incomes over 250% FPL has a $2,600 deductible for an individual, with $30 copays for doctors’ visits and 40% coinsurance after the deductible is reached for most other services. The yearly out-of-pocket maximum is $5,750 per person.

Coverage would be only slightly better for those with incomes up to 250% FPL. Needless to say, MinnesotaCare at AV 87% (or higher – 87% is the minimum) would offer much more comprehensive coverage, albeit probably with a narrower provider network than that offered by some private plans.

Passing muster with the feds

To obtain a federal waiver to implement such a program, Minnesota would have to demonstrate that the offering would not “detrimentally impact other parts of the market,” according to Senator Sheran – that is, the private insurance market, on MNSure or off it. Sheran suggests that some shoppers for insurance might opt for cheaper Bronze levels plans (AV 60%), or be willing to pay more for a private Silver plan, perhaps (I assume) to get access to a larger network of doctors and hospitals, or just to keep their current providers.

If MinnesotaCare really is offered at a Silver-range price to all comers, however, its effective discount would be so huge that it’s hard to envision many buyers choosing anything else. It is a public option on steroids – offering not just a low-cost version of the Silver plans that are the marketplace’s norm, but a richer benefit set. To obtain a waiver, Minnesota officials would have to convince the federal Department of Health and Human Services that the offering would not eviscerate Minnesota’s individual market for health insurance, on- and off-exchange.

That might be a hard case to make. All plans in Minnesota’s individual market are sold on a nonprofit basis – but private plans pay higher rates to providers than does MinnesotaCare. Premiums climbed steeply last year, and state legislators sponsoring this legislation aver that private coverage is particularly unaffordable in rural areas. Would a MinnesotaCare buy-in option push private market prices down, or spur private market exits? Would private plans compete on the basis of offering superior provider networks for those willing to pay more?

Lynn Blewett, a health policy professor at the University of Minnesota, recalls that there was a time when the state did allow higher income residents to buy in to MinnesotaCare. “That didn’t wreck the individual market – though at that time we had a high risk pool that helped stabilize the market. There might be other policy levers that would do the same” if MinnesotaCare were offered on a buy-in basis. But the bill, said Blewett, might have to be adjusted so that MinnesotaCare competed on a like-to-like basis – that is, be offered at an actuarial value matching one of those in the ACA marketplace.

Back to the future with MinnesotaCare

The imperative to render health coverage truly affordable is in Minnesota’s DNA. MinnesotaCare long pre-existed the ACA, and prior to 2015 it was available to parents with incomes up to 275% FPL and childless adults up to 250% FPL. In 2015, it became a BHP to take advantage of federal funding available to such programs – which cut eligibility off at 200% FPL. Those formerly eligible above that income level (200-275% FPL) had to switch to subsidized private plans in the ACA marketplace, which were much more expensive and offered far skimpier coverage. Someone earning 201% FPL ($23,341) has to pay 50 percent more for a benchmark Silver plan than she would pay for MinnesotaCare if she earned a dollar less – and loses 21 points of actuarial coverage (AV 73% vs. AV 94%).

In January, a state Task Force on Health Care Financing appointed by the governor recommended extending MinnesotaCare eligibility back to 275% FPL. Doing so would encompass the vast majority of subsidy-eligible insurance seekers but would leave those with incomes above that level with more expensive options, as the risk pool in the private market would be at least moderately thinned (37,000 were projected to enroll in the 200-275% FPL income range). A bill introduced in the Minnesota House of Representatives, HF2491, would implement a plan like this – though the Republican majority is unlikely to pass it.

The Senate bill is more radical – at least, if it provides significantly better coverage at lower cost to those who earn too much to qualify for subsidies. Unsubsidized enrollees are currently the vast majority in Minnesota’s individual market. It too is unlikely to become law in its current form in the current legislative session – but it could be a harbinger of things to come.

A step toward Single Payer?

If the plan to offer MinnesotaCare to all comers does eventually become law and obtain a federal waiver, it’s possible to imagine that over time it would effectively render the state “single payer” for everyone who lacks access to employer-sponsored insurance, Medicare or another public program (such as the military’s Tricare). Since MinnesotaCare is delivered through managed care organizations (MCOs) offering rival provider networks, it is already in a sense a public exchange for those who qualify: enrollees have a choice of plans, albeit a fairly limited one. If offered to all, it could squeeze out the private market – which, again, is nonprofit in any case and composed largely of the same organizations that service MinnesotaCare. The main difference is the rates they pay to healthcare providers.

State-level single payer plans have fired progressives’ imaginations. Last year Vermont’s governor scrapped such a plan, spooked by the steep tax increases it would require. A single payer proposal is currently on the ballot in Colorado – probably with little chance of passing, for the same reason.

On the other hand, states have a good deal of freedom, via innovation waiver, to reshape and strengthen ACA benefits. Several states have standardized benefits in plans offered in the marketplace. Massachusetts and Vermont sweeten ACA premium subsidies, which are particularly skimpy at higher income levels, with state supplements. Minnesota, which has a long history of commitment to affordable coverage, may eventually push forward with a public option that would render coverage more affordable (e.g., if the Democratic Farmer-Labor Party regains control of the state House of Representatives, which currently has a Republican majority). Just how much more affordable, and at what cost to the state’s private health insurance market, remains to be determined.