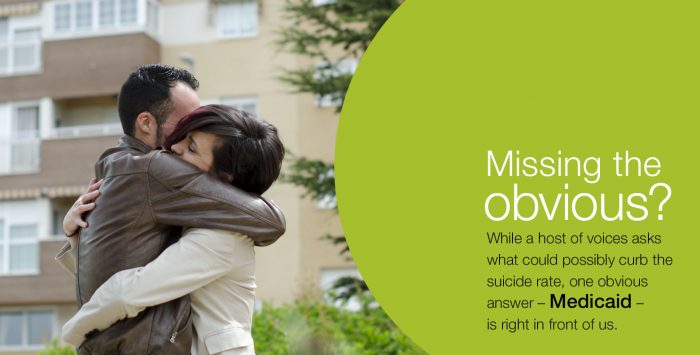 Researchers from the Centers for Disease Control and Prevention released results this week to document that suicide rates have increased by 24 percent since 1999. The increase has been especially rapidly among women and among middle-aged people of both genders between the ages of 45 and 64. This is just a huge problem. Quite properly, the story has gotten much play. This morning’s New York Times includes a front-page story: “U.S. Suicide rate surges to a 30-year high.”

I’m glad that the story has gotten so much attention. Yet the generalized calls to action seem oddly divorced from the actual policy levers through which we might reduce this problem. Here for example is my friend (and Twitter sparring partner) Ron Fournier:

Is this an epidemic? When do we start taking mental health policy seriously in DC and state capitals? https://t.co/37bOQBmOui

He asked the right question, but left things oddly hanging when the most obvious answer was staring him in the face. The Affordable Care Act’s (ACA) Medicaid expansion to low-income adults remains the most important tool to provide treatment to those who need it the most.

Medicaid is crucial to these efforts for several reasons. Most obviously, it finances needed care for specific recipients who might not otherwise receive it. More subtly, Medicaid props up the entire ecosystem of safety-net care which otherwise is often stuck with unpaid bills.

It’s not easy. Low provider payments and other administrative shortcomings make Medicaid less effective than it should be. Policymakers and clinicians are still learning how to use Medicaid to its full potential. In states such as Illinois burdened by a tradition of poor governance, this is a complicated challenge. I’m involved in two randomized trials trying to get these details right in providing Medicaid-funded services for indigent criminal offenders who experience addiction or mental illness.

Across the country, the biggest challenge in Medicaid is simpler: Many states with the worst public health problems are specifically denying Medicaid coverage to their lowest-income citizens.

There is good reason to believe that these ungenerous states are harming people’s mental health. The Oregon Health Insurance Experiment (OHIE) allocated Medicaid coverage by lottery between a treatment and a control group. Those selected to receive Medicaid displayed surprisingly large and immediate reductions in depressive symptoms and stress. These mental health benefits were especially striking because that same experiment provided disappointingly equivocal findings regarding Medicaid and physical health.

The mental health benefits of Medicaid did not particularly arise from improved treatment. People were less depressed and stressed because they had less anxiety over medical bills or what would happen if they became seriously ill. Indeed that appears to be one of the most important concrete benefits of health reform. The number of Americans reporting delaying medical care for financial reasons has declined by about one-third since 2010. That’s good for physical health. It seems to be even better for mental health, too.

This week, the National Bureau of Economic Research released an analysis of credit report data across the states. Using complex statistical methods to examine debt patterns in areas most affected by ACA, the authors concluded that Medicaid expansion was associated with between a $600 and $1000 decline in collection balances among individuals who gained coverage. That’s a big effect. It suggests that Medicaid expansion spared many people serious financial hardships. Since many of these debts would never have been paid, these same findings suggest important benefits to medical providers, too.

It’s coincidence that suicide data was released the same week as this NBER study of medical debt. The timing was perhaps fortuitous. The psychiatric literature is far from definitive, but I find studies linking personal debt, referrals to collection agencies, and heightened risk of self-harm all-too compelling. Medicaid expansion probably wouldn’t dramatically reduce suicides. But it would help.

Why your state’s investment in mental health matters

When states face serious economic and mental health problems, one might think that they would at least try to reduce these burdens through Medicaid when the federal government foots virtually the entire bill. Apparently not.

Suicide is only the most extreme issue at stake among the three million low-income Americans caught in the Medicaid gap. A 2015 analysis by Wen, Druss, and Cummings documents increased access to mental health and drug treatment services in states that have expanded Medicaid. An analysis performed by disability experts at the Department of Health and Human Services concluded that expanding Medicaid in every state would lead more than 350,000 people to experience reduced symptoms of depression.

In recent months, the state of Michigan has faced intense criticism for its failure to provide safe drinking water to children in Flint. These criticisms were justified, given the appalling failure of government to protect some of the states most politically and economically vulnerable citizens. States’ rejection of ACA’s Medicaid expansion is no less appalling.

Non-expansion states – many of which experience widespread and painful mental health problems – are denying key benefits to low-income residents who desperately need help. Legislatures and governors are doing so out of partisan spite, since the federal government would pay more than 90 percent of the accompanying costs.

In an unknown, perhaps unknowable number of cases, the consequences are lethal.

1. Montana and Louisiana, two other states with high suicide rates get partial credit. They were non-expansion states in 2014, but have since accepted the Medicaid expansion.