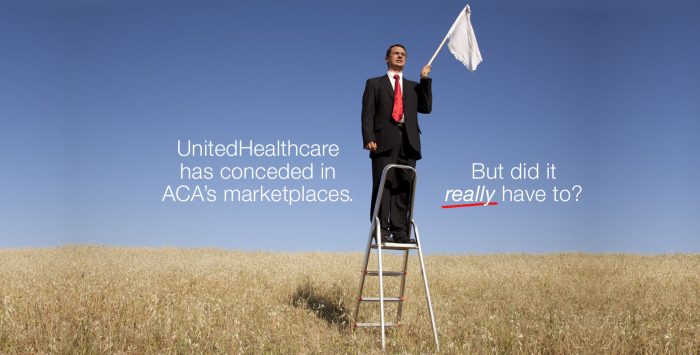 Early this week Centene, a health insurer that has fielded low-premium, high-deductible plans in many ACA marketplaces, announced that it was achieving the profit margins it aimed for in the marketplace. That’s in marked contrast to United Healthcare, the nation’s largest health insurer, which expects to have lost roughly a billion dollars in the ACA marketplace by the end of this year – and recently announced that it was withdrawing most of its offerings there.

The ACA marketplaces are quite competitive, which means winners and losers. Centene: winner. UnitedHealth: loser. https://t.co/YBsX6mVBu4

Why is Centene thriving, UHC diving?

Therein lies a bit of a mystery. Why has Centene thrived and UHC dived in the marketplace? For an insurer, what are the elements of ACA marketplace success?

On one level, the answer appears simple. Centene’s core business has historically been managed Medicaid. It knows how to create narrow networks and pay low rates to healthcare providers – and in the ACA marketplace, that’s just what it’s done. It also sets high deductibles, which along with the narrow networks deter sicker customers and attract healthier ones. Moreover, those high deductibles don’t much affect the half of ACA marketplace enrollees who access strong Cost Sharing Reduction subsidies.

UHC’s overall corporate orientation is quite different. It’s the national leader in employer-sponsored health plans, which insure the majority of U.S. residents under age 65 – about 150 million of them, compared to just 12.7 million enrollees in the ACA marketplace. Provider networks tend to be much more robust in employer-sponsored plans than in the individual market, and UHC’s large-market ACA offerings reflect that: their plans tend to have wider networks and higher premiums than competitors’.

I noted recently that in several large cities in the ACA marketplace, Centene’s Ambetter brand strongly undersells UHC (and generally undersells its other competition as well):

A tale of seven cities where two carriers compete

A tale of two UHCs

Those numbers tell a pretty clear tale. But it’s not the whole story. The fact is, UHC is also a major Medicaid MCO (including in the three cities marked in red above). Presumably it could field Medicaid-like networks and pay Medicaid-like rates if it wanted to. And in fact, in many ACA marketplace regions it does – just not in the larger ones.

In many smaller and more rural markets, UHC is price competitive. According to an analysis by the Urban Institute’s Linda Blumberg and John Holahan, UHC sells the cheapest or second-cheapest Silver plan in about half the markets in which it operates, but most of them are small and/or rural.

That raises the question: why is UHC withdrawing most of its marketplace offerings, instead of replicating the low-cost narrow network model? The Iowa marketplace provides some hints.

What’s the matter with Iowa?

UHC is withdrawing from the Iowa marketplace in 2017. At the same time Wellmark Blue Cross & Blue Shield, the state’s dominant health insurer, which has stayed out of the marketplace to date, is entering it in 2017.

This year, UHC participates in the Iowa marketplace in 76 of the state’s 99 counties. 88% of Iowa’s marketplace enrollees live in those 76 counties, and in almost all of them, UHC is one of just three insurers. It’s also one of three managed Medicaid providers in Iowa’s newly revamped Medicaid program.

In Iowa, moreover, UHC is price competitive. In Iowa City, it offers the five cheapest Silver plans. In Cedar Rapids, it sells the benchmark second-cheapest. According to an analysis by the Kaiser Family Foundation’s Cynthia Cox and Ashley Semanskee, in 71 of the 76 Iowa counties in which UHC sold plans in 2016 it sold the cheapest or second cheapest Silver plan available.

In Des Moines, however, the state’s most populous city, it somewhat reverts to large-market type. Aetna’s Coventry brand offers cheapest and second-cheapest Silver there, with UHC in third place, about $30 above the benchmark for an unsubsidized 40-year-old.

According to commercial e-broker HealthSherpa, UHC’s provider networks in Iowa offer below-average numbers of specialists and hospitals – that is, they have relatively narrow networks.

Thus, by some basic measures, UHC acted rather like a Medicaid MCO in the Iowa marketplace, offering plans with low premiums and narrow networks. Superficially at least that looks like Centene’s recipe for marketplace success.

Despite competitive pricing and limited competition, UHC’s market share in the Iowa counties in which it participated in 2016 was just 19% –about 9,000 out of 48,311 enrollees in those 76 counties (there were 55,088 enrollees in the state as a whole). That despite the fact that in 73 of the 76 counties in which it offered plans, it has only two competitors  (though Wellmark would change that in 2017).

Why did UHC throw in the towel?

Why didn’t UHC sell more plans? Perhaps because it didn’t want to. Effective January 1 of this year, UHC stopped paying agent and broker commissions for plans sold in the ACA marketplace – an apparent harbinger of its exit from most ACA markets in 2017, announced some time later. The cutoff could partly explain the low market share. The relatively high price of UHC’s Silver offerings in the Des Moines area could also be a factor.

Why withdraw rather than try to compete? Iowa offers a snapshot of the kinds of local conditions that make the marketplace a tough region-by-region slog. Perhaps the dominant “local condition” is the neighborhood’s 800-pound gorilla, Wellmark – which has bided its time, and, again, is entering the marketplace effective Jan. 1, 2017.

Sarah Lueck, a senior policy analyst at the Center for Budget Policy and Priorities (and an Iowa native), notes that in Iowa, Wellmark “has longstanding relationships with people, and a dominant presence in that market.” Moreover, while remaining outside the ACA marketplace, “Wellmark has continued to keep a lot of nongroup business that they had already,” pre-ACA.

Wellmark’s large, loyal member base may have inhibited enrollment in the ACA marketplace. In Iowa, “There was a lot of subsidy eligibility that people weren’t aware of,” Lueck says. Wellmark’s absence was probably a contributing factor. “If you have a really big player and they’re not in the marketplace, there’s no reason they would be doing outreach.”

The numbers bear that out. At the end of the ACA’s first open enrollment season, which ended in April 2014, just 29,000 Iowans had enrolled in marketplace plans. In June 2014, Wellmark reported that the company had 130,000 members still enrolled in pre-ACA plans.* At present, Wellmark still has 90,000 Iowa members in pre-ACA plans and 30,000 in ACA-compliant plans sold outside the marketplace, according to an email from spokesperson Traci McBee. Marketplace enrollment was 55,000 as of the end of open enrollment on January 31 of this year. Wellmark’s large client base – more than double total marketplace enrollment – has reduced the risk pool for insurers participating in the marketplace.

While Wellmark’s position in Iowa may have distorted the ACA marketplace to an unusual degree, that peculiar circumstance highlights the extent of local variation in market conditions.

As a giant health insurer that is among other things one of the country’s largest Medicaid MCOs, United Healthcare has the resources to compete effectively and profitably in the ACA marketplace. But the company has apparently decided that the relatively small game is not worth the candle. As Iowa illustrates, every ACA market is different – and market conditions can differ as much within states as between them.

As a competitive arena, the marketplace will necessarily have its winners and losers, as Levitt emphasizes. But among established competitors at least, the threshold question is who wants to play.

* At the launch of the ACA marketplace on Jan. 1, 2014, the ACA allowed insurers selling individual-market health plans that did not comply with ACA coverage requirements to continue selling those plans if those plans had remained unchanged since March 23, 2010 when the law was enacted. Plans that had been altered or started since that time were to be cancelled as of January 1, 2014, when the ACA marketplace opened. When a firestorm of criticism arose as people in plans that had changed since 2010 started getting cancellation notices in fall 2013, the administration “grandmothered” more recent noncompliant plans, giving the states the option of permitting insurers to continue to sell them – as Iowa opted to do. Some ACA-non-compliant plans will remain available until December 31, 2017.