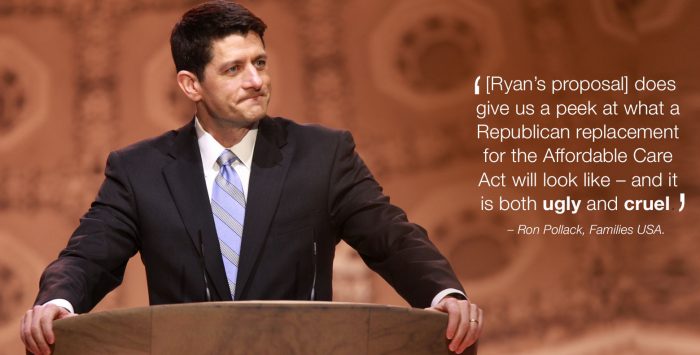 Recently, Speaker of the House Paul Ryan laid out his newest plan to undermine the Affordable Care Act – this time by allowing insurance companies to resume denying coverage on the basis of pre-existing conditions. Instead, he said, these consumers should be placed in separate high-risk pools run by the states.

“Less than 10 percent of people under 65 are what we call people with pre-existing conditions, who are really kind of uninsurable,” Ryan is quoted as telling a student audience at Georgetown University. “Let’s fund risk pools at the state level to subsidize their coverage, so that they can get affordable coverage. You dramatically lower the price for everybody else. You make health insurance so much more affordable, so much more competitive and open up competition.”

Ryan’s outlandish proposal is wrong on the facts and ignores recent history. But it does give us a peek at what a Republican replacement for the Affordable Care Act will look like – and it is both ugly and cruel.

First, Ryan’s claim that less than 10 percent of the population have pre-existing conditions that could cause insurers to either deny coverage is just flat out wrong.

In 2012, Families USA issued a report estimating that about 65 million non-elderly Americans – or about one-in-four – had a pre-existing condition that could lead to a denial of coverage. And this study was done using a very conservative approach. A study by the Department of Health and Human Services said the number could actually be as high as 50 percent – or nearly 130 million people.

That’s a lot of people who could potentially lose or be denied coverage under Ryan’s proposal.

But with his proposal, Ryan has also shown he has failed to learn from recent history that tells us that high-risk pools are both prohibitively expensive, offer substandard coverage, and must be supported with taxpayer dollars.

Prior to the Affordable Care Act (ACA), 35 states ran their own high-risk pools. But premiums could be as much as 250 percent over the state’s average premium, along with high deductibles, according to a report by the Commonwealth Fund. And the benefits in high-risk plans were not comprehensive, and there was usually a waiting period before a pre-existing condition would be covered.

The ACA also set up temporary high-risk pools to extend coverage to individuals with pre-existing conditions that ran from 2010 until the new provisions barring insurance company discrimination went into effect. But even with certain protections built in, these were still very expensive plans for both the consumers and administrators.

This is what Paul Ryan wants to go back to? It would be great a victory for the insurance industry, and those who place corporate interests above consumer interests, but it is a horrible deal for millions upon millions of Americans who will be shut out of needed, affordable care.

Finally, the very concept of insurance seems to elude Ryan. Yes, health insurance would be less expensive if insurers only wrote policies for healthy people and could drop them when they got sick – as they used to be able to do before the ACA. But that’s what insurance is about – we are pooling our risks. You may be healthy now. But almost all of us at some point in our lives will have health problems and will need the protections health insurance offers through our collective premiums.

Unfortunately, I believe this is just the first in a series of tired ideas Republicans will likely trot out in advance of the November elections. I’m sure we’re going to hear proposals to block-grant Medicaid; reduce and eliminate the ACA subsidies that make insurance affordable for millions of consumers; and allow the sale of insurance across state lines, which will encourage some insurers to locate operations in states with the weakest consumer-oriented regulations and oversight.

There’s going to be a lot at stake in this elections. And that means all of us who care about protecting the gains made through the ACA – and who want to improve the law – will have to be ready to fight back with the facts so consumers understand what these proposals will mean to them.