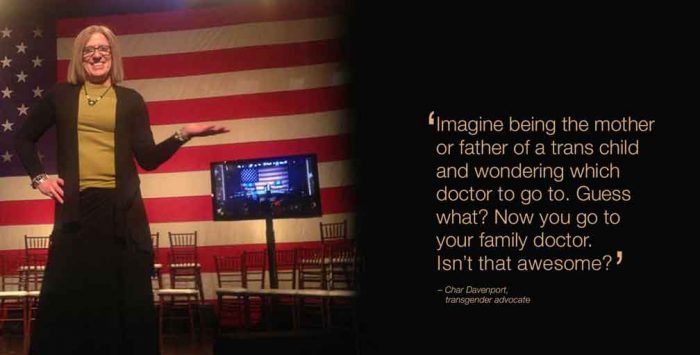 Imagine being in the emergency room and having the staff refuse to address you by your correct name or gender. Or having to wonder whether your family doctor will provide all the services your child needs with compassion. This has been the daily experience of far too many transgender people for far too long. But with the issuance of a final rule on Section 1557 of the Affordable Care Act (ACA), one more roadblock to full equality for the LGBT community has been removed.

Under the rule issued by the U.S. Department of Health and Human Services (HHS), all people are protected from discrimination in healthcare on the basis of race, color, national origin, age, disability and sex. This includes discrimination based on pregnancy, gender identity and sex stereotyping, which means expectations of heterosexuality – that men should only marry women, for example – or gender expression that conforms to a particular view, such as the idea that women should be feminine.

“The rule protects all LGBT people from discrimination in healthcare,” says Kellan Baker, a senior fellow at the Center for American Progress (CAP) and a steering committee member for Out2Enroll, a national initiative to connect LGBT people with health insurance options under the ACA. “The rule does not allow people to be treated badly because they’re LGBT. If they are treated badly, they have the ability to ask for protections, to ask for changes, to ask for the services and benefits we need.”

The ACA has always prohibited discrimination under Section 1557, but the final rule provides greater clarity, Baker says. The rule is especially important for transgender people, who are frequently denied medically necessary care related to gender transition, even though the same services and procedures are routinely covered for non-transgender patients.

Until now, only 17 states and the District of Columbia prohibited insurance plans from carving out transgender-specific exclusions that allow denial of services and care based on gender identity. This is not only about transition-related care, but basic healthcare services. Where those protections don’t exist, for example, an insurance or healthcare provider could refuse to give a transgender man a cervical cancer screening. For trans men, who were assigned female gender at birth and don’t always have hysterectomies, this is an essential preventive service that would never be denied to a cisgender woman (who identifies with the female gender she was assigned at birth).

According to Baker, the final rule on Section 1557 extends these lifesaving protections nationwide, for plans sold through the ACA insurance marketplace as well as coverage through Medicare and Medicaid, beginning with 2017 plans. The rule also confirms that individuals must have access to facilities and programs consistent with their gender identity.

Char Davenport, a transgender woman from Michigan, is overjoyed about the final rule.

“This changes everything,” she says. “Will there still be challenges? Yes, but it’s going to eliminate a lot of jumping through hoops so many transgender people have had to do to get the care they need.”

Although Davenport hasn’t been denied care specifically because she’s transgender, she’s frequently been mistreated by healthcare professionals. She has not yet had sex reassignment surgery (SRS), so doctors and nurses frequently insist on calling her by her birth name or referring to her with male pronouns instead of the female pronouns that match her gender identity – and that she requests they use. This practice of “misgendering” is humiliating, she says.

“It feels like I’m invisible – that I’m not a person to them,” she says. “It’s sexist and it makes me feel like I’m being objectified and judged by that objectification. That’s inappropriate, especially in a medical setting of all places.”

As a longtime transgender advocate, Davenport says the question she is asked most frequently by other transgender people is where they can find trans-friendly healthcare providers.

“It’s like the underground railroad of healthcare,” she says. “We don’t call it that, but that’s what it is.”

Because of this apprehension, it’s incredibly common for transgender people to simply put off necessary care until they have no choice but to go to the emergency room. At that point, care is more expensive – and there’s no telling whether the providers there will be respectful of their gender identity.

“By that time, you are so sick it can be a matter of life and death,” Davenport says. “Or imagine being the mother or father of a trans child and wondering which doctor to go to. Guess what? Now you go to your family doctor. Isn’t that awesome?”

It gets better when people speak out

Baker underscores that the final rule on Section 1557 doesn’t provide new protections. They’ve been in place since 2010, when the ACA was signed into law. But the clarity it provides is more important than ever in light of anti-LGBT laws like HB2 in North Carolina that seeks to strip all LGBT people of protections.

The HHS Office for Civil Rights has been accepting and acting on complaints from LBGT people for some time now, and those efforts will continue so that Section 1557 can be further strengthened moving forward. In fact, the final rule explicitly urges LGBT people who face discrimination to file a complaint at www.hhs.gov/ocr.

“We’ve come a long way in the last eight years under the Obama Administration,” Baker says. “We’ve come so far in our understanding of the rights and protections LGBT people have. But it’s important to remember that HHS can only continue strengthening these protections if people speak up and file complaints when they experience discrimination.”