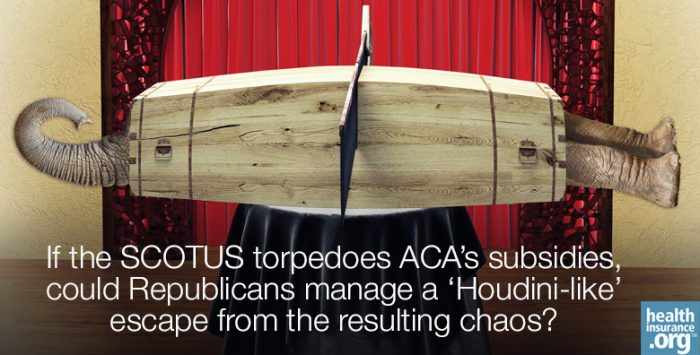 If the Supreme Court rules for the plaintiffs in King v. Burwell, barring the federal government from continuing to provide premium subsidies to Affordable Care Act customers in the 37 states using HealthCare.gov, how will the Republican Congress react?

Many Republicans welcome the chance to do nothing and cripple the ACA, en route to repealing it outright if they win the presidency and hold the Congress in 2017. Others balk at the prospect of uninsuring some 8 million current HealthCare.gov customers who would lose premium subsidies – and crippling state insurance markets when those customers disenroll.

Republicans of the latter sort of have floated several bills and lightly sketched proposals that would temporarily maintain the subsidies while repealing key provisions of the ACA – most notably the mandates requiring most Americans to obtain health insurance and most employers to offer coverage. President Obama would certainly veto such plans should Republicans manage to encode one in legislation and pass it – especially since the subsidy reprieves are temporary.

At the Health Insurance Exchange Summit held in Washington, D.C. this week, two relatively moderate conservatives, each of whom has shown some commitment to advancing universal coverage in the United States, came to a sort of consensus manqué regarding Republicans’ likely course should the Supreme Court rule for the plaintiffs in King.

Stuart Butler, a healthcare and urban policy scholar currently at the Brookings Institute who spent 35 years at the conservative Heritage Foundation, suggested that Democrats who wanted to preserve the ACA’s core framework and Republicans looking to alter it might find “Houdini-like” escape from their impasse by taking inspiration from the ACA’s “innovation waivers.” These waivers empower states to propose alternative schemes that meet the ACA’s coverage and affordability goals by different means. Under ACA Section 1332, states can propose changes to rules governing the structure of health plans and the state marketplace, subsidy formulas, and the individual and employer mandates – that is, to basically everything that could be changed within any plan to make coverage affordable for all Americans. These waivers can’t take effect until 2017 under current law.

Butler spoke hopefully of a “superwaiver process” that would speed up the timeline and ease the application process,  giving states more freedom to shape their health insurance markets with less oversight from the federal government.

Butler has a unique pedigree among conservatives engaged in healthcare reform. In 1989, he devised a health plan that included – many say invented – an individual mandate, though he has since renounced his endorsement of that concept. That plan formed the core of the chief Republican alternative to the Clinton health plan in 1993, which had key features in common with the ACA.

Cold water on the superwaiver

Christopher Condeluci, currently a healthcare consultant, was a tax counsel to Republicans on the Senate Finance Committee in the period when the ACA was drafted. He has acknowledged that no one who was involved in the ACA’s creation understood the subsidies to be limited in the way that the King plaintiffs claim they are – that is, to be authorized only in exchanges that were “established by a state” and not in the federal exchange. He has also said that there was agreement between Republicans and Democrats on the Finance Committee on about 80 percent of the substance of what became the ACA.

Condeluci acknowledged that some Republican proposals to amend or replace the ACA are “1332-like” – that is, they codify the kind of changes that states could propose under the ACA’s innovation waivers. But he insisted that “Republicans aren’t looking to 1332” as a framework for implementing those reforms. They would seek to offer states a Republican alternative that would serve as a sort of prepackaged (and pre-approved) 1332 waiver. The package would include repeal of the individual and employer mandates and of HHS guidelines for essential health benefits that must be covered by all health plans. It would also include some of the ACA’s most popular coverage rules: access for people with pre-existing conditions, a ban on annual or lifetime coverage caps, and mandatory employer coverage for children up to age 26.

In a followup interview, I asked Condeluci whether in a post-King negotiation Republicans might not settle for lighter HHS oversight and loosened standards for, say, comprehensive coverage. “No,” he said, “I do not think Republicans would have an appetite for incorporating into any Republican alternative some sort of oversight or permission granted by the federal government. A GOP alternative would not involve HHS’s blessing in any way, shape or form. ” That’s the core of his difference with Butler.

The other members of the panel (excluding Butler) all clearly felt that that Condeluci was describing a political reality. Panel moderator Joel Ario of Manatt Health Consulting, formerly Director of the Office of Health Insurance Exchanges at HHS, forecast that Republicans would never coalesce around any alternative that President Obama would sign, and that states would be left on their own to cope with the fallout from a ruling for the plaintiffs in King.

Plans are plans – but what might happen in a high-pressure negotiation?

Republicans in Congress don’t want to be tagged with saving the ACA. But they also don’t want to be blamed for uninsuring millions. And should the Supreme Court rule that the federal exchange is not authorized by the law as currently written to provide the subsidies that are the ACA’s life blood, no one knows which side the public will come to blame as Republicans propose their “fixes” and Democrats reject them.

If the weight of public opinion does begin to fall on the GOP, the kind of compromise Butler envisions could come into play (as Michael Leavitt, George W. Bush’s HHS Secretary, suggested to me). But Republicans would need a blood price, one with strong symbolic value, in exchange for letting the ACA continue to function more or less as is. A general “superwaiver” enabling state governments to redesign the ACA on multiple fronts might be too blurry – and, if Condeluci is right, too submissive to the feds. Perhaps focusing on the ACA’s most hated feature would be more satisfying – and feasible.

Proposal to satisfy GOP and Dems?

Here, then, is a modest proposal for a high-pressure post-King negotiation: make the employer and individual mandates optional for states. Republicans can concentrate their messaging on the hated individual mandate, the requirement that individuals obtain affordable insurance or pay a tax penalty.

How could a state repeal and replace the individual mandate without destroying its insurance market? The mandate is one half of a fundamental bargain with insurers: compensate them for agreeing not to vary the price of insurance according to a person’s medical history by pulling healthy people into the “risk pool.” So-called “guaranteed issue” — offering the same price to every customer of the same age — is rendered viable by the mandate.

In fact, though, there are alternative methods of pulling the uninsured into a large enough risk pool to make guaranteed issue viable. A variant of one was in the “repeal and replace” legislative outlined floated in early 2014 by Senators Coburn, Burr and Hatch. It’s a triple stool:

Making the mandate optional would force red state governors and legislators to put up or shut up – accept the mandate as an essential tool in making insurance affordable to all, or find something that works better. That’s arguably a downside from a Republican standpoint – who wants to work to fix this horrendous law? On the other hand, many Republican governors and legislators by now have put their stamp on the ACA’s Medicaid expansion, creating “private options” that impose various conditions and small copays on beneficiaries.

If a deal to make the mandate optional were on the table, Democrats could console themselves by reflecting that the option is already present in the ACA – new legislation would simply highlight it and smooth the path. Republicans could console themselves in the thought that they’d provided their state government colleagues with an off-ramp to the ACA feature most offensive to them – the focal point of their Constitutional challenge that failed in the Supreme Court. That’s not nothing.