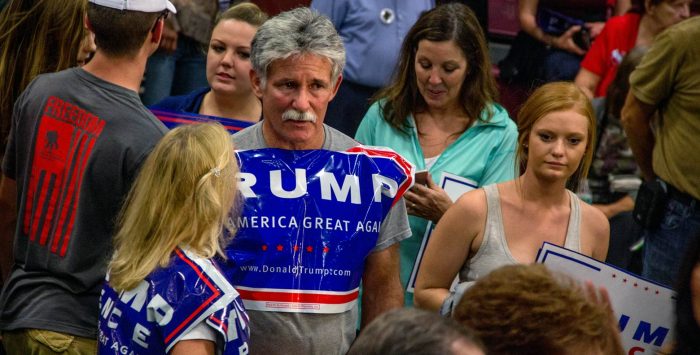 Sunday’s Washington Post included a front-page story, “Fear, hope, and deportations,” which merits a careful and sympathetic read from liberals, conservatives, and journalists trying to understand what is happening in the country today.

Reporters Mary Jordan and Kevin Sullivan profile a 59-year-old Texas woman named Tamara Estes. She was born into some affluence, raised in “a grand home with a built-in pool.” But her mom died when she was four. Her dad died when she was 19. She married young, and by age 26 she was divorced with two kids. She has since traveled a sad path of downward economic mobility, never going to college, taking a succession of dead-end jobs. She now works as a school bus driver in Valley View, Texas, with an annual income of $24,000. “With four days left to payday, she has $118.72 in her checking account.”

Most of the youngsters on Estes’ school bus speak Spanish. Many of their parents came to the United States as undocumented immigrants, and many remain undocumented. These children are typically U.S. citizens because they were born here. Following the lexicon of her favorite right-wing talk radio, Estes refers to these children as “anchor babies.” They are a large proportion of Texas public school students. Their families create large benefits and large burdens for local governments and the local economy.

She seethes about her undocumented neighbors … would have them deported

Estes’ next-door neighbors Nicolas Nevarez and Azucena Reyes fit this profile. They have been working in the United States for twenty years without legal status, working at low pay cleaning homes, doing construction jobs. They are among the millions of undocumented Americans who now fear deportation.

Their yearly income is about $30,000, but were able to buy their $40,000 home for cash at a foreclosure sale. Their four children are U.S. citizens. Their 15-year-old, Rainier is a lineman on high school football team. He is a strong student, who wants to attend Texas A&M University to study mechanical engineering. He may join the army to pay for college. Although Rainier’s parents are uninsured, he is eligible for Medicaid, which paid for a recent knee surgery.

Ms. Estes seethes with resentment against undocumented immigrants. She’s lonely, bitter, and disappointed. It’s hard to read some of her ungenerous views. It’s easy to read her comments as blaming immigrants for her own missteps and life problems. If she had her way, she would deport her own neighbors, who have done nothing to hurt her, who are merely trying to live a better life, and who contribute in so many ways to American society. I have taught many undocumented and DACA students over the years. I think the world of them.

Although Ms. Estes espouses cruel policies, we should take seriously her human reality. She believes that immigrants’ competitive presence makes it harder for her to find a good-paying job. To add insult to injury, her lack of Spanish facility poses a new concrete barrier, given her area’s demographic realities. We can debate economic studies on the costs and benefits of immigrant labor. I wouldn’t be surprised if the local immigrant presence, combined with weak unionization, has something to do with a school driver’s $24,000 pay. Whatever the economic analysis, Estes is in a tough life situation.

OK, but why am I reading this in healthinsurance.org?

Fair point. By this point in my essay, you may wonder what all this has to do with health insurance and the other things we write about at this site. Well, Ms. Estes is uninsured.

Here’s how Mary Jordan and Kevin Sullivan briefly describe Estes’ situation: She earns a bit too much to qualify for most government assistance but too little to buy health insurance, with its high monthly premiums and impossible deductibles.

When she broke her arm last year, she wrapped it in a $15 drugstore brace and popped ibuprofen for a month.

This part of the story should give liberals, conservatives, and journalists some pause. Dean Baker rightly notes that this passage is misleading. Their long, 3,000 word story could have added another 150 to explain that Ms. Estes is eligible for about $578 per month in the ACA insurance subsidies. That’s twice the maximum monthly cash benefit under Texas’s Temporary Assistance for Needy Families (TANF) program for a family of three. That’s pretty generous..

I clicked on HealthCare.gov and I explored what’s available in Ms. Estes’ zip code. She is apparently eligible for a Silver plan with a monthly premium, after her ACA premium subsidy, of $69.44. Jordan and Sullivan should have pointed this out in their story. (She might even have been eligible for free coverage had Texas adopted the ACA’s Medicaid expansion, not because she would have gotten Medicaid herself, but because the expansion improves the state’s insurance risk pool and makes everyone’s insurance less expensive.)

Her premiums, deductibles and co-insurance will be higher under GOP plan, says the CBO

In almost every way, Republicans’ proposed “repeal and replace” legislation would make her life worse. As I understand it, the House Republican bill, the American Health Care Act (AHCA), would cut her monthly premium tax credit by $226. It would also allow substantial increases in her premium due to the 5:1 age band. The AHCA raises her premiums even more by chasing healthy low-income near-retirees out of the insurance pool.

As I noted in my last column, the nonpartisan Congressional Budget Office analyzed the likely impact of the AHCA on average health insurance premiums in the individual market. CBO concluded that annual net premiums for a 64-year-old earning $26,500 would rise from $1,700 to $14,600. That report could have Tamara Estes’ name and picture right on it. Republicans’ other proposed cuts to the social safety net won’t help Estes, either. Given Texas’s miserly state government, its services for low-income people are heavily fueled by discretionary federal grants such as Community Development Block Grants Republicans propose to cut.

You might wonder why Estes is such an enthusiastic supporter of a faux-economic-populist President who would destroy her prospects to get decent health insurance. Estes seems so bent on hammering undocumented immigrants that she supports unworthy policies that hammer people like herself. “What’s the matter with rural Texas,” the liberal might say.

There’s much to this. Conservative talk radio hosts and Republican politicians are big parts of the problem. Both have regularly lied to people like Tamara Estes about the Affordable Care Act and about Republican plans to repeal it. Republican talking points exploit public resentment of high premiums and out-of-pocket costs when Republican proposals would make both of these challenges far worse for the average person.

That lie stands exposed, as Republicans and their voters confront the real-world implications of repealing the ACA. Republican politicians across the country are facing angry voters who rely on Medicaid, the ACA exchange subsidies, or crucial protections for voters with preexisting conditions.

But that’s only part of the story. Liberal ACA supporters like me must ponder Estes’ story, too. The AHCA would make Ms. Estes’ life more insecure. We might consider why she has so little reason to know that, or to feel particularly grateful for what the ACA has to offer. Part of the problem is that she doesn’t know. In fairness, the ACA’s convoluted structure makes the financial issues opaque. More important, the ACA is not generous enough to many people in her situation. It’s not all that surprising that she wants to bail on it.

Here’s the basic problem: Her Silver plan, despite its $578 subsidy, has a $2,250 deductible and leaves her vulnerable for total out-of-pocket payments exceeding $5,000. Given that she has $118 with four days to the next paycheck, she’s obviously in a world of trouble if she needs real care.

Her situation also reveals the ridiculously convoluted nature of cost-sharing subsidies. She’s entitled to some help with out-of-pocket costs on top of her premium subsidy. But she earns almost exactly too much to get decent cost sharing. Because her income just exceeds 200 percent of the federal poverty line, she is now eligible for a CSR73 plan – an acronym for a policy that provides 73% actuarial value – for the expected healthcare expenditures. If her income were only $1,000 less, she would be eligible for a CSR87 plan, which would have the same premium but a deductible of only $500 and only a $2,350 cap on her total out-of-pocket medical costs to protect her against large medical bills. This is ungenerous social policy. As conservatives right note, this policy imposes a heck of a marginal tax rate on her work effort, too.

I’m really proud of the ACA. But it doesn’t do enough for working-class people who struggle to afford healthcare and health coverage. I mainly blame conservative Democrats and fiscal hawks for this failure. They were the Senate critical votes, and they just weren’t willing to expend sufficient federal dollars to provide generous coverage. Those further left, including myself, bear some blame, too. We were so focused on the public option, which was always a political longshot. We and President Obama were not sufficiently focused on the simple mechanics of getting more generous subsidies. I’m convinced this is one big reason Hillary Clinton isn’t President today.

Tamara Estes is not the world’s most appealing or most perfect person. She should take fewer puffs on bigoted and deceptive right-wing radio. She shouldn’t blame immigrants for her life’s disappointments and problems. Harming immigrants will do nothing to help her.

As a friend noted on email, it wouldn’t hurt her to learn a little Spanish, too. If nothing else, she might learn a few kinds words for the kids she transports. She might be less lonely and isolated if she got to know her immigrant neighbors, who seem like lovely people.

But I can’t hate her. In violence prevention, we like to say: “Hurt people hurt people.” That’s true in politics, too. Tamara Estes is hurting, and she’s lashing out at her own neighbors. That’s ugly to see.

But she still needs help. She didn’t get enough from the ACA. She’ll get a lot less from President Trump, but we supporters of expanded coverage have given her too little reason to really know that. Whatever happens in the current knife fight over health reform. We face a daunting moral and political challenge to fix that, to go in precisely the opposite direction Republicans are determined to go.