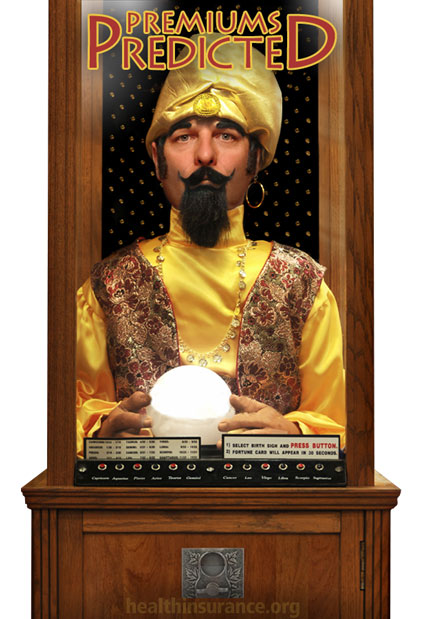 Today, many Americans are asking, “Will my premiums go up in 2014?” There is no simple answer, as it will depend on various factors, including your income, your age, your gender, whether a past illness or injury has been labeled a pre-existing condition, who you work for, and what type of insurance you have now.

If you work for a large company:

The ACA will have a “negligible” effect on your premiums says the Congressional Budget Office (CBO).

This doesn’t mean that your costs won’t climb in 2014. As long as medical product-makers and providers continue to raise prices, premiums will edge up each year.

But in 2012 average premiums for employer-based insurance rose by just 3 percent for single coverage and 4 percent for families, a “modest increase” when compared to 8 percent to 12 percent jumps in past years. And on average, employee co-pays and deductibles remained flat.

Granted, a 3 percent to 4 percent increase still outpaces growth in workers’ wages (1.7 percent percent) and general inflation (2.3 percent) percent). But as reform reins in spending, annual increases for large groups could fall to 2 percent – or less.

If you work for a small company with more than 50 employees:

Your boss will be more likely to offer affordable benefits, in part because, if he doesn’t, he will have to pay a penalty.

But starting in 2014, businesses with fewer than 100 employees will begin buying insurance in exchanges where they will become part of a large group, and eligible for lower rates.

Finally, some companies with fewer than 25 employees will receive subsidies that cover 50 percent of what they lay out for insurance.

If you work for a small firm where many employees are older, female, or suffer from a pre-existing condition:

Your premiums may well fall. Today, most states let insurers charge small firms more if many of their workers are older or are women.  They also can jack up premiums if just a few workers fall ill or are injured.

If you are self-employed, unemployed, or work for a company that doesn’t offer health benefits:

The ACA will let you buy your own insurance in the exchanges –marketplaces where you will qualify for a government subsidy if you earn less than $44,680 ($92,200 for a family of four.) This calculator lets you estimate the size of your subsidy.

In the exchanges, insurers will have to cover essential benefits. If you now have a bare-bones policy, premiums will be higher, but for most, CBO says, subsidies will make up the difference.

If you buy your own insurance and earn too much to qualify for a subsidy:

You’re still likely to find that insurance is less expensive in the exchanges because there you become part of a large group, eligible for the lower rates that large groups enjoy.

If you buy your own coverage and suffer from a preexisting condition:

If you live in one of the other 39 states, your premiums should fall.

If you are a woman and buy your own insurance:

Today, in most states, insurers can charge you far more than they would charge a man for the same policy – even though your insurance doesn’t include maternity benefits.  The exceptions are: California, Colorado, Maine, Massachusetts, Minnesota, Montana, New Hampshire, New Jersey, New York, North Dakota, Oregon, Vermont, and Washington. Elsewhere, in 2014, you’re likely to pay less.

If you are in your 50s or 60s and buy your own insurance:

You may be shelling out four to six times what a 30-something would pay for the same policy. But under the ACA, insurers can only charge you three times as much. Today six states prohibit (New York) or limit age-rating to 3:1 or less. (Maine, Massachusetts, Minnesota, New Mexico, Vermont).  In all other states, your premiums should fall.

If you are in your 20s or 30s and buy your own insurance:

You probably have heard that your costs will spiral because you will be helping to support aging boomers and people who suffer from “pre-existing conditions.”

But in the exchanges, insurers will charge a 50-something three times as much as they charge you. Moreover, rich subsidies will attract an influx of currently uninsured, young, healthy customers, spreading the cost of caring for the elderly over a much larger group.

As noted above, today six states prohibit age rating (New York), or limit it to a ratio of 3:1 or less. In these states (Maine, Massachusetts, Minnesota, New Mexico, Vermont), your rates won’t climb because you’re in an exchange with 50-somethings.

As for covering the chronically ill, eleven states already prohibit hiking premiums because of pre-existing conditions. If you live in Colorado, Connecticut, Maryland, Maine, Massachusetts, New Jersey, New York, Oregon, Vermont, or Washington, you won’t wind up paying more for this reason.