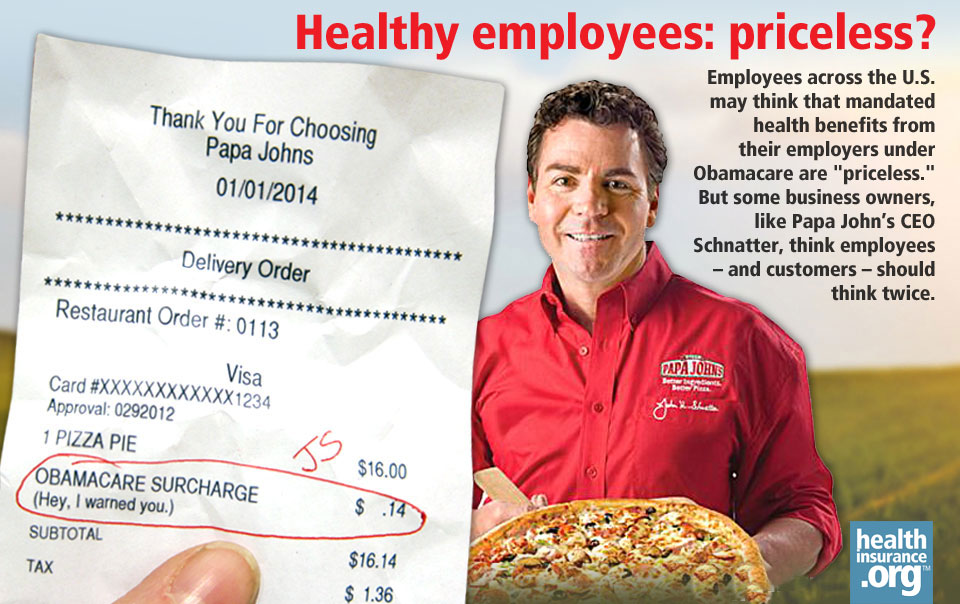 Conservatives argue that “Obamacare” will “keep unemployment high” because, under the Affordable Care Act (ACA), companies with at least 50 employees are expected to offer “full-time employees” (working over 30 hours weekly) affordable health insurance.

If employers choose not to offer benefits – and more than 30 of their employees qualify for government subsidies designed to help them purchase their own coverage – the employer will wind up paying a penalty of $3,000 for each worker who receives a subsidy. (The Kaiser Family Foundation offers an excellent graphic explaining the rule.)

To duck the fine, chain restaurants such as The Olive Garden, Applebee’s and Papa John’s Pizza, recently have announced that they plan to cut many of their full-time workers to less than 30 hours a week.

(Papa John’s founder and CEO John Schnatter has attempted to “walk back” his comments on Huffington Post. First, he claimed he was misquoted: “we have no plans to cut team hours as a result of the Affordable Care Act.” Then, he admitted that when a reporter asked: “wouldn’t some business owners just cut people down like 34 hours a week so they wouldn’t have to pay for health insurance?” he answered: “It’s common sense.”

But,  Schnatter says that when the reporter asked about “business owners,” he thought she was asking how “Papa John’s franchisees would respond to Obamacare, not what Papa John’s would do … Since our franchisees own the restaurants they operate, who they hire, how many hours they give each employee and what they pay each employee is up to them, not me or Papa John’s.”

Slick, but not persuasive. In fact, the CEO of a franchise has considerably more influence than Schnatter suggests: when John Metz, a Denny’s franchisee who owns some 30 locations, suggested that Obamacare would force him to cut hours,  Denny’s “CEO John Miller privately reached out to Metz to express his ‘disappointment'” with the Florida franchisee’s controversial statements about Obamacare. Metz quickly recanted.

Schnatter also has declared that thanks to Obamacare “he’s going to have to raise the price of his pizzas by 10 to 14 cents,” reports Joe Paduda on Managed Care Matters”

Let’s think about that,” Paduda adds. “Fourteen cents a pizza gets all of his employees excellent health coverage …”

But here’s the thing: when you crunch the numbers, it turns out that the offering health benefits to full-time employees really only adds 3.4 to 4.6 cents extra to an average-size pie.

Forbes‘ Caleb Malby eyeballed Schnatter’s math and concluded that “the costs his company will incur due to Obamacare are not equal to the price increases he mentions.” Indeed, Malby says, “the regulations” would “add just .4% to .7% (yes a fraction of a percent) to his operating expenses.”

Restaurant chains such as Papa John’s can afford to insure their workers (or pay the penalty), in part because many of their employees are young. According to Congressional Budget Office estimates, in 2014 insurance for a single 30-year-old will cost roughly $3,440; his employer’s share would equal less than the penalty.

Meanwhile, research shows that when employees are insured, absenteeism falls and productivity rises. In other words, employers are being asked to pay a penalty to help fund the subsidies that will make their workers more valuable.

Why, then, is Papa John talking about slashing employees’ hours? Schnatter, who was a Mitt Romney fundraiser and supporter, made his announcement just after the election. Forbes‘ Malby suggests that threats about downsizing have less to do with profit margins than with politics.

But what about a typical “mom-and-pop business”?

Conservatives claim that the cost of Obamacare will cripple small businesses, “the engine of job growth.” What they rarely mention is that: