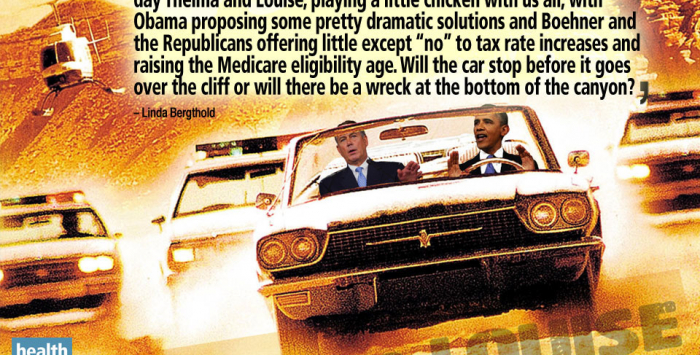 It’s hard not to think about the movie “Thelma and Louise” with all the dire predictions about the coming”fiscal cliff.” Those two crazy broads drove off the cliff and did not live happily ever after. House Speaker Boehner and President Obama may be our modern day Thelma and Louise, playing a little chicken with us all, with Obama proposing some pretty dramatic solutions and Boehner and the Republicans offering little except “no” to tax rate increases and raising the Medicare eligibility age.

Where are we likely to end up? Will the car stop before it goes over the cliff or will there be a wreck at the bottom of the canyon?

While all the drama is playing out publicly, serious policymakers have been working hard behind the scenes to come up with a package that can get enough votes to pass the House of Representatives and the Senate. Of particular interest to many of us are potential cuts in health care. Realistically, what are the proposals being discussed in these conversations? What should you be worried about if you are hoping to get insurance through your state exchange in 2014 or if you rely on Medicare or Medicaid for your coverage?

Here are a few of the more serious proposals for “entitlement” cuts (e.g. Medicare and Medicaid), as well as some indication of the likelihood that they could be implemented.

Right now when you turn 65, you are automatically enrolled in Part A of Medicare and you can choose to enroll in Medicare Parts B and D. One proposal to save the government money is to raise the age of eligibility over time to 67. The Congressional Budget Office has estimated that raising the Medicare age to 67 would save $124.8 billion between 2014 and 2021.

Republican advocates of this approach argue that people are living longer, yet the Medicare eligibility age has never changed. But while $124.8 billion is a significant amount, the savings that might accrue to Medicare would be shifted to other payers and beneficiaries. Roughly half of potential beneficiaries would work longer, thus requiring their employers to continue covering them; about 5% would remain uninsured. Of the remainder, one-third would seek coverage and potentially subsidies through the state exchanges, which would raise the premium costs for everyone.

Raising the age would also stir the ire of millions of retired and soon to be retired Americans. It would be a very unpopular policy to explain and implement. For that reason, and the cost shift, I doubt this source of savings will be in the final package.

2. Raise Medicare premiums and payments for the wealthy 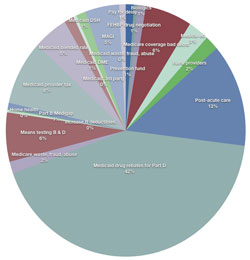 This chart from ThinkProgress reveals the $320 billion in savings in President Obama’s new deficit plan. (Click on the image for a full-size graphic.)

The chart at the right illustrates the ways that Obama would produce approximately $300 to $320 billion in savings from Medicare and Medicaid. As you can see from the Chart, most of the savings would come from restructuring payments to providers, cutting payments to various providers, and negotiating better prescription drug deals for Medicaid.

But there are several ways in which “wealthier” seniors (e.g. individuals who have a Modified Adjusted Gross Income – MAGI – of more than $85,000/year and couples with a MAGI of over $170,000) would pay more for their Medicare. These so-called “wealthy” seniors would pay 15% more for physician visits and drug c/glossary/modified-adjusted-gross-income-magi/overage. They would also pay more for their Medigap premiums and all new beneficiaries would pay a $25 “deductible” for doctor visits.

Medicare is already “means-tested” – that is, wealthier beneficiaries pay more for Parts B and D of Medicare. You could argue that if you, as a couple, make $170,000 a year, you can afford to pay a little more for Medicare. But let’s not pretend that those who have that level of income are not already contributing more. They are.

I predict that there will be increases in Medicare cost sharing for the wealthy in the final package.

3. Change in payment approaches for Medicaid

Medicaid is the federal-state program that currently covers several categories of beneficiaries: single women with children, poor elderly, and the disabled. In the chart above, a substantial portion of the “savings” come from cuts or changes to the Medicaid program – 42% by negotiating drug rebates and 11% from changes in Medicaid provider rates.

Still, in comparison to Rep. Ryan’s proposal for Medicaid – $1.4 TRILLION in cuts – the Administration’s proposal is modest. Because Obama was re-elected, Medicaid will not be a “block-grant” program and with the implementation of the Affordable Care Act, states will qualify for substantial federal support for their Medicaid programs.

Since the Medicaid program provides health care to the most vulnerable, it seems unlikely that the final deal will go further than the proposals in the current Administration budget.

There are other proposals being discussed, but the latest insider projection – is that a final deal will include no less than $400 billion in entitlement savings, mostly from Medicare. There may be some attempts to cut the Affordable Care Act’s Prevention and Public Health Fund and attempts to put Social Security on the table, but Democrats will likely oppose those efforts.

What does this all mean for you? Unless you are one of the “wealthy” Medicare seniors, you may not notice any significant change at all. Hopefully, if you depend on Medicaid and live in a state that accepts the federal contribution to that program, you may have even more access to health care coverage. And if you are a provider of health care services, the only thing you can count on – is cuts.

Dr. Linda Bergthold has been a health care consultant and researcher for over 25 years. She worked on the Clinton Health Reform plan and was the head of the Obama health care blog team in 2008. Her previous articles for healthinsurance.org include Will the real Mitt Romney stand up? or SHOW up? and Democrats fall in love with Obamacare – just in time.