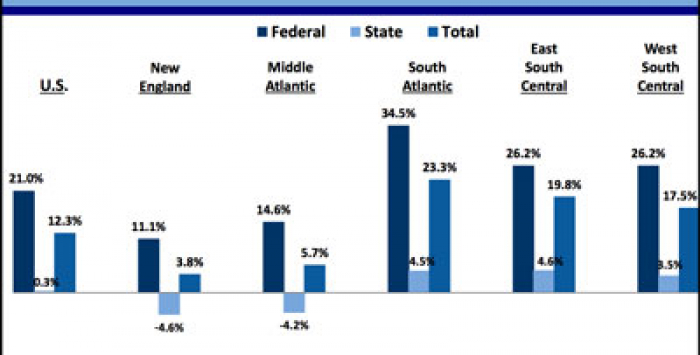 I spent November 30 at a terrific small-group University of Chicago conference on states’ implementation of the Medicaid expansion in health reform. The conference was sponsored by the Journal of Health Politics, Policy, and Law. (My colleague Colleen Grogan organized the conference. She edits JHPPL.) A number of state Medicaid administrators here, along with a small group of academic researchers.

The Urban Institute’s John Holahan, Matthew Buettgens, Caitlin Carroll, and Stan Dorn presented a series of analyses of the fiscal impact of ACA’s Medicaid expansion on the states. Their numbers matched well those provided by the Congressional Budget Office.

The disconnect between reality and rhetoric on Medicaid expansion

What’s remarkable about the Urban figures is how misplaced the rhetoric of Medicaid budget crisis really is. Put slightly differently, these numbers show how disconnected this rhetoric really is from the numerical realities of the Affordable Care Act. 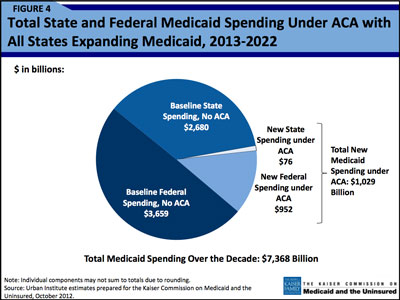 The $76 billion in new Medicaid spending: small compared to new federal spending – and baseline state spending without the ACA. (Click on image for full report.)

The fiscal burdens are not evenly distributed across the states. (See Figure 7 at right and here.) 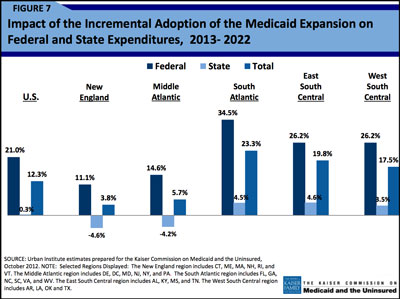 Four percent is a small number, especially when one is covering millions of people who would otherwise go uninsured. Yet it’s a heavy political lift to enact a 4 percent increase to serve a politically marginalized population in many conservative states.

Without minimizing this reality, it’s especially striking that these costs comprise a tiny fraction of states’ overall spending. 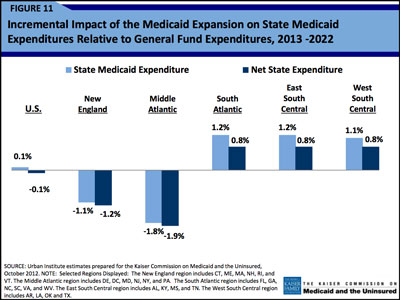 On average, the ACA’s Medicaid expansion affects states’ general fund expenditures by about 0.1 percent. (Click on this image for the full report.)

On average across the states, ACA’s Medicaid expansion alters general fund expenditures by something in the neighborhood of 0.1 percent. (See Figure 11 at right and here.) In southern states, the costs rise to about 1 percent of state budgets. So health reform – as currently structured – is a smaller challenge than general health care inflation, unfunded public employee pension obligations, and other economic and fiscal challenges facing states in a very tough fiscal environment.

I started writing this column expecting to end about here, with the predictable conclusion: Governors (especially Republicans) should stop belly-aching about what are actually quite generous provisions in health reform.

I mostly stand by this position. Yet listening to state policy experts around the room, I started to temper my perspective, too. States actually do have legitimate concerns that should at least be understood, if not always accommodated. These concerns arise from the federalist structure of Medicaid policy. States have real policy uncertainties. Their biggest overall worry is that Democrats and Republicans in Washington will shift costs and risks onto states, or that the federal government will constrain states in new or difficult ways that states are ill-equipped to handle.

The Affordable Care Act has in some ways contributed to these uncertainties. It imposed “maintenance-of-effort requirements” that distress governors in both parties. States worry that they are losing the ability to respond to a budget crisis by cutting reimbursement rates, by imposing cost-sharing on selected services and populations, by cutting optional services, or by cutting services to optional populations. I myself would be deeply suspicious of each of these approaches. One can nonetheless understand why governors who face balanced budget requirements and hard fiscal constraints would be hesitant to irreversibly commit to a new social contract embodied in the Affordable Care Act.

I see two immediate implications arise from this.

First, the most important and interesting form of bipartisanship in America involves the Obama administration and Republican office-holders at the state level. This form of bipartisanship is much more likely than (say) real cooperation between President Obama and House Republicans. In Washington, the two sides have starkly opposing interests. Republican legislators have little stake in health reform’s practical success. Many are happy to burn the house down to score ideological points.

President, governors need each other

When it comes to Republican governors, though, the story is different. These men and women are responsible to finance care for millions of people. They operate billion-dollar Medicaid agencies. The governors and the president need the other. Each side has a (possibly perverse) stake in the other’s success. Each would also be wise to make some concession, if for no other reason than to provide their counterpart with a dignified path to compromise during the second Obama term.

This won’t be easy. As a liberal health policy wonk myself, I’m still angry with several Republican governors for their bitter opposition to Obamacare, for their pursuit of (in my view groundless and destructive) legal case against ACA, and (in many cases) governors’ tenuous commitment to the well-being of their own disadvantaged citizens. Many red-state governors can’t compromise with President Obama under any circumstances, given powerful Tea Party contingents within their legislatures and their political coalitions.

Other governors, however, are reachable. They have strong reasons to find some accommodation, particularly as the local consequences of rejecting Medicaid expansion become real. Hospitals, nursing homes, and other interest-groups are pressing states to embrace the Medicaid expansion. State Medicaid agencies often show greater willingness to implement the new law than their partisan overseers.

Governors WILL embrace Medicaid expansion. But when?

Governors will eventually embrace the Medicaid expansion. The economics are just too compelling. But it would be nice not to wait five or ten years for millions of people to receive needed coverage. And states and the federal government must cooperate to solve a host of difficult implementation problems and glitches already-arising under ACA. One vehicle of compromise and accommodation might be to work through both Democrats and Republicans in the National Governors’ Association.

States may also require some credible pre-commitment that they can back out of some or all of the Medicaid expansion if Congress modifies the favorable terms under current law. Such assurances provide states with a greater sense of safety. They may also bring the beneficial side-effect of deterring future congresses from nibbling away at important supports for states embodied in health reform.

Second, state governments must be protected in the upcoming negotiations over the fiscal cliff. Medicaid poses quite manageable burdens on the federal budget. These burdens are much less manageable from the states’ perspective.

These are not liberal or conservative issues. So they may not receive the attention they deserve. They should. Governors are certainly watching to see how federal policymakers will respond under stress, when real money is on the table, when two branches of the federal government face clear incentives to offload burdens and risks onto the states.

The Supreme Court and the 2012 election resolved one fundamental issue. As Speaker Boehner put things, health reform is the law of the land. These victories were important, but they were the end of the beginning phase of health reform. Now states and the federal government must actually make this thing work. Neither can do this alone.