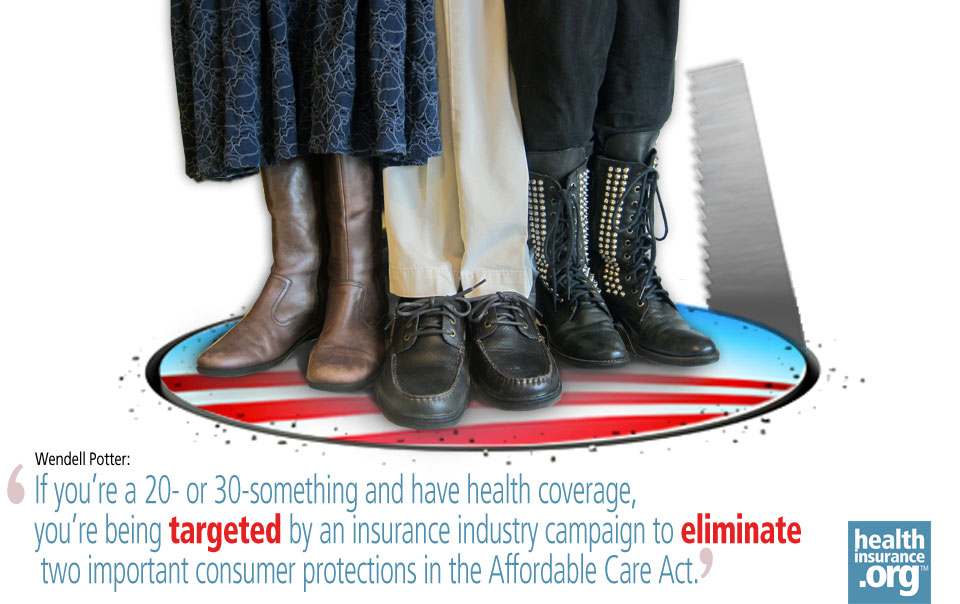 If you’re a twenty- or thirty-something and have health coverage, you are being targeted by the insurance industry in its new campaign to eliminate two important consumer protections in the Affordable Care Act, a.k.a. ObamaCare.

Take it from me, a guy who used to help plan and execute such campaigns over my 20-year career as an industry executive: Insurers want you to call or write your Member of Congress and demand changes to ObamaCare, changes they say will keep your premiums from skyrocketing.

Several health insurance companies sell policies that many consumer advocates call “junk insurance” because of their extremely limited benefits. These policies, most of which also have annual or lifetime caps and very high deductibles, are marketed primarily to young adults. If these young customers become seriously ill or injured, they end up being on the hook for thousands of dollars in uncovered expenses.

Some such plans don’t even cover hospitalization, and the ones that do often pay no more than $10,000 a year for hospital care. That won’t come close to covering the cost of an average stay in an American hospital, which reached $33,078 in 2010, according to researchers at George Washington University.

Limited-benefit policies are highly profitable because even though their premiums are comparatively low, insurers never pay out much in claims. Thanks to the ACA, however, insurers will no longer be allowed to sell junk policies because, starting in 2014, all policies must cover a minimum of ten “essential health benefits,” including drug coverage, maternity care, mental health care, and hospitalization, to name a few.

No more price-gouging for your parents

Insurers also increase their profits by segmenting the marketplace into different age groups, called “age bands,” and charging older (and generally less healthy) people considerably more than younger folks. Some insurers charge older adults five times more than what they charge you for the exact same policy. The ACA reforms this practice by limiting what insurers can charge your parents and grandparents to three times as much as they charge you.

Which is still no picnic for them, however, because even with the ACA’s improved age band ratio of 3 to 1, many of your older relatives may decide to forego buying coverage, as many do now, because of the high cost. For example, even some older people in Massachusetts – where the ratio is just 2-1 (thanks to RomneyCare) – find it hard to get affordable coverage.

The Boston Globe reported in 2009 that insurers were charging Bay Staters in their 50s nearly $400 a month for the exact policy they were selling for $200 to people in their 20s. These older Bay Staters would have to pay almost $600 per month if the ratio had been 3-1; they’d pay $1,000 if it was 5-1. While that might sound OK to you now if you’re in your twenties, keep in mind: This bargain is available for a limited time only.

Prepare for the PR deluge

Insurers see these two ACA consumer protections – banning junk insurance and price-gouging of older adults – as threats to their bottom lines. They are not walking away from these profit-making practices without a fight. That’s the world they’ve lived in for many years, and they don’t want it to change. But it will change if they fail to get Congress to weaken the law.

America’s Health Insurance Plans (AHIP), the industry’s big PR and lobbying group, recently launched its “Time for Affordability” campaign to get Congress to repeal the parts of the ACA it doesn’t like. AHIP argues on its website that the “costly benefit requirements and age rating restrictions … will drive up the cost of coverage for many consumers and employers.”

“When this happens,” AHIP contends, “many younger and healthier Americans could decide not to get coverage, which would further drive up costs for everyone else.”

What insurers don’t like is that the ACA takes us back to the way health insurance was sold initially in the United States, or at least a modified version of it. The first medical policies, dating back to the 1920s, were hospitalization plans. These plans were sold on the basis of what is called “community rating”: Everybody in the same community paid the same premium, regardless of age, gender, or health status. These plans eventually adopted the name Blue Cross.

Within a few years, however, big life insurance companies saw an opportunity to make a profit by marketing policies with lower premiums to young and healthy individuals. Before long, even the Blue Cross plans were doing the same thing. They had to, because they were losing their young, healthy policyholders to competitors.

It is true that some people will indeed see their premiums go up because of ObamaCare. That’s because policies that provide adequate coverage cost more than policies that don’t. When insurers are no longer able to charge older folks as much as they can today, they will hike premiums on young people. But most people, young and not so young, will benefit from the law when it’s fully implemented.

Young adults comprise the largest segment of the uninsured, primarily because many of them have low incomes – if they have incomes at all. As many as 8 million uninsured 18- to 34-year-olds will be eligible for Medicaid next year if all the states expand coverage as the law intends. Another 9 million will qualify for subsidies in the new health insurance marketplaces (also called “exchanges”). Options in these marketplaces will be better than what is available today because junk policies will be outlawed. Of the 11.2 million uninsured people between 21 and 29, almost 90 percent will be eligible for subsidies, according to Young Invincibles, a nonprofit advocacy group.

What insurers are really trying to do is preserve the profitable status quo. Their campaign will intensify now that Congress is back in session. Expect to hear more from them, and from their allies, like an organization that calls itself “Young Americans for Affordable HealthCare.” If you haven’t yet, stay tuned. You will.