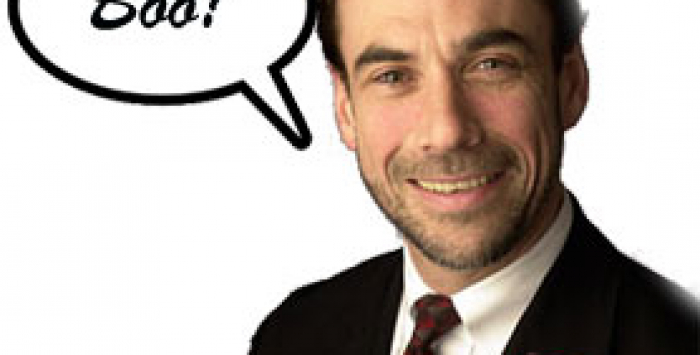 Tomorrow, the House Energy and Commerce Committee’s Subcommittee on Health will hold a hearing entitled: “Unaffordable: Impact of Obamacare on Americans’ Health Insurance.” (Always nice to know that our elected representatives are keeping an open mind.)

Prominent on the list of witnesses: “Douglas Holtz-Eakin.” It is not difficult to predict what Holtz-Eakin will say: healthy Americans should brace for “sticker shock”: the ACA will drive premiums higher.  Conservatives like Holtz-Eakin tend to stay on script. However stale the rhetoric, they firmly believe that if you repeat a sound-bite often enough, people will believe it.

Who is Douglas Holtz-Eakin?

If you recognize the name, it’s probably because Holtz-Eakin has become a familiar figure in the mainstream media, quoted in the New York Times, writing Op-eds for Reuters and Politico.com, and appearing, not only on Fox Business News, but on CNN and the PBS’ Newshour.

Or “Holtz-Eakin” may ring a bell because he served as a member of George W. Bush’s Council of Economic Advisers, and as Director of Bush’s Congressional Budget Office (CBO).

In a remarkably candid 2011 interview, Holtz Eakin recalled his tour in the Bush administration:

“Going into the summer of 2001, things were getting worse. . . When we first went in and talked to the President, Glenn [Hubbard] and Larry Lindsey said, ‘Mr. President . . . We’re probably not going to run a surplus on budget. We’re going to run a deficit.’”

Bush’s reply: “We’re not going to run a deficit. If you come in here with a deficit, you’re both fired. Go fix it.’”

“We ended up running a budget surplus of one billion dollars,” Holtz-Eakin confided, “driven by gimmicks of remarkable proportions.”

These days, Holz-Eakin rarely mentions Bush or McCain. He prefers to be identified as “a former CBO director” as he is on the House subcommittee’s witness list. This makes him sound both neutral and knowledgeable. This also is what makes him dangerous.

What will Holtz-Eakin say tomorrow?

Tomorrow, Holtz-Eakin will, no doubt, base his testimony on a report that he wrote for the American Action Reform in January: Insurance Premiums in 2014: A Survey.  There, he argues that because the ACA “mandates” insurance and benefits, and “guarantees insurance regardless of health status,” it will force “young, healthy individuals” to subsidize “older, sicker” baby-boomers in the individual and small group Exchanges. Citing an AAF survey of insurance companies, Holtz-Eakin predicts that young Americans will see “dramatic increases” in their premiums.

Not long ago, a story on MedPage Today, an online newsource for clinicians, stopped me in my tracks. It reported that according to an AAF survey, in 2014 premiums for young healthy workers in the individual and small group markets, “will increase by an average of 169%. . . . To put a dollar amount on that,” the reporter continued, “the average monthly premium” in the five cities will “jump” from $2,047 to “around $5,124.”

Hold on. If monthly premiums rise to $5,000, coverage would cost $60,000 a year!” I emailed the reporter so that he could make a correction.

Then, I looked at the January 2013 AAF report. There, to my astonishment, I found the same eye-popping numbers, neatly arranged in a table headlined: “Impact on Small Group Market: Younger and Healthier Workers.”

“Somebody didn’t proof-read this table,” I thought. “These must be annual, not monthly premiums.”

Comments on the MedPage post revealed that others agreed:

“JBH” wrote: “Sure hope those are annual premiums, not monthly.” Others chimed in.

But an EDITOR’s NOTE brushed them off: “Sorry, but those are, in fact, monthly figures.”

Then, another reader commented: “Be forewarned this survey comes from a conservative group that has been guilty of lying, previously. . . .See Factcheck.org”. Google soon uncovered a Factcheck piece about AAF headlined: “More Mediscare.”

At this point, I noticed the byline on the AAF report: “Douglas Holtz-Eakin. ” Now, I began to wonder, had the report set out to deliberately mislead readers?

I knew that in the past Holtz-Eakin has been accused of “Spreading Spread Shoddy Research Defending Tax Breaks for Wealthy Heirs.” Recently Paul Krugman called him out for the “grossly false and/or misleading numbers” in an Op-ed about Switzerland’s health care system.

Meanwhile, on MedPage’s comment thread, “JBH” figured out how Holtz-Eakin arrived at “monthly” premiums of $5124. At the very end of the Report’s Appendix a worksheet that asks insurers to estimate premiums is footnoted: “Costs are associated with a group renewing (as opposed to a new applicant.)”

“Monthly” premium figures appear to be for ‘small groups’ of individuals,” JBH explained. “I can’t tell how many compose the small group, but one would assume that it’s quite a few more than one.” The report gives no indication as to how many people are in a group.

MedPage sends the reporter back for a second interview

At about the same time, MedPage’s editor-in chief, Peggy Peck, responded to the email I had sent to her reporter.

After receiving the message the reporter went back to the AAF. “Both the AAF report and the health policy director stood by the numbers as published,” she wrote “So we are not changing those numbers.” (She ignored the fact that the numbers represent premiums for “groups”.)

“But,” she added, when AAF’s health policy director was asked about the numbers he did offer a “modifying statement.”

This prompted the reporter to add a paragraph: “The rates cited in the survey were, in fact, significantly higher than some observers predicted. In a follow-up interview, an AAF spokesperson acknowledged the ‘soft’ nature of the data, saying “Are these [numbers showing what] actually will happen? We don’t know. That’s why it is a survey.”

Thus, the testimony Holtz-Aiken offers tomorrow will be based on secret information from secret sources—sources who have every reasons to exaggerate how much they will have to charge in 2014.