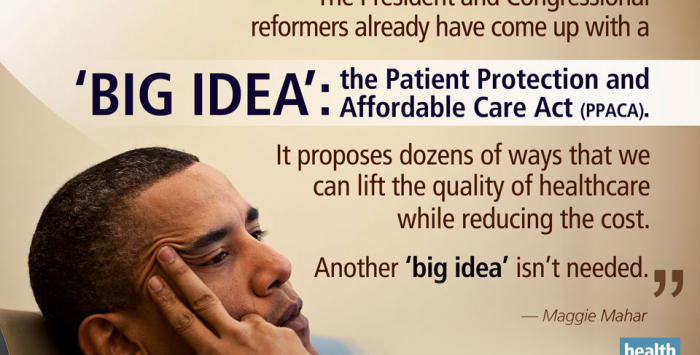 This week, my editors at the Health Insurance Resource Center challenged me to write a letter to President Obama and suggest to him what he should do next to advance health reform. They wanted me, as a health policy expert, to throw some “big ideas” at the President.

Insurers and others in the blogosphere are promoting last-minute ideas for improving reform. And Conservatives still throw out their own ideas for making Obamacare better.

But here’s the thing: The President and Congressional reformers already have come up with a “big idea”: the Patient Protection and Affordable Care Act (P
PACA). It proposes dozens of ways that we can lift the quality of healthcare while reducing the cost. Another “big idea” isn’t needed.

I’ve heard suggestions that NOW, we can move down the road toward single-payer. But there is no road to single-payer, at least not for many, many years – if at all. Reformers like Ezekiel Emanuel have described single-payer as a “conservative, nostalgic” idea.

Moreover, it leaves Americans at the mercy of whoever happens to be running Washington-without any alternatives. Think of what Margaret Thatcher did to the National Health Service in the U.K.

Ultimately I would like to see patient-centered private insurers, such as Kaiser and Geisinger, competing with “a public option.” But today, we don’t have enough votes to make a public option a reality. For now, what is important is that private insurers are regulated – as they will be under the PPACA).

Reform legislation cuts total Medicare spending by $716 billion. (Anyone who says that the PPACA doesn’t rein in spending just hasn’t read the bill.) Fear mongers have suggested that reform achieves these savings by reducing the basket of benefits that seniors receive, and that soon, Medicare will slash payments to physicians, across the board, by some 27 percent.

There is no truth to these rumors. The $716 billion in savings come mainly from reducing over-payments to Medicare Advantage insurers and trimming increases in reimbursement to hospitals by 1 percent a year over ten years. Hospitals accepted this because they know that reform will bring them many newly insured customers who will be able to pay their bills.

Going forward, the biggest way the PPACA will be controlling costs is by changing how we pay for care. Rather than reimbursing fee-for-service, which encourages providers to Do More – reform legislation lets them share in savings if they manage to achieve better outcomes while charging Medicare (and other payors) less.

If they don’t do that, they’ll be penalized. As Atul Gawande points out, under this new system if his hospital “misses its cost-reduction and quality-improvement targets, it will lose tens of millions of dollars.”

These savings will require changes in the medical culture: this is not something the president can dictate.The health reform legislation that we have creates the carrots and sticks to encourage doctors and hospitals to do the right thing. Now we have to wait for them to respond to those incentives and disincentives. The revolution that will reduce waste must come from inside medicine.

The President had the “big ideas.”

Bottom line: The President doesn’t need to come up with new ideas. He just has to stand firm on implementing what we have.

Conservatives are still pledging to be “helpful” on reform. Right. The Republicans in the House are dead set against many of the provisions in the reform bill. But you can’t take out some provisions and leave others. They’re interrelated: remove some, and the whole thing falls apart.

Some conservatives do seem to understand they are not going to re-negotiate the PPACA. As House Majority Leader John Boehner has said, “It’s the law of the land.” But conservatives are going to try to renegotiate so-called “entitlements.” And they’ll use the deficit as their excuse. (It’s worth nothing that conservatives have wanted to cut Social Security, Medicare and Medicaid for 20 years – even when we were running a surplus. They simply don’t believe that Americans are “entitled” to the social safety nets that the citizens of every other developed country enjoy.)

The new “best ideas” for Obama and health reform?

Much of what Obama has to do in these budget negotiations is going to be a matter of tone and attitude. He has to be absolutely firm – not conciliatory. He has the power, and the leverage. On the question of higher taxes for the wealthy, business leaders are behind him.

The New Majority is behind him. All the Republicans can do is posture and threaten that they won’t raise the debt ceiling. But that will never happen – not unless they want to be blamed for sabotaging the nation’s credit rating.

This means “rule making.” As Timothy Jost said in his most recent Health Affairs column there are a great many technical details to be worked out: details tell the states more about the state health insurance exchanges, guidance for employers, rules for insurers. And as Jost says, “Rulemaking takes time.”

This is all pretty dry, technical stuff. But it’s what Obama’s team needs to focus on now – the boring, intricate, lawerly work of dotting the i’s and crossing the t’s so that the law is implemented. I’m sure he’ll do it. He’s a lawyer; he understands this kind of thing.

The PPACA contains so many “big ideas” – now we just need to roll it out, and see which ones work best. This will tell us what further changes we need to make.