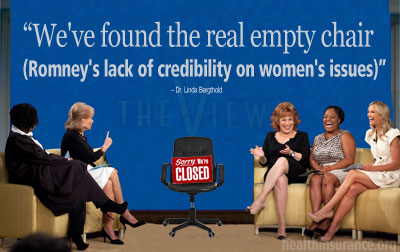 Will the real Mitt Romney stand up? Or take that empty seat?

The Governor was scheduled to appear on ABC’s “The View” yesterday, but cancelled and sent his wife instead. His cancellation shouldn’t be a shock to anyone, since Romney has commented about the five women co-hosts that “four are sharp tongued and (only) one is a conservative.”

Given the contradictory views and statements he has made about women, it is not surprising that he would avoid being interviewed by women who might well challenge him. The real empty chair on The View was Romney’s lack of credibility on issues important to women.

It is absolutely true that Romney’s views on women have evolved during his career. And certainly he has every right to change his mind, although his reasons are usually related to his political career. Early in Romney’s career, as he sought office in Massachusetts, he sounded almost liberal on women’s issues. He spoke at a Planned Parenthood event and his wife donated to Planned Parenthood. He endorsed the legalization of RU-486 the abortion-inducing drug. And most recently, he has said he supports contraception and that he opposes allowing employers to deny contraceptive coverage to their employees.

The trouble with these “changes of mind” is that they occur with dizzying frequency. Not more than a few months ago, he said he supported the “Blunt Amendment,” which explicitly allows employers to deny their women employees coverage of services such as contraception. Where he used to support Planned Parenthood, he now opposes federal funding and has promised he would eliminate it. In the second Presidential debate, he refused to take a stand on fair pay for women and the Lilly Ledbetter Act, the first law that President Obama signed when he came into office. His running mate, Congressman Paul Ryan, is even more extreme on women’s issues, voting 59 times against a woman’s right to choose and opposing abortion even in cases of incest and rape.

On abortion, Romney has taken almost every position possible. When he ran for the Senate from Massachusetts he said he was firmly pro-choice. In the Republican primaries this past year, he said he was firmly pro-life. He has said he would like the Supreme Court to overturn Roe v. Wade and return the decision to the States. (And if Roe v. Wade were overturned tomorrow, it is estimated that at least half the states would outright ban abortion within the first year.) As President, Romney would likely have at least one if not two appointments to the Supreme Court, and only one is needed to overturn Roe.

There was a viral firestorm ignited this week when Romney stated in the second debate that he had asked women’s groups in Massachusetts for “binders full of women” so he could appoint them to his Administration. Why did this push such a button, especially with younger voters? The phrase was awkward and it sounded funny, but more importantly, it was a lie. The women’s groups came to Romney, not the other way around. And while he increased the number of women in top positions during his tenure as Governor (from 30 to 42 percent) by the end, the number of women in top jobs had declined to 25 percent.

So where’s the gender gap?

So here’s the perplexing question. With these anti-women views, why has Romney seemingly wiped out the substantial gender gap between him and Obama in the last few weeks? Why in the world is Romney closing in on Obama with women in major polls? Is the polled population that fickle or ignorant? Do women know what is at stake for them?

I’m not sure anyone can answer that question with any confidence at this point. No significant polling on the issue has been done since the second Presidential debate, where Romney’s “binders-full-of-women” remark and refusal to address pay equity should have played strongly for Obama. Is the disappearance of the gender gap merely an artifact of polling? Can we trust polls that show such a substantial change?

Here are a few ideas. More women are said to be swing voters and when swing voters change their mind, experts say they move the polls substantially. Also, many women do vote on economic issues, and Republicans are generally considered stronger on issues of economic growth. For women who work and are struggling to make ends meet, there isn’t a lot of time to think about politics.

For all the attempts by Democrats to highlight Romney’s many inconsistencies on women’s issues over the past few months, working women may have only tuned in during the debates where Romney didn’t sound at all scary. He pretended to support health insurance without pre-existing conditions, and he became much more moderate than he had been in the primaries. To add to the image of a “nicer gentler Mitt,” his wife, Ann, has been a charming and effective spokesperson. At least on The View, she tried to make the case that Mitt was personally “pro-life” but had governed as “Pro-Choice.” Her message was that he won’t hurt women’s rights as President.

Of course we will not really know how women vote until after the election, when pundits sort out the impact of the various demographic groups. Meanwhile, the chair remains empty and a certain degree of skepticism about the so-called gender gap is in order.