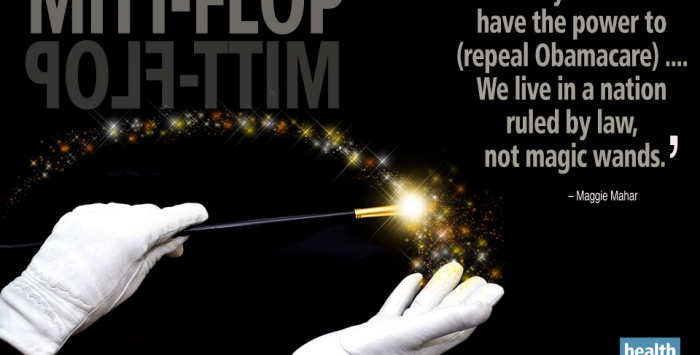 Note to readers:
I welcome questions and comments, and will try my best to reply in a timely manner. I ask only that you do your part to keep our discussion reasoned and polite. – MM

Mitt Romney’s web site makes a bold promise: “On his first day in office, Mitt Romney will issue an executive order that paves the way for the federal government to issue Obamacare waivers to all 50 states. He will then work with Congress to repeal the full legislation as quickly as possible.”

Many of Romney’s supporters assume that this is what will happen if he wins. But in truth, even if Republicans take both the White House and the Senate, Romney wouldn’t have the power to “repeal the full legislation.” Nor could a new president grant waivers that would let states ignore the Affordable Care Act (ACA). We live in a nation ruled by law, not magic wands.

That said, those who support reform should keep a close eye on the Massachusetts Senate race, where Democrat Elizabeth Warren is challenging Republican Senator Scott Brown. The outcome could determine whether Democrats continue to hold 53 seats out of 100. (Political analysts rate Brown and Nevada’s Dean Heller as the two most vulnerable Senate Republican incumbents. If Republicans win the Senate, they won’t be able dismantle reform, but they could do serious damage to the ACA

Romney’s promises – and why you can’t believe them

Begin with the “Obamacare waivers” for the states.

“There are no ‘Obamacare waivers’ that could be issued by executive order,” Washington & Lee health law scholar Timothy Jost explained in a recent phone interview. That’s right: these waivers simply don’t exist. Here, we’re tripping over one of those “Big Lies” that have become a feature of the Romney campaign. (Nazi propaganda chief Joseph Goebbels was the master of the tactic: if you tell a colossal lie, and repeat it often enough, people will believe it, not matter how outrageous. After all, who would make up such a whopper?)

On the HealthAffairs Blog, Jost elaborates: “The Affordable Care Act permits ‘waivers for state innovation’ but they “would only affect certain provisions of the law,” and could not be issued “prior to January 2017. “Even in 2017, “a state seeking a waiver would have to show that it had a plan to provide coverage that is at least as comprehensive and affordable and that covers at least as many people as the ACA (without increasing the deficit), not exactly what Governor Romney has in mind.”

What about Romney’s pledge to work with Congress to repeal the ACA? Under the Senate rules, Jost points out, opponents of health reform would need a three-fifths majority, and “nobody thinks Republicans will get 60 seats.” They now have just 47. “Repeal as such seems off the table.”

If Democrats lose the Senate, Republicans could eliminate subsidies

Nevertheless, if Republicans win control of the Senate, when Congress “reconciles” the budget, Republicans could chuck key provisions in the ACA. Still, Jost explains “budget reconciliation is subject to two important limitations.”

First, it takes time: “Although reconciliation acts have been passed in as little as a month, they usually take much longer, averaging about five months.”

Secondly, under “budget reconciliation,” Congress can only fool with things that affect government revenues and outlays. Medicaid expansion, the premium subsidies that would help middle-class and low-income families purchase insurance, and the mandate that would tax those who choose not to purchase insurance – all would be on the table.

But Jost says, Congress could not change ACA’s new regulations for insurers. They still would be required to cover everyone, and wouldn’t be able to demand higher premiums from those suffering from pre-existing conditions.

Governor Romney has said that he favors requiring that insurers cover everyone only if they have been “continuously insured.” In his scenario, someone who wasn’t able to purchase insurance in the past because she was sick would not be eligible. A 24-year-old who had not been insured since he graduated from college – and is suddenly diagnosed with cancer – would be out of luck. Romney also is opposed to “price regulation.” Insurers could charge a diabetic whatever they choose.

Fortunately, a president does not have the absolute power that Romney seems to assume. Once legislation has become the law of the land, a new president cannot wish it away. Whatever his druthers, unless Republicans take 60 Senate seats, the new insurance regulations would stand.

Consider what that would mean: no subsidies, no mandate that everyone buy insurance – but insurers would be required to cover the sick at normal rates.

As Jost puts it, this would create “quite a mess.” Without subsidies, and without a mandate, few healthy new customers would sign up for insurance. Meanwhile chronically ill Americans who have been priced out of the system in the past would be quick to buy coverage. Insurers would wind up with a pricey pool of chronically ill patients. Premiums would sky-rocket.

How could the mess be resolved? “Only through bi-partisan co-operation,” writes Jost, “but bi-partisanship has not been much in evidence lately.”