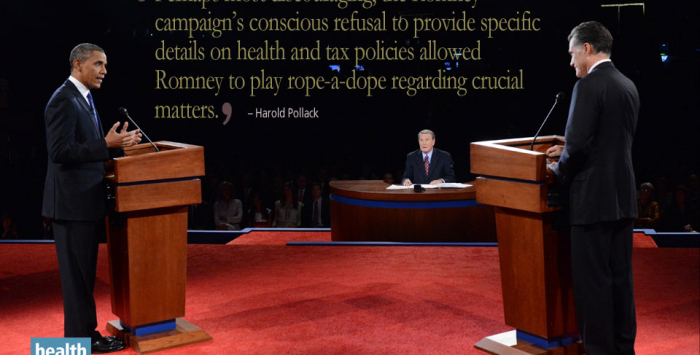 It was discouraging watching the debate tonight. The event was poorly officiated. Jim Lehrer asked superficial questions and looked like a replacement referee in his failure to control the proceedings. President Obama was definitely off his game in defending the most worthy aspects of his term in office.

He missed many opportunities to attack, too – for example in his failure to point out that Romney’s own running mate had supported the same dollar-value Medicare cuts that Romney now harshly criticizes.

Perhaps most discouraging, the Romney campaign’s conscious refusal to provide specific details on health and tax policies allowed Romney to play rope-a-dope regarding crucial matters. He redefined core tax proposals on the fly, and presents a plan whose mathematics can’t add up. Yet without specific details to grab onto, independent observers such as the Tax Policy Center have to guess in filling in the details. It becomes easy to wriggle out of any specific criticism by suggesting that these observers got things wrong. One Romney line exemplified this approach: “Now, you cite a study. There are six other studies that looked at the study you describe and say it’s completely wrong.”

Yet before we get too excited, we should remember a few things. I have a complex theory about political debates: Voters will support the candidate whom they … agree with.

President Obama supports maintaining Medicare as a defined-benefit program rather than a defined-contribution alternative which has the potential to expose seniors to significant costs and risks. The President defends the Affordable Care Act, which would insure 32 million who would otherwise go uninsured. He opposes cutting federal support for Medicaid by about one-third ten years from now. He opposes continuing the Bush tax cuts on the wealthy. He supports socially liberal policies on a variety of fronts from reproductive rights to Don’t Ask Don’t Tell and the Dream Act. These positions are more popular than their Republican alternatives.

There is a second thing, too. This rope-a-dope strategy may prove immediately effective with the general public. Yet most policy analysts realize that the fine print doesn’t add up. This is a risky strategy. Today’s Los Angeles Times casts a skeptical eye on Romney’s claims that his tax policies would not disproportionately benefit the wealthy:

The [nonpartisan Tax Policy Center report] said the loopholes – popular deductions including those for mortgage interest, charitable giving and others – are not plentiful enough at the top of the income scale to cover the estimated $360-billion annual cost of reducing tax rates by 20%.

The gap would need to be filled by closing loopholes for those at lower ends of the income scale, those earning less than $200,000.

In similar fashion, there is no detailed Romney “repeal and replace” proposal to replace health care reform. Ezra Klein notes on MSNBC that the critical details are described on the campaign web site in what amounts to a short blog post.

Romney left off critical details on the issue of preexisting conditions. He certainly did not describe how his plan can realistically cover four million uninsured people with serious preexisting conditions, how much this would cost, or who would pay. The same might be said of Romney’s ambitious but largely-unspecified premium support model I discussed here with Austin Frakt.

Governor Romney is a tough opponent. He reminded people for the first time in a long time that you don’t just fall off a potato truck to win the Republican nomination for the presidency. His veracity in describing his centerpiece proposals is another matter. Let’s see how these matters settle in the coming days, as reporters, policy analysts, and citizens seek to understand what he actually said.