Find a plan.
How much could you save on 2023 coverage?
Compare health insurance plans in Alabama and check your subsidy savings.

Alabama has a federally operated health insurance exchange with three carriers. Outside of the yearly open enrollment period, a qualifying event is required to enroll or make changes to coverage.

One new insurer (Ambetter/Celtic) joined the Alabama exchange for 2023, but one existing insurer (Bright) left the market, keeping the total number of participating insurers at three. In most areas of the state, however, there are only one or two insurers offering plans. Blue Cross Blue Shield of Alabama is the only insurer that offers state-wide coverage; the others have localized coverage areas.

During open enrollment for 2022 coverage, a record-high 219,314 people enrolled in private individual-market plans through the Alabama exchange.

Which health insurance carriers offer coverage in the Alabama marketplace?

As of 2023, three insurers offer coverage through the exchange in Alabama, including one newcomer:

Bright Health had previously offered coverage in the Alabama exchange, but is no longer offering coverage in any state after the end of 2022.

US Health & Live/Ascension Personalized Care had initially filed plans to enter the Alabama market for 2023, but ultimately only expanded into Texas and Tennessee for 2023, and did not move forward with their plan to offer coverage in Alabama.

Which health insurance carriers have offered coverage in the Alabama marketplace in the past?

Historically, Alabama’s health insurance market was considered one of the least competitive in the nation. And although there are three insurers offering coverage in the state’s exchange in 2022, most of the state still only has plans available from Blue Cross Blue Shield of Alabama.

Humana and Blue Cross and Blue Shield of Alabama sold individual health insurance through the federal marketplace in Alabama for 2014. UnitedHealthcare joined the exchange for 2015, offering plans in all 67 Alabama counties. Those three insurers continued to offer plans in Alabama’s exchange in 2016, but Blue Cross Blue Shield still covered the majority of the state’s exchange enrollees.

United and Humana both left the Alabama exchange at the end of 2016. The Alabama Department of Insurance confirmed that both carriers’ exits applied to the entire individual market in the state, so individual market United and Humana plans were not available on or off-exchange in Alabama as of 2017, when Blue Cross Blue Shield of Alabama was the only health insurance carrier offering plans in the Alabama exchange.

Humana had 15,226 individual market members in Alabama in 2016, including both on and off-exchange. UnitedHealthcare’s total exchange enrollment in the state was 20,488 in 2015. All of these enrollees had to switch to BCBSAL in 2017 in order to continue to have coverage.

Although BCBSAL was the state’s lone exchange insurer in 2017, Bright Health joined in the Birmingham area in 2018 and offered coverage there through 2022, but left after the end of 2022. UnitedHealthcare returned to Alabama’s exchange for 2022, bringing the total number of insurers to three. Celtic joined the exchange as of 2023, but Bright Health left. So insurer participation in Alabama’s exchange remained at three as of the 2023 plan year.

When can I enroll in health insurance in Alabama?

The open enrollment period for individual/family coverage runs from November 1 to January 15 in Alabama. Learn more in our comprehensive guide to open enrollment.

Outside of open enrollment, a qualifying event is generally necessary to enroll or make changes to your coverage. But some people can enroll without a specific qualifying event, including Native Americans and subsidy-eligible applicants with household income up to 150% of the poverty level.

How are premiums changing in Alabama's exchange for 2023?

According to the Alabama Department of Insurance, the following average rate changes were approved for 2023:

For perspective, here’s a look at how premiums have changed in Alabama’s exchange in previous years:

How many people have enrolled in health plans through Alabama's exchange?

219,314 people — a record high — enrolled in private individual market plans through the Alabama exchange during open enrollment for 2022 coverage. Here’s a summary of enrollment numbers in Alabama’s exchange over the years:

Can I buy dental insurance through the Alabama health insurance marketplace?

The American Rescue Plan, which was enacted in 2021, temporarily made subsidies larger and more widely available, by eliminating the income cap for subsidy eligibility and reducing the percentage of income that people have to pay for the benchmark plan. The Inflation Reduction Act has extended those provisions through 2025.

The ARP’s subsidy enhancements led to record-high exchange enrollment in 2022, both in Alabama and nationwide.

Insurance executive compensation is a secret in Alabama

Under a law passed in Alabama in 2015 (SB147, which became Act Number 2015-227 when it was signed into law), insurance executive compensation in Alabama is now kept confidential, and is not subject to open records requests, freedom of information requests, or subpoena.

The legislation was sponsored by Slade Blackwell (R, Mountain Brook), and passed with nearly unanimous support. It applies to all insurance companies in the state, but it primarily impacts Blue Cross Blue Shield — by far the dominant carrier in the state. That’s because national carriers, including Humana and UnitedHealthcare (the other two exchange carriers in Alabama) have to report executive compensation to the IRS and the SEC. But Blue Cross Blue Shield of Alabama (a state-based carrier) does not file with the SEC and doesn’t have to disclose executive compensation to the IRS.

Before Act 2015-227 took effect, it was public knowledge that the top ten executives at BCBSAL saw their compensation double from 2011 to 2013.

Reporter John Archibald described the new law as “royal treatment” for BCBS of Alabama, and it’s certainly concerning that executive compensation for the carrier is now protected from the public eye. But residents of Alabama are still protected by the ACA’s medical loss ratio, which requires carriers to spend at least 80% (85% in the large group market) of premiums on medical care and “quality improvements,” with administrative expenses — including executive compensation — coming out of the remaining 20% (15% in the large group market).

The federal government operates the health insurance marketplace in Alabama, based on then-Gov. Robert Bentley’s November 2012 decision against a state-run marketplace. Bentley cited annual operating costs of up to $50 million as his reason for opting for a federally operated exchange, although it should be noted that the federal government does not run its exchange for free — CMS charges a fee equal to 2.75% of premiums in 2022 in states that rely on the federally-run exchange (this percentage has fluctuated over the years).

The decision against a state-run exchange came somewhat as a surprise. While the Republican governor consistently opposed many provisions of the Affordable Care Act, he repeatedly expressed support for a state health insurance exchange. Bentley supported exchanges during his campaign for governor, and as governor, he used an executive order to establish the Alabama Health Insurance Exchange Study Commission. In November 2011, that commission unanimously recommended Alabama implement a state-run exchange. However, bills to establish a state-run exchange failed to pass in both the 2011 and 2012 sessions.

Alabama has not expanded Medicaid. Former Gov. Bentley opposed Medicaid expansion, and his position became the subject of campaign ads, editorials, billboards, and websites during 2014. Late in 2014, Bentley reintroduced a discussion on Medicaid expansion. Bentley said his administration would explore options to obtain federal Medicaid funding for a state-designed solution with a work requirement for recipients. Conservative groups promptly accused Bentley of flip-flopping, but nothing had come of his Medicaid expansion talk as of 2017 when he resigned amid a scandal.

His successor, Governor Kay Ivey, has rejected Medicaid expansion efforts since taking office in 2017. As of 2022, there are still a dozen states that have not expanded Medicaid, and Alabama is one of them.

From a humanitarian standpoint, a Kaiser Family Foundation analysis estimates that there are 127,000 Alabama residents in the coverage gap as a result of the state’s refusal to accept federal funding to expand Medicaid. These people are not eligible for Medicaid due to the state’s strict eligibility requirements, but they also aren’t eligible for ACA subsidies in the exchange because their incomes are under the poverty level.

Read more about Medicaid in Alabama.

Other types of health coverage in Alabama 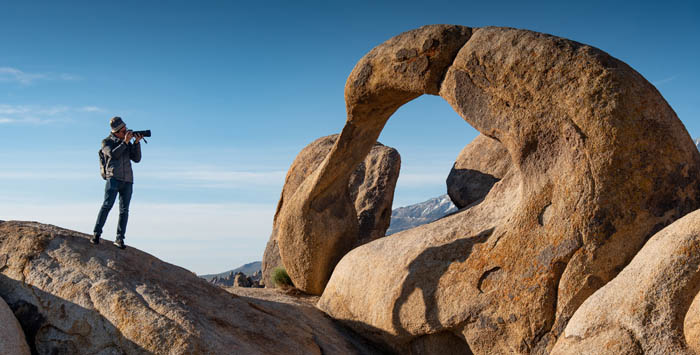 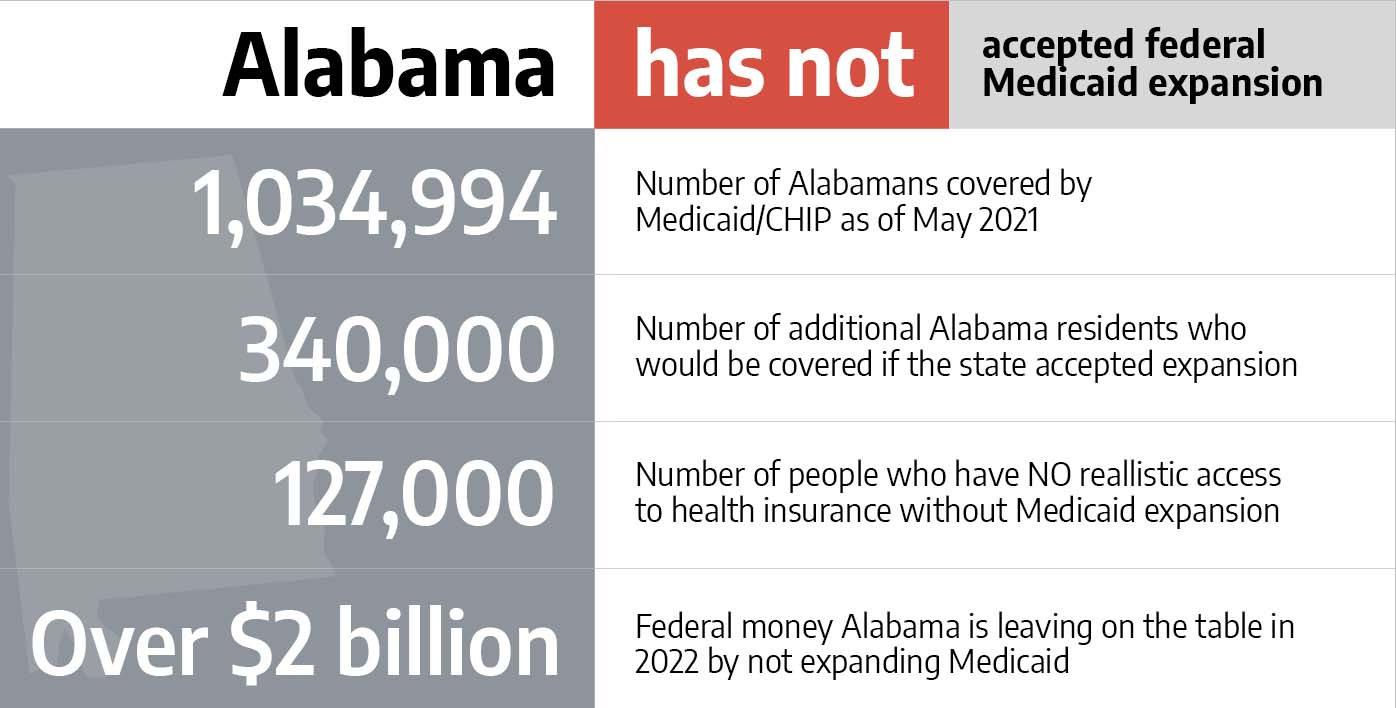 Alabama has not accepted federal funding to expand Medicaid eligibility under the ACA. 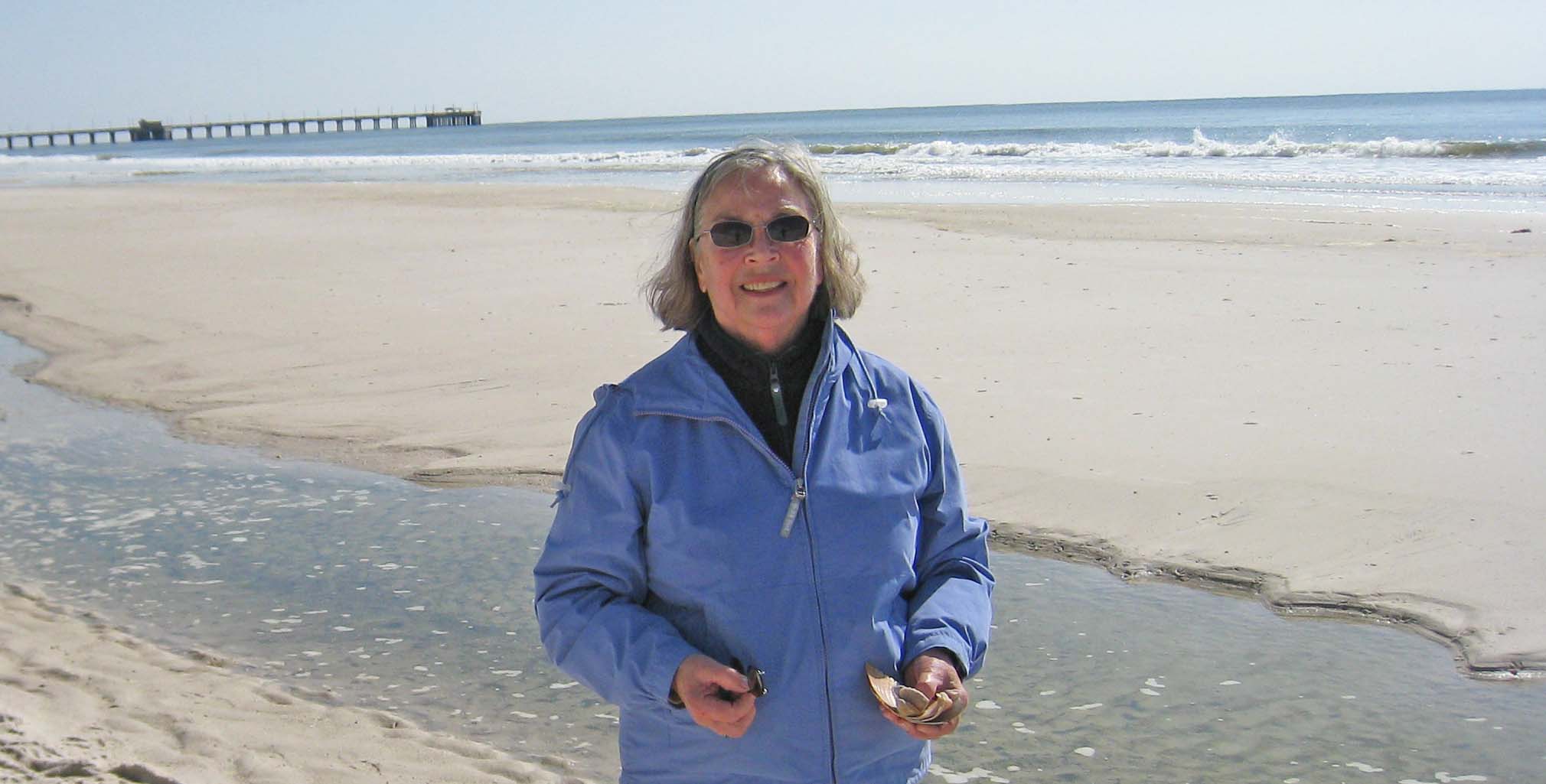 More than a million Alabama residents have Medicare coverage; More than half of them have selected Medicare Advantage plans. 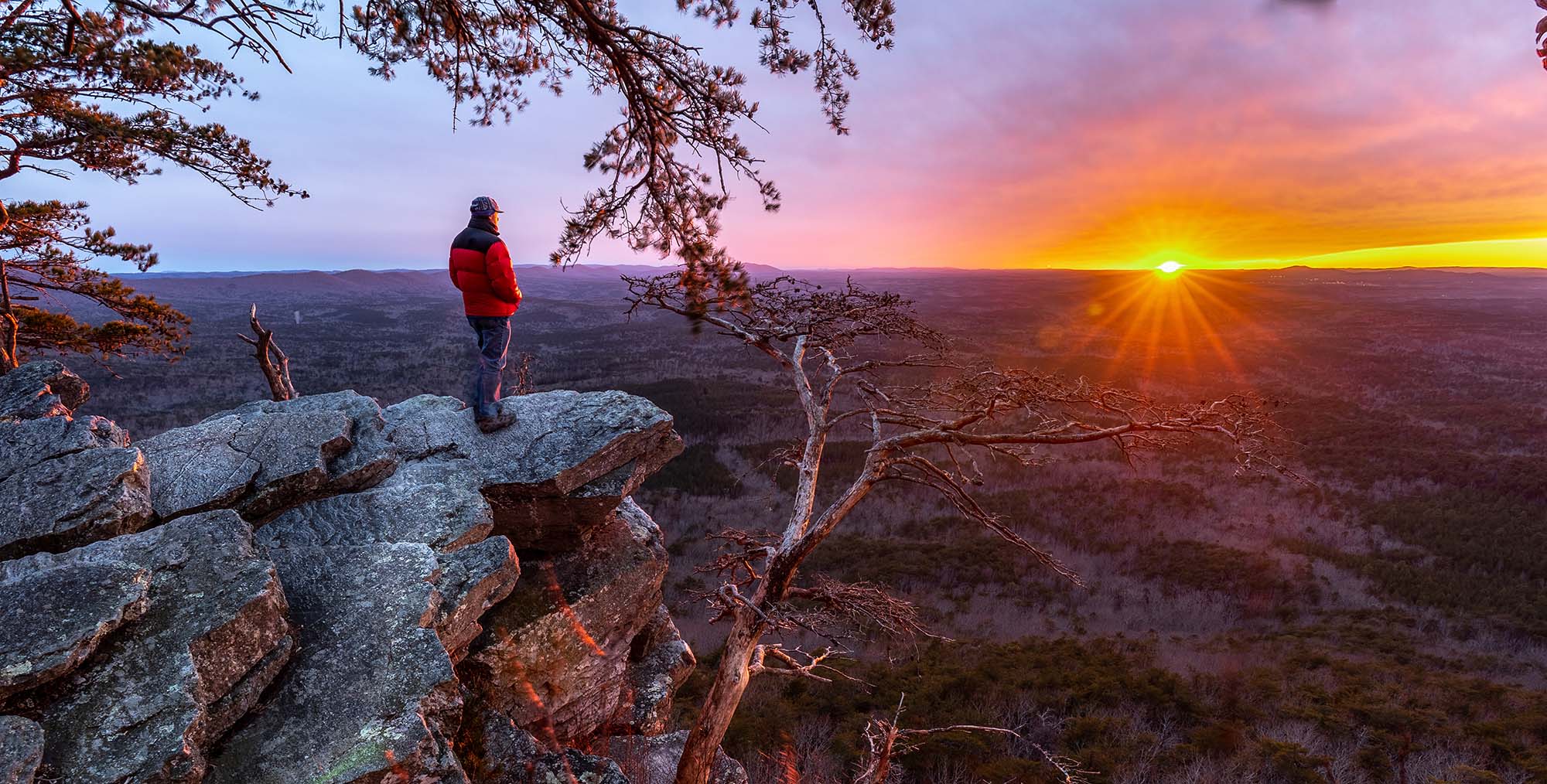 Overview of coverage options in Alabama 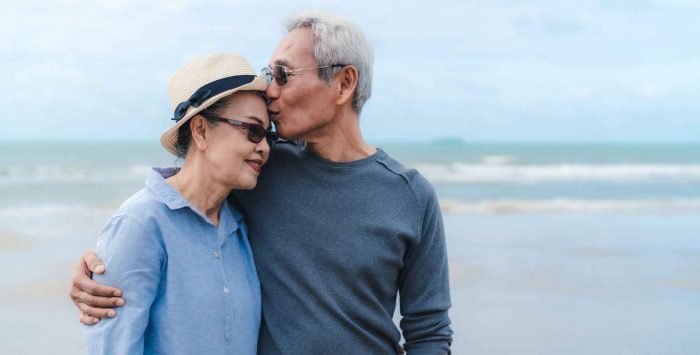 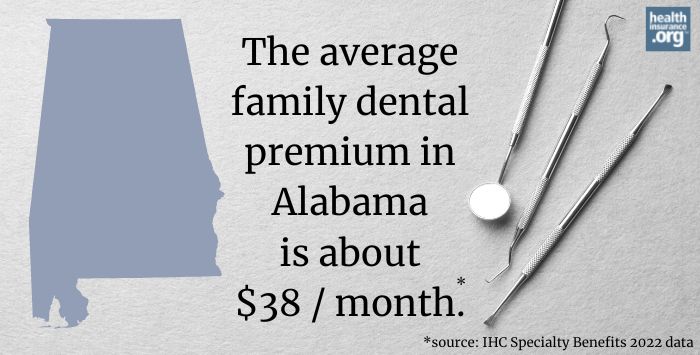 Learn about adult and pediatric dental insurance options in Alabama, including stand-alone dental and coverage through Alabama's marketplace.