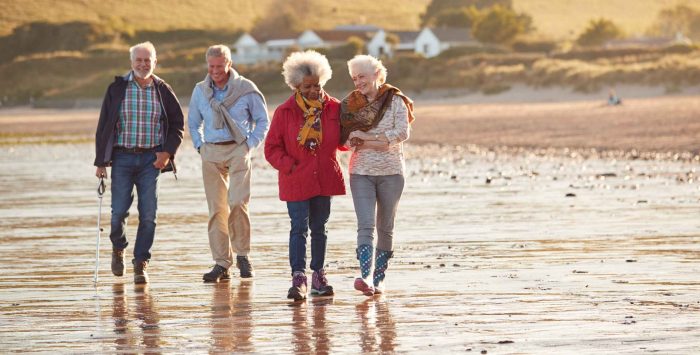 357,205 residents were enrolled in Medicare in Maine as of October 2021. That’s 26% of the state’s total population, compared with about 19% of the United States population with Medicare coverage.

Maine’s substantial Medicare enrollment is not surprising, given that it has the highest percentage of residents age 65+ in the country. Medicare eligibility is also triggered for younger people who are disabled for at least two years, or diagnosed with ALS or end-stage renal disease. Nationwide, about 14% of Medicare beneficiaries are under the age of 65, but this is also higher in Maine, where 17% of Medicare beneficiaries are under 65.

Original Medicare includes Part A (also called hospital insurance, which helps pay for inpatient stays) and Part B (also called medical insurance, which helps pay for outpatient care and preventive healthcare services). Medicare Advantage plans bundle Parts A and B under a single monthly premium and often include other services like Part D prescription drug coverage and dental/vision coverage. There are pros and cons to either option, and the “right” solution is different for each individual.

Medigap plans are standardized under federal rules — plans are designated by letter, from A through N; all Medigap insurers must offer at least Plan A and also offer at least Plan C or Plan F in addition to Plan A (note that under federal rules, Plan C and Plan F cannot be sold to people who weren’t already eligible for Medicare in 2019 or earlier).

People are granted a six-month window, when they turn 65 and enroll in Original Medicare, during which coverage is guaranteed issue for Medigap plans. Federal rules do not, however, guarantee access to a Medigap plan if you’re under 65 and eligible for Medicare as a result of a disability. And after the initial six-month open enrollment period ends, federal rules do not allow enrollees guaranteed-issue access to Medigap plans (including switching from one plan to another) unless they experience one of the limited situations that trigger a guaranteed-issue right.

But Maine has much more extensive Medigap regulations, designed to protect consumers and ensure greater access to Medigap. Maine’s rules are explained in the state’s Consumer Guide to Medicare Supplement Plans, and include several provisions:

For 2022 coverage, there are 21 stand-alone Medicare Part D plans available in Maine, with premiums ranging from $8 to $103 per month.

Medicare Part D enrollment is available when a person is first eligible for Medicare, and there’s also an annual open enrollment period (October 15 – December 7) when beneficiaries can enroll in Part D coverage or switch to a different plan for the coming year.

How does Medicaid provide financial assistance to Medicare beneficiaries in Maine?

Our guide to financial assistance for Medicare enrollees in Maine includes overviews of these programs, including long-term care coverage, Medicare Savings Programs, and eligibility guidelines for assistance.

Medicare in Maine: Resources for beneficiaries and their caregivers

Need help with your Medicare application in Maine, or have questions about Medicare eligibility in Maine? These resources provide free assistance and information.