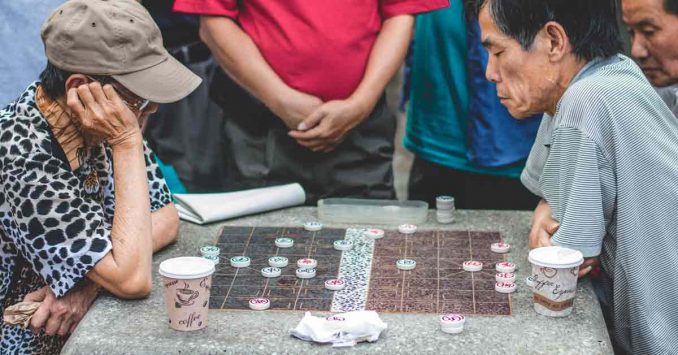 Medicare, a healthcare insurance program for older and disabled Americans, operates under the guidance of the Centers for Medicare and Medicaid (CMS). CMS is part of the federal Department of Health and Human Services (HHS).

Medicare beneficiaries can choose to receive their benefits directly from the federal government via Original Medicare — along with supplemental coverage for prescriptions and out-of-pocket costs — or enroll in private Medicare Advantage plans (as long as Advantage plans are available in their area, which is the case in most of the country, including all of New York).

As of late 2021, more than 3.7 million people were covered by Medicare in New York, amounting to more than 19% of the state’s population.

In most cases, Medicare enrollment goes along with turning 65 years old. But people who have been receiving disability benefits for at least 24 months are also eligible for Medicare, as are people with ALS or end-stage renal disease (those latter two groups do not have to wait 24 months for their Medicare eligibility to take effect).

In New York, 12.6% of Medicare beneficiaries are under 65 and eligible due to disability, which is the same as the nationwide average (it varies considerably from state to state).

The Medicare Advantage carriers dominating the market in New York are led by UnitedHealth Group, which held 18% of MA market share in 2022. Between late 2019 and early 2022, enrollment in UnitedHealth Group MA plans was virtually unchanged. (See table below). 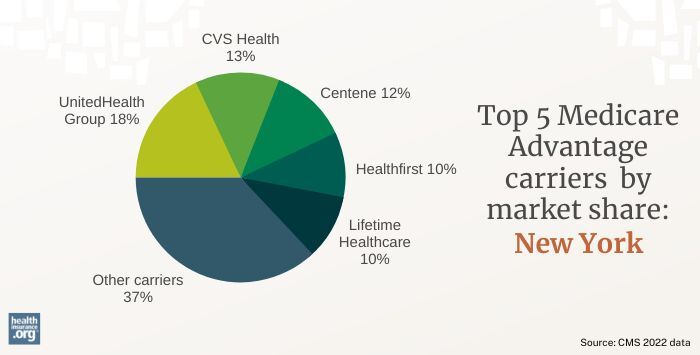 For those without access to either of those options, Medigap plans (also known as Medicare supplement plans) are designed to pay some or all of the out-of-pocket costs (deductibles and coinsurance) that Medicare beneficiaries would otherwise have to pay themselves (in order to have prescription coverage, it’s also necessary to buy a Medicare Part D plan, as Medigap plans sold since 2006 do not include prescription coverage).

Although Medigap plans are sold by private insurers, the plans are standardized under federal rules. There are ten different plan designs (differentiated by letters, A through N; not all insurers offer all plans for sale), and the benefits offered by a particular plan (Plan A, Plan G, etc.) are the same regardless of which insurer is selling the plan. So consumers can base their plan selection on premiums and less tangible things like customer service, since the benefits themselves are uniform.

New York has among the strongest Medigap consumer protections in the nation. As long as a person in New York is enrolled in Medicare Parts A and B, they can enroll in a Medigap plan at any time, year-round, and premiums do not vary based on the applicant’s age or health status. This is also true for enrollees who are under 65 and eligible for Medicare due to a disability. Premiums do vary from one insurer to another, and from one area to another (2022 premiums are available here; an insurer can only vary the price of a particular Medigap plan based on where enrollees reside).

New York’s rules go far beyond the federal rules, and beyond the rules that most states have imposed on Medigap insurers. (Connecticut is the only other state where Medigap is available year-round, without medical underwriting; a handful of other states offer windows each year when some or all plans are guaranteed-issue). Federal rules do not require an annual open enrollment window for Medigap plans. Instead, federal rules provide only a one-time six-month window when Medigap coverage is guaranteed-issue, starting when the person is at least 65 and enrolled in Medicare Part B. And federal rules don’t guarantee access to Medigap plans at all for people who are under 65 and enrolled in Medicare due to a disability. New York’s rules are much more robust.

Because of the year-round availability, community rating, and lack of medical underwriting, premiums for Medigap enrollees in New York are generally higher than they are in most other states when enrollees are 65. But this Medigap premium chart from Alaska is a good example of how high Medigap premiums can be for older enrollees in states that allow Medigap insurers to increase premiums over time, as an enrollee ages (referred to as attained-age rating, as opposed to New York’s community rating). Although the rates are higher for newly eligible enrollees, older enrollees pay the same amount as younger enrollees.

New York also has fewer Medigap insurers than most high-population states with fewer Medigap regulations. For example, Arizona, which defaults to the federal rules for Medigap plans, had 69 insurers offering policies as of 2020.

In 2022, insurers in New York are offering 19 stand-alone Medicare Part D plans for sale, with premiums ranging from about $7 to $101 per month.

Our guide to financial assistance for Medicare enrollees in New York includes overviews of these programs, including Medicare Savings Programs, long-term care coverage, and eligibility guidelines for assistance.

Helpful resources for New York Medicare beneficiaries and their caregivers

Need help with your Medicare application in New York, or have questions about Medicare eligibility in New York? These resources provide free assistance and information.