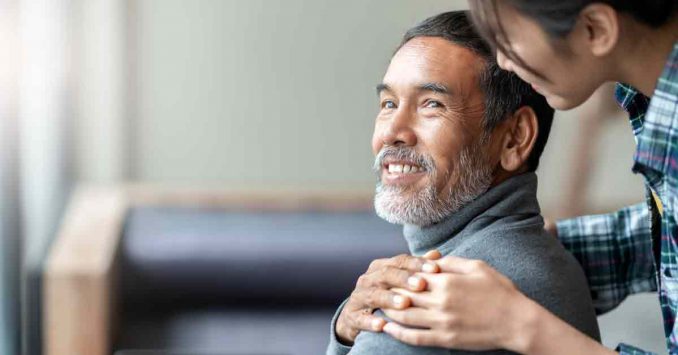 The number of Medicare beneficiaries in Texas stood at 4,441,418 as of April 2022. Only Florida and California have more residents enrolled in Medicare.

But less than 15% of the Texas population is enrolled in Medicare, compared with about 19% of the United States population enrolled in Medicare. Texas has among the youngest populations in the country, and since most people become eligible for Medicare enrollment when they turn 65, the state’s lower median age results in a smaller percentage of its residents filing for Medicare benefits.

Although most people become eligible for Medicare coverage enrollment when they turn 65, Medicare also provides coverage for people under age 65. Those who have been receiving disability benefits for 24 months, have ALS, or have end-stage renal disease are eligible for Medicare. Twelve percent of all Medicare beneficiaries in Texas — and nationwide — were under the age of 65 as of April 2022.

In most areas of the country, Medicare beneficiaries can choose Original Medicare or a Medicare Advantage plan.

Original Medicare is provided directly by the federal government and includes Medicare Parts A and B. Medicare Part A, also called hospital insurance, helps to pay for inpatient stays at a hospital, skilled nursing facility, or hospice center.

Medicare Advantage plans are administered by private insurance companies that have contracts with the federal government. Medicare Advantage plans include all of the benefits of Original Medicare (albeit with different cost-sharing, as the plans set their own deductibles, coinsurance, and copays, within the limits established by the federal government), and they typically have additional benefits, such coverage for prescription drugs, dental, and vision.

But provider networks are often limited with Medicare Advantage plans, and out-of-pocket costs are typically higher than a person would have if they opted for Original Medicare plus a Medigap plan. In short, there are pros and cons either way, and no one-size-fits-all solution.

Medicare Advantage plans are available in all 254 counties in Texas in 2022, but plan availability ranges from as few as 12 plans some of the state’s service areas to as many as 108 plans for sale in Harris County.

Between late 2019 and early 2022, UnitedHealth Group saw a 157% increase in Medicare Advantage enrollment in Texas. With 867,130 Californians enrolled in its MA plans in February 2022, the carrier had the highest market share – 46% – out of a field of 25 carriers selling MA plans in the state. 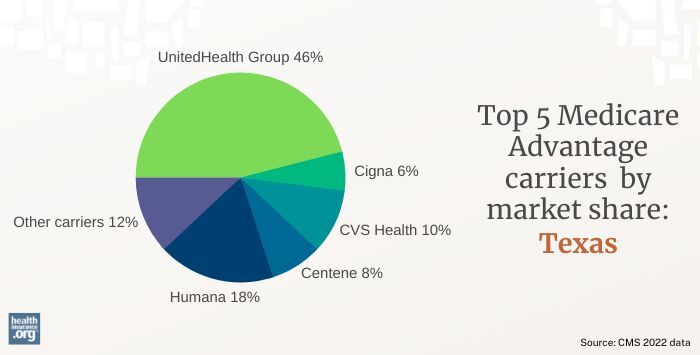 More than half of Original Medicare beneficiaries have supplemental coverage provided by an employer-sponsored plan or Medicaid. But for those who don’t, Medigap plans (also known as Medicare supplement plans) are designed to pay some or all of the out-of-pocket costs (deductibles and coinsurance) that enrollees would otherwise have to pay themselves. Since Original Medicare does not include a cap on out-of-pocket costs, most enrollees maintain some form of supplemental coverage, and Medigap plans are one way to do this.

According to an AHIP analysis, there were 918,619 Texas Medicare beneficiaries with Medigap coverage as of 2020.

There are 71 insurers licensed to sell Medigap plans in Texas.

Although Medigap plans are sold by private insurers, the plans are standardized under federal rules. There are ten different plan designs (differentiated by letters, A through N), and the benefits offered by a particular plan (Plan A, Plan F, etc.) are the same from one insurer to another.

Unlike other private Medicare coverage (Medicare Advantage and Medicare Part D plans), there is no annual open enrollment window for Medigap plans. Instead, federal rules provide a one-time six-month window when Medigap coverage is guaranteed-issue. This window starts when a person is at least 65 and enrolled in Medicare Part B (you have to be enrolled in both Part A and Part B to buy a Medigap plan).

Although disabled Americans under the age of 65 are eligible for Medicare, federal rules do not guarantee access to Medigap plans for people who are under 65. But the majority of the states — including Texas — have implemented rules to ensure that disabled Medicare beneficiaries have at least some access to Medigap plans. Texas law requires Medigap insurers to offer at least Medigap Plan A to disabled enrollees under age 65, during the six-month period that begins when they’re enrolled in Medicare Part B. Medigap Plan A is the least comprehensive of the Medigap plans, but it will cover the 20% Part B coinsurance that the enrollee would otherwise have to pay out-of-pocket.

Disabled Medicare beneficiaries under the age of 65 have another six-month Medigap open enrollment period when they turn 65. At that point, they have access to any of the available Medigap plans, at the standard premiums that apply to people who are enrolling in Medicare due to turning 65 (premiums are generally significantly higher for Medicare beneficiaries under age 65, since their disabilities result in more costly medical care).

Part D coverage can be purchased as a stand-alone plan, or as part of a Medicare Advantage plan that includes Part D prescription drug coverage.

As of April 2022, there were 1.55 million Medicare beneficiaries in Texas with stand-alone Medicare Part D plans. An additional 1.84 million Texas residents had Medicare Part D coverage integrated with their Medicare Advantage plans. As Medicare Advantage enrollment has grown, the number of people with Part D coverage integrated with Advantage plans has also grown, while the number of people with stand-alone Part D plans (used in conjunction with Original Medicare) has decreased.

Medicare Part D enrollment follows the same schedule as Medicare Advantage. Beneficiaries can enroll in Medicare Part D plans when they’re first eligible for Medicare, and there’s also an annual enrollment window (October 15 to December 7) when people can enroll or switch to a different plan.

How does Medicaid provide financial assistance to Medicare beneficiaries in Texas?

Our guide to financial assistance for Medicare enrollees in Texas includes overviews of these benefits, including Medicare Savings Programs, long-term care coverage, and eligibility guidelines for assistance.

Helpful resources for Texas Medicare beneficiaries and their caregivers

Need help with your Medicare application in Texas, or have questions about Medicare eligibility in Texas? These resources provide free assistance and information.