Note to readers:
I welcome reader comments and questions, and will try my best to reply in a timely manner. I ask only that you do your part to keep our discussion both reasoned and polite. – MM

A blizzard of misinformation has convinced many that the Affordable Care Act’s mandate that they buy comprehensive insurance – or pay a penalty – represents a new tax on the middle class that they just can’t afford.

In reality, the Congressional Budget Office (CBO) estimates that less than 1.5 percent of all Americans will pay the penalty, and in 2014, it will be modest. In 2015 and 2016 the tax rises, but the Supreme Court has ruled it will not constitute an “exceedingly heavy burden.”

“Wrong,” says the Tax Foundation, a non-profit that describes itself as “non-partisan” – though others call it a “non-partisan, right-leaning” group. In either case, one would expect that the Tax Foundation would know the facts about taxes, and serve them straight-up. But in July, when the Foundation published a report claiming that the penalty is “a big tax” that will “hit low-income and middle-income families hardest, it wasn’t just “leaning” right – it was standing on its head to turn reality upside down.

Try out healthinsurance.org’s new health insurance penalty calculator and you will find that the tax does not favor the wealthy. Indeed, as the Congressional Research Services (CRS) chart below reveals, poor and middle-income households will pay less. 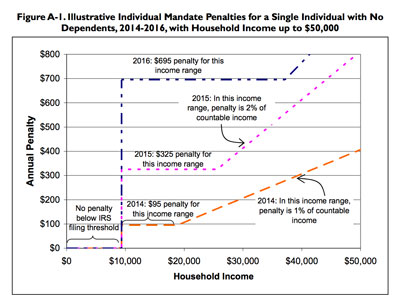 Data from the Congressional Research Service shows that poor and middle-class households would play a lower penalty for not having health insurance as required by the ACA’s individual mandate.

Meanwhile, if a couple hauling in over $400,000 decides not to join the insurance pool, they would be asked to match the cost of the least expensive policy that covers “essential benefits” – or roughly $12,500 – according to the CBO.

This is the most anyone would be asked to pay. (Because the tax is capped, a family earning $1 million would pay a lower percentage of their income; this is the Foundation’s justification for calling the tax “regressive.”)

In 2015, as the purple line in the middle of the chart reveals, the penalty becomes stiffer, though a family earning under $100,000 still owes far less than a household bringing in $200,000. In 2016, the penalty peaks. Even then, if parents with two children earning $100,000 decide to continue to forego insurance (which seems, to me, unlikely) they would owe only about $2,500. 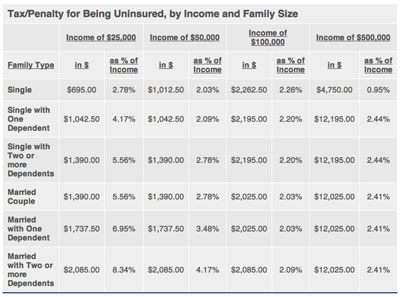 Tax Foundation claims that the ACA’s health insurance penalty will hit low- and middle-income families the hardest, but ignores some obvious facts, says Maggie Mahar. Click on the image for a larger version of the graph.

At the right, a Tax Foundation table pretends to show the “Tax/Penalty for Being Uninsured, by Income and Family Size.”

Health reform’s opponents usually prefer a scatter-shot approach to distributing misinformation. Rarely do they arrange their fibs neatly, in a table that is easy to analyze. Yet the Foundation has done just that.

Begin at the bottom left corner. There, we’re told that under the ACA an uninsured couple with two children earning $25,000 would owe $2,085. Here, the Foundation ignores that fact that reform legislation calls for expanding Medicaid to include any family of four living on less than $31,809.

The household earning $25,000 would be insured, and wouldn’t owe a dime. But the Foundation chooses to assume that in 2014 many states will refuse to open the door to Medicaid – even though the federal government will be paying the full cost of the expansion – and thus millions of low-income families will be left out in the cold.

Granted, in June, the Supreme Court ruled that Washington cannot punish a state that doesn’t enlarge Medicaid by taking away its current Medicaid funding. But few states will turn down Washington’s offer to expand the program. It’s not just that Washington will be paying 100 percent of the cost from 2014 to 2017; after that, the federal government would continue to cover 90 percent. (Today, Washington picks up just 57 percent of the Medicaid tab.)

In an effort to obstruct “Obamacare,” a few states may turn down the money in 2014. But by 2016, the pressure from hospitals, insurers and others who will benefit from federal Medicaid dollars flowing into the state will be intense. That money will create jobs. Some states will even save money by expanding Medicaid.

The Foundation speculates that six states will refuse Washington’s largesse. As evidence, it cites only the American Action Forum, a conservative think tank that actively opposes the Affordable Care Act.

The Tax Foundation also ignores the premium subsidies that the government will be giving to uninsured low-income and middle-class Americans. The Henry J. Kaiser Family Foundation estimates that a married 45-year-old with two children earning $60,000 would receive a $10,800 tax credit and pay only about $3,400 for comprehensive family coverage.

(This example assumes the family lives in a “moderately expensive part” of the country. If the same family lived in a region where hospitals and doctors charge more, they would receive a tax credit of $13,700 and still pay about $3,400. The subsidy rises with the premium.) Why would this family possibly refuse to buy insurance – and pay a $2,085 tax– when they are offered such a generous tax credit?

In order to exaggerate the size of the penalty, the Foundation’s table quotes only 2016 numbers, ignoring the fact the tax is phased in over three years. In 2014, an uninsured middle-class family of three will would pay just $285. And over the next two years, as that family became familiar with the benefits of the program, it’s likely that it would decide to join the pool. Very few will pay the 2016 penalties.

Ultimately, the Tax Foundation’s fears move from fiction to fantasy. Toward the end of the report, it suggests that “high income” families may find the tax so onerous that some will decide to “move to low-tax, low-healthcare-cost countries, such as Singapore.” Do you really see wealthy parents packing the kids up for Singapore, just to avoid paying buying them health insurance?