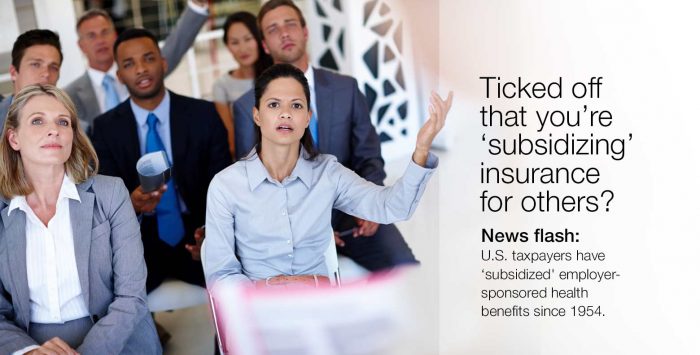 Chief among the objections to the Affordable Care Act (ACA) – particularly as the law was being implemented – was the fact that, as taxpayers, we were subsidizing the cost of health insurance for people not lucky enough to get benefits at work.

Four years after the law has been fully implemented, the news media continue to cover stories about the outrage of millionaires finding ways to qualify for tax credits to get health insurance at a discount.

But here’s what most people don’t know: As taxpayers, we’ve been subsidizing health insurance benefits for high-net-worth Americans for decades. In fact, since 1954, employer-sponsored health insurance – which is how the majority of Americans get their coverage – has been a tax-free benefit, making it the single largest annual federal tax expenditure (i.e., a loss of revenue for the federal government).

It cost taxpayers $250 billion in 2015 and is expected to cost $3.2 trillion between 2016 and 2025, dwarfing what we spend on tax credits to lower the cost of coverage for people buying plans through ACA marketplaces.

Employees tend to rank health benefits high on their list of priorities when job searching. Very few, however, understand how heavily their coverage is subsidized (or that it’s subsidized at all!) by taxpayers. What’s more, this tax exclusion grows as incomes rise, meaning the highest earners are the most heavily subsidized.

In short, we’ve been providing financial help to those in our society that least need it while millions of low- and middle-income people without work-based health insurance buckle under the weight of rising costs.

Health insurers selling policies on the marketplaces set up under the ACA have begun to submit rates for 2017. The Kaiser Family Foundation just released a study of 14 major metropolitan areas for the second-lowest cost Silver plan and found that rates could rise overall by about 10 percent.

Look closely at the proposed rates of individual insurers around the country, however, and you’ll find some jaw-dropping premium increases that far exceed 10 percent.

For example, the New York Times reported that Geisinger Health Plan in Pennsylvania filed for a 40 percent increase in 2017. In Arizona and Oklahoma, insurers are proposing a rate increase of 50 percent. Blue Cross and Blue Shield of Texas is filing for a whopping 60 percent jump. Nationally, plans sold through the marketplace are averaging about a 21 percent increase in prices, according to acasignups.net, which closely monitors the law.

Once reviewed by state regulators, the final rates are likely to be lower in most cases than those proposed. Still, most experts agree 2017 will bring higher spikes in premiums than in years past for a number of reasons, including fewer people signing up for coverage through the marketplaces in 2016, patients with higher-than-expected medical costs, and two temporary ACA programs intended to stabilize markets – the reinsurance and risk corridor programs – coming to an end this year.

Don’t panic. Things aren’t as bad as they seem.

Advocates of the law say these proposed rates are no cause for alarm. Most people enrolled in a marketplace plan won’t end up paying double-digit premium increases, even if they pass regulator review.

That’s because more than eight in 10 (83 percent) consumers buying coverage through the marketplaces – about 12 million people, according to the latest Congressional Budget Office (CBO) numbers – get tax credits to help cover the cost of their premiums. Combined with the ability to shop for a new, lower cost plan each year, most consumers won’t end up paying much higher premiums, even as prices rise.

But that same CBO analysis found that just as many people – about 3 million buying a health plan through the marketplaces and 9 million from other sources – don’t qualify for tax credits under the law. These folks are left to pay the full cost of coverage out of their own pockets.

Rising premiums and high out-of-pocket costs are squeezing these middle income Americans, raising concerns that many will be priced out of the market. This is an especially difficult situation for older Americans with incomes just above the current level to qualify for a tax credit and who tend to use more medical services, and therefore incur more costs, than the young.

Despite what many economists see as a very poorly designed tax policy, the health premium tax exclusion for job-based benefits has been a tough one to change.

“Organized labor has always been a very big defender of it. Employers in general like it because they use it to provide a benefit that helps them recruit the kinds of workers they want,” says Linda Blumberg, senior fellow in the Health Policy Center at the Urban Institute.

But with a functioning non-group insurance market now in place under the ACA, there’s an opportunity to redistribute funds, and expand health insurance coverage by offering broader financial assistance for people with mid-range incomes who buy insurance on their own.

“You’re starting to see a market where if you began messing around with [employer-based tax exclusions] and even lost some employer plans, it’s not the same disaster as it would have been before [the law took effect],” Blumberg says.

We’re projected to spend $35 billion in 2017 on tax credits to help lower the cost of coverage for people buying plans through ACA marketplaces. This accounts for both premium tax credits and cost-sharing reductions. This pales in comparison to the estimated $356 billion we’ll forego to subsidize workers’ benefits the same year.

The Cadillac tax … and other options

The ACA’s “Cadillac tax” is one way the government has sought to redistribute funds. It requires employers to pay a 40 percent excise tax on the value of health benefits they offer that exceed $10,200 per year for an individual and $27,500 for families.

But the future of the tax is in question; it has been delayed several times, now scheduled to take effect in 2020. Business and labor groups across the political spectrum have called for it to be repealed entirely. If nixed from the law, a significant source of revenue for the federal government to support the ACA would be lost.

There’s another way to even the playing field, albeit one unlikely to be any more popular than the Cadillac tax.

According to analysis by the Urban Institute, placing a cap on the value of work-based health benefits that can be tax free would increase taxes for workers in proportion to their incomes. It does this by requiring them to pay taxes on employer contributions above the cap. Taxes in this case would increase more for high-income people than for low-income people, the report says.

The tax break we give employee health benefits is currently limitless, Blumberg points out. “I could take a million dollar insurance plan and still get a tax break on it,” she says.

The upshot: By placing a cap* on the portion of an employer-based health plan that’s tax free and redistributing even a tiny fraction of the federal subsidies given to high income employees, we could offer marketplace subsidies to more middle income Americans who currently struggle to afford robust coverage.