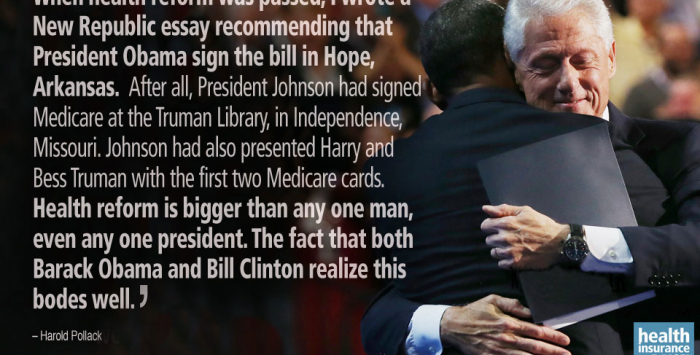 But then President Clinton walked up to the podium and made everyone pretty much forget what they had just heard. Over the next 48 minutes, he delivered the best speech of the 2012 campaign. How good was it? Republican commentator Alex Castellanos concluded that this speech will be remembered as “the moment that probably reelected Barack Obama.” No one in American politics can rival Clinton’s ability to weave history and policy detail into a stem-winding performance that remains somehow compelling to average voters.

Clinton began by praising President Eisenhower for desegregating Arkansas schools. Clinton (rightly) praised George W. Bush for the one shining achievement of the Bush 43 administration: the President’s Emergency Plan for AIDS Relief (PEPFAR), which has saved millions of lives. Clinton then marched down a list of particulars to excoriate today’s Republicans on everything from welfare and taxes to voter ID laws to jobs policies and health care.

Clinton started late and went way over his allotted time. Sarah Kliff of the Washington Post captured this well in a tweet: “Bill Clinton’s prepared remarks: 3,136 words. Bill Clinton’s remarks as delivered: 5,895 words.” No one in the hall, and I bet no one at home, really cared that he was running over.

Clinton touched all the bases on Democratic bases on Medicare. He provided the kind of full-throated defense of health reform the White House itself has struggled to make. Yet Clinton drew the most blood striking Paul Ryan’s prevarications at the convention last week:

When Congressman Ryan looked into the TV camera and attacked President Obama’s “biggest coldest power play” in raiding Medicare, I didn’t know whether to laugh or cry. You see, that 716 billion dollars is exactly the same amount of Medicare savings Congressman Ryan had in his own budget.

Clinton further ad-libbed: “It takes some brass to attack a guy for doing what you did.” At that precise moment, the camera cut away to Michelle Obama. The First Lady looked a bit stunned that Clinton had gone there, but she seemed to enjoy things just the same.

To my mind, the best part of the speech concerned Medicaid. These issues have gotten much less attention than Medicare has. Yet the human consequences of cutting Medicaid services to low-income, elderly, and disabled people are much more immediate and severe, not least because Medicaid recipients lack the political and economic resources to fight back:

But it gets worse. They also want to block grant Medicaid and cut it by a third over the coming decade. Of course, that will hurt poor kids, but that’s not all. Almost two-thirds of Medicaid is spent on nursing home care for seniors and on people with disabilities, including kids from middle class families, with special needs like Downs syndrome or Autism. I don’t know how those families are going to deal with it. We can’t let it happen.

Some reporters expressed surprise that Clinton offered such a full-throated endorsement for his successor and his wife’s bitter rival. There’s a history of real frictions between the two men. Their personalities could hardly be more different, too.

But these tensions are only part of the story. Clinton and Obama agree on core matters of public policy. They had similar health plans during the 2008 primaries. They have hired many of the same people to run their administrations. President Clinton has a vested interest in a successful Obama presidency, which is in so many ways a continuation of his own.

Clinton also has special reason to reject the health policies Mitt Romney and Paul Ryan have proposed. Clinton was governor of Arkansas during the 1980s, when Medicaid was expanded beyond its traditional welfare population to cover poor women and children. This brought significant resources to poor states such as Arkansas. Work by Janet Currie and Jon Gruber indicates that such policies reduced infant mortality. Clinton saw first-hand Medicaid’s importance.

President Obama could never have enacted health care reform without the foundation provided by Bill and Hillary Clinton in their ill-fated effort. Many of President Obama’s closest health policy advisors were old Clinton hands. It’s true that President Obama succeeded where President Clinton had failed. The outcome was different because Democrats enjoyed a larger and more solid congressional majority in 2009-10 than President Clinton ever did, not because of any difference in political skills or determination between the two presidents.

When health reform was passed, I wrote a New Republic essay recommending that President Obama sign the bill in Hope, Arkansas. After all, President Johnson had signed Medicare at the Truman Library, in Independence, Missouri. Johnson had also presented Harry and Bess Truman with the first two Medicare cards. Health reform is bigger than any one man, even any one president.

The fact that both Barack Obama and Bill Clinton realize this bodes well.