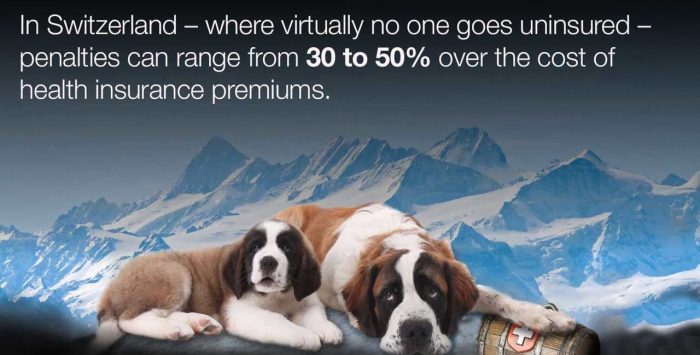 Would a heftier tax penalty for being uninsured fix anemic marketplace enrollment and help to prevent an ACA death spiral?

At least one health economist thinks so.

In a recently published article in Vox, Princeton’s Uwe Reinhardt was asked why the healthcare systems in Switzerland, Germany and the Netherlands – all of which have laws in place mandating health insurance coverage and like the United States primarily rely on private insurers to expand coverage – are working well, while our marketplaces under the Affordable Care Act are currently struggling. His response:

When they run these exchanges, they accompany them with a very harsh mandate. If you don’t obey the mandate, the Swiss find out, and they go after you and garnish your wages. If you’re not insured, they’ll look at your wages and recoup the premiums you owe. They’re very tough. And, we’ve never been that tough.

Getting tough on penalties

In the U.S., we too impose penalties for going without health insurance, which led to an average household pay out in 2016 of $969, according to the Kaiser Family Foundation. Estimates are that 7.1 million people paid the penalty this year for failing to have coverage in 2015.

Still, in Switzerland and other European countries, such as Germany and the Netherlands – as Dr. Reinhardt points out – they take a harder line when it comes to their citizens complying with the requirement to have health insurance.

For example, if after notice from the government, a Swiss citizen fails to sign up for insurance, Swiss cantons – the equivalent of states in the U.S. – can impose a penalty ranging from 30 percent to 50 percent above the cost of insurance premiums. If after three months the uninsured still doesn’t pick a plan, the authorities choose one for them, and allow insurers to sue for unpaid premiums.

The Germans impose hefty fines, that after a multi-step process of late fees, can climb to as much as $12,000. In the Netherlands, after a series of fines go unpaid, a bailiff may come to collect. Then the government may pick a health plan on a citizen’s behalf and deduct the cost of the premium from their pay with the help of their employer. If after six months a citizen still fails to pay, their insurance premiums spike.

It seems to work. Switzerland, for example, has virtually no uninsured citizens, according to a report of international health systems by the Commonwealth Fund. So why don’t we model enforcement of the law’s individual mandate after these other countries?

Robin Osborne, who heads The Commonwealth Fund’s International Health Policy and Practice Innovations Program, says the goal may have been to move the U.S. into the law’s new requirements more gently.

“Going out of the gate the idea was not to be punitive but to promote [the law] and make it as affordable as possible for people,” she says.

Let’s also not forget that the individual mandate is one of the most unpopular parts of an already unpopular and politically divisive law. And, beyond attempts to gently bring Americans along, the fact is that a harsher penalty may not do much to bring people into the marketplaces. That’s because the majority of the remaining 27.3 million uninsured Americans are exempt from the mandate, primarily because they’re very poor and the cost of coverage remains too high.

“If you ask most people who remain uninsured they would say it’s still not affordable,” says Linda Blumberg, senior fellow with the Health Policy Center at the Urban Institute. “If most people who are uninsured are exempt from the penalty, then what does [raising] it do? How many more people will you get by increasing it?”

The penalty is already increasing

Still, millions of people can afford coverage and choose instead to opt out and pay the penalty, sometimes citing that it’s far cheaper than the annual cost of a health plan, as this New York Times article highlights.

But that may change, says Sabrina Corlette with Georgetown University’s Center on Health Insurance Reforms. The cost of going without health insurance continues to rise under the ACA, reaching its peak this year at the lesser of $695 per person or 2.5 percent of household income. As with so many parts of the law, there’s a general lack of knowledge about the increasing penalties, and Americans on the hook won’t see the bill until early 2017 when they file taxes for 2016.

“It may be when the dust settles everyone will conclude the penalty isn’t high enough, but I feel like it may be too early to make that conclusion,” Corlette says.

According to the Tax Policy Center’s ACA Tax Calculator, someone earning $100,000 this year would pay about $2,400 in penalties for being uninsured. Compare that to the average premium of a Bronze-level plan at just shy of $2,700.

Given those numbers, will the calculus remain the same for those who have previously decided paying the penalty is preferable to buying a health plan?

Experts say there are a number of tweaks to the law needed to improve the state of the marketplaces. For one, making health insurance products more affordable and providing additional help paying for coverage through tax subsidies – particularly for middle income Americans – will be critical to expanding enrollment.

Last week, the CDC produced a report stating that the uninsured rate in the U.S. has dropped to an all-time low of just 8.6 percent. But as this article in Modern Healthcare points out, the report also found that approximately 40 percent of Americans under age 65 were enrolled in some kind of high-deductible health plan. According to eHealth, on top of annual premiums for individuals averaging about $3,900, average annual deductibles are more than $4,300. Generally, European countries with systems similar to ours don’t face the kind of out-of-pocket costs we do.

“Our big issue here is much less about us not penalizing people enough than it is about that we haven’t made the product attractive enough,” Blumberg says.

More outreach and education is also needed. Surveys have consistently found that groups with the highest uninsured rates were least likely to know about the marketplaces and the financial assistance available to them. According to the Kaiser Family Foundation, about 3.5 million people who remain uninsured and are eligible for subsidies “could either get coverage for free or end up paying less by enrolling in marketplace coverage than by remaining uninsured and paying the individual mandate penalty.”

Let’s also not forget that millions of people nationwide have been allowed to hold on to pre-ACA health plans. This is a population that got its coverage prior to the law’s prohibition on underwriting, meaning millions of healthy people who would otherwise be in the ACA insurance pool have been standing on the sidelines and will continue to do so until these plans phase out by the end of 2018.

Penalties can be effective to a point, but even in countries like the Netherlands, studies show that policies don’t solve for many underlying issues that lead people to not buy coverage, namely, high personal debt and financial problems. The bottom line: You can’t get blood from a stone.