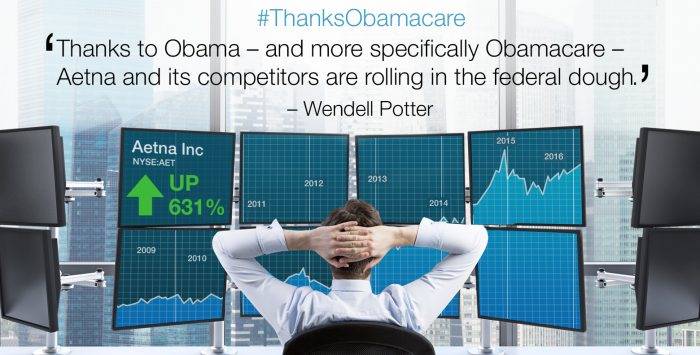 You might be thinking, based on what insurance company CEOs have been saying over the past few weeks, that carriers are awash in red ink because of Obamacare and would surely go bust if they had to keep paying the medical claims of their Obamacare customers for even one more year. You might even be shedding a tear or two for their poor shareholders.

In light of a second-quarter pretax loss of $200 million and total pretax losses of more than $430 million since January 2014 in our individual products, we have decided to reduce our individual public exchange presence in 2017, which will limit our financial exposure.

This despite the fact that since January 2014, the date Bertolini mentioned above, Aetna has reported operating profits of $6.7 billion. That’s right. Even though Bertolini said Aetna hasn’t yet turned a profit on its Obamacare business, overall it has pocketed nearly $7 billion.

So even though Aetna is still hugely profitable, it will stop offering coverage in most Obamacare markets because its bean counters recently noticed what Bertolini described as a spike in “individuals in need of high-cost care.’

Bertolini went to insist that, “Providing affordable, high-quality health care options to consumers is not possible without a balanced risk pool.” (It actually is possible, as some of Aetna’s nonprofit competitors – including nonprofit Kaiser Permanente and Blue Cross Blue Shield plans across the country – are dealing okay with the current risk pool and are not running for the exits. Some are already operating in the black.)

Those pesky policyholders who need care

Here’s the thing you need to know. Most of the people who buy coverage on the public exchanges are relatively poor and relatively sick. That’s because most of them were not able to afford Aetna’s policies in the many years before Obamacare became law. Now that those folks can finally afford coverage, thanks to Obamacare’s income-based subsidies, they’re also finally able to see a doctor and pick up their prescriptions. In other words, they’re actually using their insurance.

To make matters worse – at least in the eyes of for-profit health insurance company executives – there are not enough healthy, wealthy and young people buying Obamacare plans to make the “risk pool” more to their liking.

Having worked for nearly 20 years in the health insurance business, I can assure you that the top priority of executives of the for-profit companies is not to make sure low-income Americans can get the medical care they need. Nope. Not a chance. Those guys consider every claim they pay to be a loss (hence the term “medical loss ratio”). They’re in this business to make a buck.

Their top priority – just as it is with most other New York Stock Exchange corporations – is to “enhance shareholder value.” And every three months, what those executives want more than anything else is to impress Wall Street with its profits, to “exceed analysts’ expectations.” If they can do that, they can pretty much be certain that their company’s stock price will go up. And when that happens, something else will go up: their net worth. That’s because all of the top executives of for-profit health insurers, without exception, are sitting on a big stash of their company’s stock.

Here’s another data point Bertolini didn’t mention when he was announcing the planned dumping of most of its Obamacare enrollees: Since March 5, 2009 – the day President Obama kicked off the debate on what would become Obamacare – Aetna’s stock price has increased 631 percent.

One of the biggest beneficiaries of that big increase is none other than Mark Bertolini. According to the Hartford Courant, Bertolini received almost $28 million in compensation last year alone. Yes, $28 million. In one year. Almost $25 million of that was from gains in the value of Aetna stock that vested last year and on stock options the company gave him 10 years ago and which he exercised in 2015. (Note: Bertolini’s compensation also included $271,908 in perks, “mostly from the cost of using the corporate aircraft for personal use,” the Courant reported.)

And that’s not all, folks. Bertolini last year also received an additional $6 million in restricted stock and more than $8 million in stock options “whose ultimate value will be determined in future years.”

If you look at Aetna’s proxy, which the company filed with the SEC in April, you’ll see that at the end of 2015, the market value of the units of Bertolini’s stock that hadn’t yet vested totaled almost $44 million.

If you are an executive of a for-profit insurer, and you have to dump poor, sick people to meet your shareholders’ and analysts’ profit expectations – and to get quite a bit richer yourself – so be it. As I’ve written in the past, Aetna, in particular, is no stranger to that practice.

After announcing Aetna’s exit from most Obamacare exchanges in 2017, Bertolini made a point of telling those Wall Street analysts that his company would continue to offer coverage to people “off-exchange” in the “vast majority” of counties where it currently insures the Obamacare customers it will be dumping at the end of 2016.

Why? Because most of the people who buy coverage on the individual market “off-exchange” are healthier and wealthier than the poor folks unlucky enough to have pre-existing conditions – the folks insurers like Aetna shunned, legally, before Obamacare – and who can’t afford coverage without the financial help from the government they can get only if they enroll in a plan on an Obamacare exchange.

If you happen to be flush enough to be able to buy a policy off-exchange, you more than likely have not had to postpone needed care in the past like many of those poor folks previously considered by industry executives to be “uninsurable.” If you’re young and healthy, Aetna and the other for-profits will welcome you with open arms because you probably won’t need to file many medical claims.

Taxpayers delivered a boatload of profits

Now, here’s something else you need to know that most of the media ignored. Aetna made a boatload of money between April and June of 2016. Both revenue and profits were up considerably over the same period in 2015. Aetna’s operating earnings increased 8.5 percent, from $722.1 million during the second quarter of 2015 to $783.3 million in the second quarter this year. Total revenues for the quarter increased to almost $16 billion.

On a per-share basis, the company’s operating earnings more than exceeded analysts’ expectations, jumping from $2.05 a share during the second quarter of 2015 to $2.21 this year. Analysts had expected $2.12 per share. It’s not often that a company exceeds expectations that much.

Here’s something else you need to know about Aetna in particular. Its revenue growth “was primarily due to higher Health Care premium yields and membership growth in Aetna’s Government business, partly offset by membership declines in Aetna’s Commercial Insured products.”

During the first six months of this year, Aetna actually got almost as much revenue from taxpayers via the government’s Medicare and Medicaid programs ($13 billion) as it got from its privately insured customers ($14 billion). In fact, Aetna’s government business is growing while its commercially insured book of business is shrinking.

Aetna’s not alone. Most of the other for-profit insurers have also been losing private-paying customers for some time but more than making up for that loss from revenue they get from taxpayer-financed government health care programs.

And get this: Aetna and the other big insurers wouldn’t be getting as much profitable business from the government if not for Obamacare. Keep in mind that most of the newly insured Americans have coverage because of the Medicaid expansion made possible by Obamacare. Aetna and many of its competitors have benefited financially from this expansion because many states contract with private insurers to manage their Medicaid programs.

And then there is Medicare. Aetna and many other insurers participate in the Medicare Advantage program, the private alternative to traditional Medicare, and they’ve figured out how to convert a lot of the billions of dollars in revenue they get from the federal government to profits. And, according to the Kaiser Family Foundation, the Medicare Advantage program has been growing leaps and bounds in recent years, thanks to all the marketing dollars the insurers spend every year to attract Medicare beneficiaries.

So, thanks to Obama – and more specifically, Obamacare – Aetna and its competitors are rolling in the federal dough. But, because of the self-serving desire on the part of the for-profit companies’ executives to exceed Wall Street’s expectations every three months, they’re not willing to tolerate for another New York minute an Obamacare risk pool that, in their opinion, is crowded with too many sick people. People they never wanted to insure in the first place.

For-profits could learn a thing from nonprofits

One of the reasons the big for-profits are not doing so well in the Obamacare marketplace is because, unlike many of the nonprofits health plans, they didn’t devote sufficient resources up front, like the Florida Blue Cross and Blue Shield company, to help them weather the volatility of the risk pool Bertolini complained about. As Bruce Japsen reported this week in Forbes:

Florida Blue said it began to prepare for Obamacare patients and their expensive medical claims three years ago when the rollout of coverage was dogged by technical issues of the Healthcare.gov web site. Back then, Florida Blue opened 20 retail centers across the state to sign up residents and the investment paid off.

New Obamacare patients were assigned a care manager, generally a nurse who screens patients making sure they are getting outpatient care upfront before more expensive claims emerged down the road. In the first three years that Obamacare has been available, Florida Blue said more than 400,000 Florida residents have visited a retail center.

Contrast that with Aetna and its for-profit peers like United and Humana, both of which have also said they plan to greatly reduce their presence in the Obamacare marketplace. Because of the short-term focus of the for-profits’ caused by the need to please Wall Street every three months (and for executives to pad their own wallets), investing for the long haul like Florida Blue did is not likely to happen. And with shareholder value at stake, it’s an easy call for those executives to abandon customers who are most in need of health insurance.

Executives of the nonprofits, fortunately, are not under the same pressure from Wall Street and their fellow executives and, frankly, are able to view the world – and the Obamacare marketplace – a little differently.

“I view it through the lens of my mission,” Kaiser Permanente CEO Bernard Tyson told Modern Healthcare reporter Bob Herman last week. “It obligates to us to figure it out, not to get out.”

Tyson said his company, a $61 billion system that includes health plans, hospitals and medical groups, is “absolutely” sticking with the exchanges over the long term.

“The idea that I would turn my back on a segment of the American population who really needs the coverage and the care – I’m in for the long haul,” Tyson said.

It’s too bad – especially for the millions of people who will soon be dumped by their for-profit insurers – that other CEOs don’t share Tyson’s mission. Unfortunately, if they did, Wall Street would not be happy. And, of course, nothing is more important than making Wall Street happy.