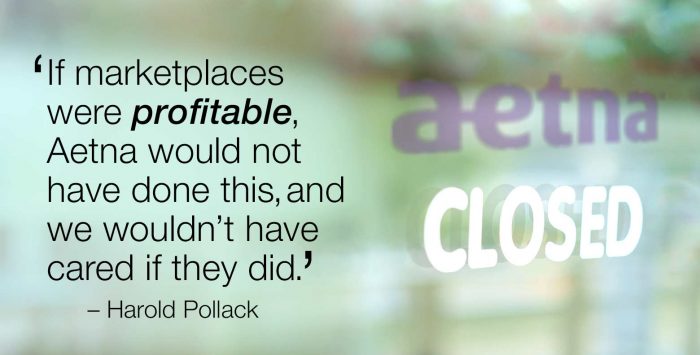 Six years on, the Affordable Care Act is embedded in American life. Twenty million people are now insured who would otherwise have gone uncovered. American health care is safer, better, and more humane as a result. Although in many ways ACA was a great triumph, it still faces many serious challenges to operate as well as it needs to.

When ACA was initially debated, many people on all sides believed that getting people access to market-based private coverage was the most valuable aspect, though it was a pity that ACA relied so heavily on Medicaid, which is so problematic.

In fact, ACA’s Medicaid expansion is working better than one might have expected in the states that have embraced it. It has enhanced millions of lives, financially supported health providers and the public sector. It has even made people healthier.

More than 11 million people now receive coverage through marketplace plans. Most of these individuals and families receive marketplace subsidies that make decent coverage affordable to them, often for the first time. It is the marketplaces that have faced the greatest difficulty.

The human experience on the marketplaces will never resemble the simplicity of buying a book on Amazon.com. Although premiums are lower than they likely would have been in the absence of health reform, affordability remains a big concern. Premiums and out-of-pocket costs are particular concerns for middle-class families with incomes between about 250 percent and 500 percent of the federal poverty line. For a family of three, this is between about $50,000 and $100,000 per year. These families earn too much money to receive large marketplace subsidies, and don’t earn enough money not to care.

The marketplaces are often a wild ride for regulators and insurers, too. No one quite understands the risk pool likely to emerge in these arrangements. One thing everyone does understand: The price competition is intense, with consumers primarily shopping (and switching) on the basis of monthly premiums. Some insurers are successfully competing in this new world. Others are struggling to adjust their business models in a very competitive market where they cannot charge more to people with costly health conditions.

Aetna’s announcement sent shockwaves through the health policy world. Its timing raised eyebrows in other ways, leading Senator Elizabeth Warren and other health reform supporters wondering if this was deliberate payback for the Justice Department’s recent decision to oppose Aetna’s proposed $37 billion acquisition of Humana. This April, Aetna’s CEO Mark Bertolini told investors that the marketplaces were “a good investment.”

The Huffington Post‘s Jonathan Cohn and Jeffrey Young excavated a July 5 letter to the Justice Department’s antitrust division, in which Bertolini wrote:

[If the Department of Justice blocks the proposed merger] it is very likely that we would need to leave the public exchange business entirely and plan for additional business efficiencies should our deal ultimately be blocked. By contrast, if the deal proceeds without the diverted time and energy associated with litigation, we would explore how to devote a portion of the additional synergies (which are larger than we had planned for when announcing the deal) to supporting even more public exchange coverage over the next few years.

Briefly put: Nice ObamaCare marketplaces you have there, Mr. President.

The timing and tone of Aetna’s announcement seem dubious. But it’s depressing to see liberals and conservative respond so predictably along the grooves of our own partisanship to a more complicated situation. If marketplaces were profitable, Aetna would not have done this, and we wouldn’t have cared if they did.

Marketplaces face real challenges that require real adjustment. Under the auspices of the Century Foundation, Timothy Jost and I have released one set of recommendations to address these challenges. Linda Blumberg and John Holahan of the Urban Institute released an excellent, complementary set of recommendations bolstered by concrete cost forecasts and statistical models.

Just yesterday, the respected health policy experts Sabrina Corlette and Jack Hoadley released a great discussion paper noting that these challenges are not unique to ACA. Some of the same concerns have plagued the Medicare Advantage program. Corlette and Hoadley offered several suggestions for the new marketplaces, many of which overlapped with what Jost and I, and the Urban Institute team, also proposed.

Four strategies for improving the marketplaces

The below four strategies could help financially stabilize ACA marketplaces and to improve the human experience of those receiving coverage in them. As Andrew Sprung noted here, many of these strategies are under active discussion within Hillary Clinton’s health care team.

Improving marketplace subsidies. Middle-class people need more help to keep marketplace subsidies affordable for them. This would improve the marketplace experience, while helping to attract and retain consumers and thus stabilize the marketplace risk pool. Consistent with Blumberg and Holahan’s analysis, Hillary Clinton proposes that no marketplace participants would be asked to pay more than 8.5 percent of family income in premiums. Given the declining growth in the cost of health care expenditures – a trend partially due to ACA itself – marketplace subsidies could be substantially enriched with the federal government still spending markedly less money on healthcare than was projected at ACA’s passage.

Better risk-adjustment and reinsurance to protect insurers. Insurers worry that they may face systematic risks if the overall marketplace pool is sicker than expected, or if the insurer attracts an overall sicker customer base than is served by its competitors. Such concerns were especially acute when the marketplaces began, because insurers had limited experience with which to properly set prices. ACA initially included “risk corridor” provisions designed to address such concerns. Late-2014 legislation largely defunded these tools, limiting the funds available to compensate insurers who experienced higher-than-expected losses. Senator Marco Rubio is often given credit for this maneuver, as suggested in such headlines as “Rubio Defunded Obamacare While Cruz And Trump Blustered”

Medicare Advantage has implemented increasingly sophisticated risk-adjustment approaches to address these concerns, some of which may be models for ACA. There is some evidence that the marketplace population is sicker and thus more costly than was originally projected. If so, these tools will be doubly important.

Provide better outreach and consumer assistance, including other tools such as auto-enrollment. Marketplace participants are often in volatile points in their lives. They get married or divorced. They lose jobs or get hired at new ones. They join Medicaid or Medicare. They get sick. Corlette and Hoadley note that 36% of marketplace participants are passively renewed into their previous plans, which are often needlessly costly for them. Consumers need more human help navigating these complexities. Jost and I propose a substantial increase in the number of enrollment assisters. They could use automated forms of help, too, such as algorithms which recommend the cheapest plans that include their previous health care providers in-network.

Enforcing the individual mandate. Before ACA, health insurers could charge based on an individual’s health status. Millions went uninsured because they were too sick or too poor and could not afford coverage. ACA achieves near-universal coverage by forbidding insurers to discriminate against the sick and injured, by subsidizing insurance for those who could not otherwise afford it, and by requiring everyone-with some exceptions-to actually be insured. That last one, the individual mandate, is important to deter healthy people from “going bare” by going uninsured until they worry they might need care. Corlette and Hoadley note that Medicare Part B and Part D actually include significant late enrollment penalties designed to ensure that people sign up when they are supposed to, rather than seeking to wait until they are sick. A strong individual mandate isn’t popular. It is essential to maintain a predictable and stable risk-pool.

But will we get there from here?

Proposals such as the ones above would improve and stabilize the marketplace experience for both consumers and insurers. Whether our polarized politics can deliver them is another matter. ACA seeks to implement a market-based approach that achieves near-universal coverage without radically upending our health financing system. ACA can’t be repealed at this point. It is too embedded in American life. But ACA remains intricate and messy. The marketplaces are less successful and stable than it needs to be.

Improving ACA requires pragmatic problem-solving and bipartisan negotiation. This sometimes happens in dealings between the Obama administration and Republican governors. Such collaboration is much rarer among politicians in Washington. The basic reason for this failure is simple: The most powerful congressional leaders have no stake in ACA’s practical success.

Of course, this may change. Candidate Donald Trump has not offered a detailed account of how he would repeal and replace the ACA. His most likely policy legacy may be to empower those most invested in the success of health reform.