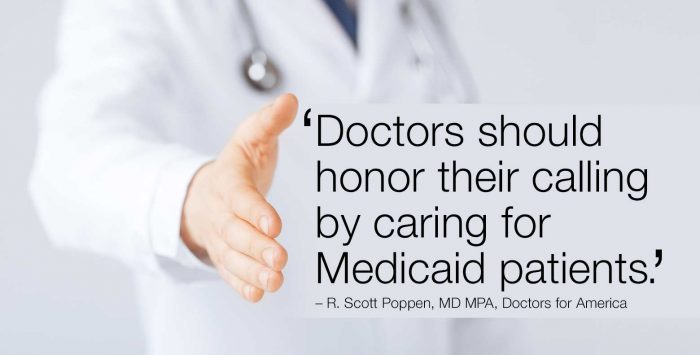 On the 51st anniversary of the establishment of Medicaid, Doctors for America, a national nonprofit dedicated to the promotion of a healthy America, is asking its 18,000 medical student and physician members to pledge to care for Medicaid patients.

This campaign will not be a stretch for us. We know from member surveys that 80 percent of our practicing members already care for Medicaid patients.

Why should our physicians sign this pledge? First, expanding Medicaid to the remaining 19 states who have not yet done so is a major focus of Doctors for America’s advocacy efforts. Paneling additional physicians to Medicaid strengthens the program by increasing access, decreasing wait times, and broadens referral networks. It demonstrates to state policy makers that Medicaid is a robust program that is able to absorb the new enrollees that will result from expansion.

Second, physicians committing to Medicaid sends a strong signal to governors, legislators, fellow physicians, and the general public that the program is a vital and indispensable safety net for the low income population. It is a program that needs continued support and enhancement by the states.

Third, the Medicaid eligible population deserves our care. Most are employed full-time, some with two to three jobs that do not offer insurance benefits. Many of these jobs are essential for the smooth functioning of our society. Many in the population are unpaid caregivers of children, the disabled, and the frail elderly. Others are in school or training and need temporary assistance until they can enter the workforce.

Finally, it is the right thing to do. Medicine is a profession, by oath and ancient tradition, of service. All physicians should, and most do, care for charity patients with no reimbursement. And all should also design their practices to fit in some patients with insurances that pay at lesser levels of reimbursement. That includes Medicare, and yes, Medicaid.

Steps we can take to improve Medicaid

But public policy makers should not take advantage of our profession’s native compassion. In far too many areas of the country, Medicaid reimbursement rates are so low that the payments do not even cover the physician’s administrative costs. Low rates discourage physicians and non-physician providers from participating. This lack of a network of specialists and ancillary providers discourages continued participation by physicians, especially those in primary care.

The Affordable Care Act made a positive first step by mandating and funding Medicaid reimbursement rates for primary care providers at parity with Medicare rates for two years. Some states wisely continued this policy when the program expired. Medicaid/Medicare parity in primary care payments should be a nationwide goal and there should be incremental expansion of these rates selectively to specialists and ancillary services of high value. Mental health and addiction treatment providers should be at the top of that list.

But physicians need to be sympathetic to the concerns of governors and state legislators. Medicaid has steadily become a larger share of state budgets and has shifted financial resources from the needs of public education, transportation, public safety, and, alarmingly, public health programs.

Medicaid must be reimagined to provide the highest value care for the millions of people who depend on it. It should be at the cutting edge in innovation in delivery and payment system reform – engaging all stakeholders including states, health care professionals, and patients in making it a stronger program for everyone. And what better place to do that than the 50 laboratories available across the country. Lessons learned in the states can then be applied to Medicare and the private insurance industry.

January of 2017 should be a critical and exciting time for Medicaid. The new Congress and Trump or Clinton administrations have a real opportunity to overhaul and redesign the program. Common ground for the two political parties exists and public pressure to end gridlock will be intense.

Republican principles of federalism and state control of federal funds would find some wings with loosening of HHS restrictions on Medicaid that stifle innovation and are perceived as barriers to expansion of Medicaid by the holdout GOP states. Democrats, with their commitment to universal access to health care, would latch on to any changes that enhance access. And both parties, and any administration, would rally around any modifications in Medicaid that make it more efficient and less costly.

But the federal government should insist that state Medicaid programs adhere to two principles established by the ACA; everyone eligible for the program must be covered and that coverage must include the ACA’s essential benefits.

It is up to each of us to do our part to keep Medicaid strong. Please share this pledge with physicians in your community, support efforts to expand Medicaid to all the states, and tell Congress to continue our national investment in Medicaid.

Scott Poppen has practiced primary care internal medicine in California and Utah for 25 years. He has been a member of the management team of private, public, and corporate medical groups. He joined Doctors for America in 2009 hoping to improve the American health care delivery system’s problems of access, cost, and quality which became apparent to him in his early days of training and practice.   He has served DFA as Utah State Director.