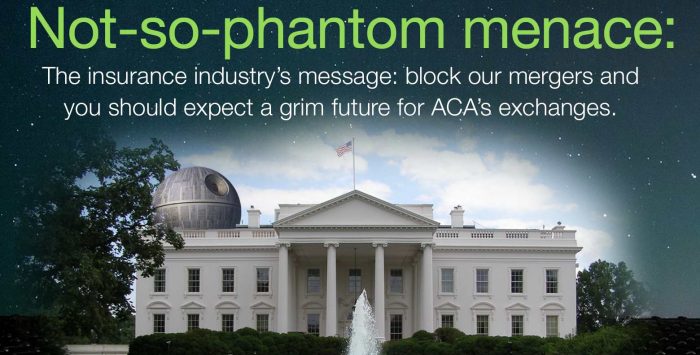 If federal officials fall for Anthem’s and Aetna’s latest PR ploy to win approval of their plans to buy the companies I used to work for, I’ll offer to sell President Obama a bridge or two.

During a call with Wall Street financial analysts last week – as Anthem announced Second Quarter 2016 profits – Anthem’s CEO, Joseph Swedish, indicated that the future success of the Obamacare exchanges hinges on whether his company’s $54 billion offer to buy Cigna can be completed.

“Our acquisition of Cigna will help stabilize pricing in this volatile (Obamacare) market, enabling Anthem to continue its commitment to the public exchanges, and provide the opportunity to expand our participation to nine additional states where neither Anthem nor Cigna currently participate,” Swedish said on that July 27 call with analysts.

You have to read between the lines here to understand what’s really going on. Swedish’s comments are both a slightly veiled threat to the Obama administration – which has a lot riding on the future success of the exchanges – and a “you-scratch-my back-I’ll-scratch-yours” kind of offer.

The implied threat is that if federal and state regulators and lawyers don’t approve the deals (in addition to Anthem’s proposed acquisition of Cigna, Aetna has offered $37 billion for Humana), the Obamacare exchange marketplace will somehow become less desirable for both health insurance shoppers and insurers, presumably because rates will continue to be “volatile” in some states.

What the insurers are implying here is that if the Obamacare marketplace doesn’t “stabilize” to their satisfaction (even though the companies will still be making money hand over fist) they’ll threaten to take their marbles and go home.

Responding to attempts to block acquisitions

Swedish’s remarks came less than a week after the U.S. Justice Department and the attorneys general of 11 states said they were suing to block the acquisitions because they didn’t think they’d be good for the country. In fact, they said, the deals, which would reduce the number of large national insurers from five to three, would do more harm than good.

“These mergers would restrict competition for health insurance products sold in markets across the country and would give tremendous power over the nation’s health insurance industry to just three large companies,” said Attorney General Loretta Lynch. “Our actions seek to preserve competition that keeps premiums down and drives insurers to collaborate with doctors and hospitals to provide better healthcare for all Americans.”

The insurers, of course, have tried to convince the public and regulators that the acquisitions would benefit consumers by making health insurance more affordable. There’s just one problem: there is little if any evidence to back up that claim. On the contrary, studies of past deals have shown just the opposite, that insurers, newly bulked up after the completion of acquisitions, have pocketed any savings that presumably resulted. The beneficiaries of those deals were the insurers’ shareholders and executives, not their consumers.

When the proposed Anthem-Cigna and Aetna-Humana deals were announced last year, I wrote about a study those companies undoubtedly hoped would go unnoticed. It found that big insurers not only didn’t lower premiums after an acquisition that boosted their market share, they actually raised them considerably more than their smaller competitors.

A handful of executives, on the other hand, make out like bandits when acquisitions are completed. As I wrote last summer:

Even in relatively small deals, executives can engineer jaw-dropping fortunes for themselves. While I was still at Cigna, Healthsource CEO Norman Payson pocketed $94 million when Cigna’s $1.45 billion acquisition of Healthsource was completed in 1997.

California’s insurance commissioner at the time, John Garamendi, now a congressman, blocked the acquisition for a while when it was disclosed that the WellPoint executives would walk away with $600 million from the deal.

He eventually gave the green light to the $20.9 billion transaction when the companies agreed to reduce the compensation package for WellPoint CEO Leonard Schaeffer and a handful of other executives to $265 million. Anthem CEO Larry Glasscock was rewarded with a $42.5 million bonus for closing the deal. When Schaeffer left the company a few months later, in January 2005, his retirement package was valued at $337 million.

To get Garamendi to drop his opposition, the companies said they wouldn’t raise their customers’ rates, at least not right away. But in 2010 Anthem made national headlines when it hiked premiums as much as 39 percent for thousands of its individual customers in California.

Fast forward a dozen years and Anthem – and its current CEO, Joseph Swedish – are still doing quite well, thank you. Last year the company reported total revenue of more than $78 billion and net profits of $2.6 billion, which was nearly identical to its 2014 profits. Over those two years (2014 and 2015), the company paid Swedish $27 million.

As for Swedish’s veiled threat and promise, in my humble opinion, President Obama has no reason to pay any attention to them. And also IMHO, he would have far reason to worry about the future stability of the Obamacare exchanges if the acquisitions are allowed to proceed.

That’s because big for-profit insurers simply are not reliable partners for the government (or any other customers for that matter). Just this spring, UnitedHealthcare, the nation’s largest (and most profitable) insurer, which currently sells Obamacare coverage in 34 states, announced that it planned to exit all but a “handful” of those states. Why? The company hadn’t yet figured out how to make as much money selling Obamacare coverage as it had hoped. Its losses in that relatively small book of business were making a dent in United’s overall profits, which totaled $6.8 billion – yes, $6.8 billion – last year on revenues of $157 billion.

UnitedHealthcare’s announcement reminded me of an announcement my staff and I had to handle 16 years ago when I was at Cigna. In the late ’90s, Cigna’s executives decided to get into the Medicare HMO business in a big way. But like United’s executives, they came to realize they didn’t know how to make as much money on that book of business as they had thought they’d make. So in June of 2000, Cigna announced that it would exit 13 of the 15 Medicare HMO markets it was serving at the time. As the Philadelphia Inquirer reported, that meant that more than 100,000 senior citizens had to scramble to find an alternative.

Despite what Anthem and Aetna executives would have us believe, Obamacare would face far more potential instability if their acquisitions of Cigna and Humana go forward. UnitedHealthcare’s exit actually won’t affect many consumers because the company never attracted many in the first place. But Anthem in particular has signed up a significant percentage of Obmacare enrollees nationwide – almost a million as of the first of this year.

So if the acquisitions were to be approved, Anthem and Aetna would have the administration by the short hairs. Even if one of them were to threaten to get out of the Obamacare business in the coming years, the government would have little choice but to cave in to whatever demands the company might make to keep the exchanges “stable.”

If both of them were to threaten to exit at the same time – not an unrealistic possibility – the situation would be even more dire. The small cabal of huge for-profit insurers, accountable first and foremost to shareholders, would be even more in charge of our health care system than they already are.