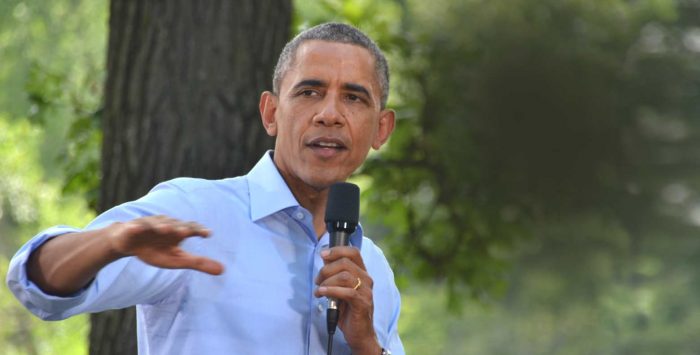 When health insurers start to announce rate increases for the upcoming year, it almost always comes with a sense that the sky is falling. There’s been no shortage of doomsday reporting lately as companies submit rate increase requests for 2017 Obamacare insurance policies.

Across the board, things don’t look so bad: The Kaiser Family Foundation projects a rate increase for the second-lowest cost Silver plan in 14 markets of about 10 percent.

But changes in what insurers charge for coverage vary widely across states and among insurers, and in some cases, the jump in prices is concerning. Though insurer rates in Washington and Rhode Island are going down, health consulting firm, Avalere, found the lowest-cost Silver plans in Connecticut, DC, and Oregon will increase by more than 15 percent.

Those numbers are tame, however, when compared with the requested rate hikes submitted by Geisinger Health Plan in Pennsylvania, which filed for a 40 percent increase in 2017, and Blue Cross and Blue Shield of Texas which is looking for 60 percent jump.

Three years before the ACA took effect, health insurance premiums were increasing by 10 percent to 12 percent each year, and the rate of the uninsured was growing.

Today, even as news about big premium increases for 2017 raises concerns about the Affordable Care Act’s long-term health, an analysis released last week in the journal Health Affairs seeks to put things in perspective. The upshot: Things could be worse.

It turns out that the average premiums in the individual market actually dropped when the ACA was implemented.

“Average premiums for the second-lowest cost silver-level (SLS) marketplace plan in 2014, which serves as a benchmark for ACA subsidies, were between 10 and 21 percent lower than average individual market premiums in 2013, before the ACA…,” write researchers from the Brookings Institute. 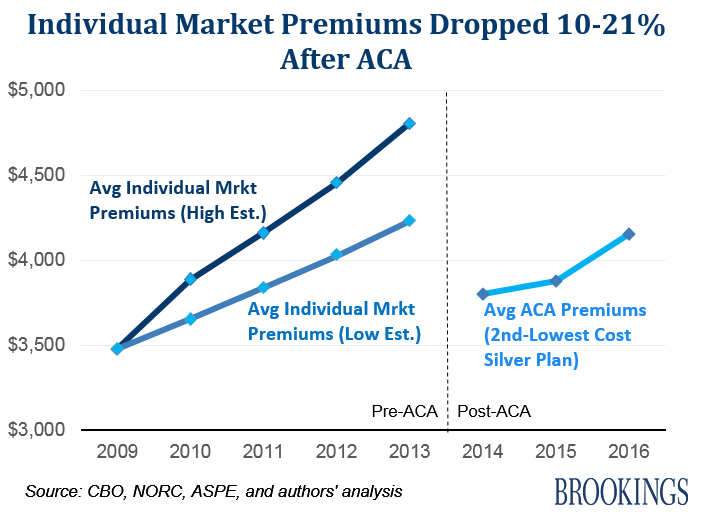 And in 2016 – two years into the marketplaces’ operation – premiums are still lower than they were in the individual insurance market in 2013. They’re 20 percent below the Congressional Budget Office’s (CBO) original projections, write co-authors of the analysis, Paul Ginsburg and Loren Adler.

In addition to lower than expected premiums, ACA plans include a host of benefits many policies didn’t have before the law took effect. That, along with a guarantee of coverage for all who apply for health insurance and restrictions on medical underwriting should have caused a precipitous spike in the cost of health plans.

These results are not what many experts expected.

Researchers give credit for the downward pressure on prices to a host of factors: Competition created by an insurance market that expanded to include millions more customers, greater authority built into the law for lawmakers to review insurer’s premium rate increases, and a cap on the percentage of revenue insurers can use for overhead and administration.

More importantly, insurers were insulated from financial loss by the law’s risk corridor and reinsurance programs, the latter of which the Commonwealth Fund claims reduced premiums by as much as 14 percent over the three years it’s been in place (it expires after this year).

New benefits baked into ACA-compliant plans give consumers more for their money; Silver plans cover 17 percent more health expenses than the average plan prior to the ACA, according to the analysis.

Even with rates set to skyrocket in some markets for 2017, researchers estimate that things would be much worse without the ACA. In fact, rates would have to rise by “more than 44 percent in 2017 to approach where individual market premiums would have likely been in the absence of the ACA, even under conservative assumptions,” the researchers write.

And, they’re reasonably optimistic that future years will see a return to more modest increases.

Health care consultant, Robert Laszewski, who is no fan of the ACA, wrote about Covered California’s recent announcement that in contrast to a rate increase of just 4 percent last year, rates will rise on average by 13 percent next year.

“The cheapest cost plans are cheaper for a reason,” Laszewski writes.

Despite differing opinions among experts, there’s little debate that average Americans are, in many cases, struggling to keep up with rising health care costs. Our spending on deductibles and other out-of-pocket expenses is outpacing wages and these expenses are offsetting the savings gained in lowered or limited premiums growth. 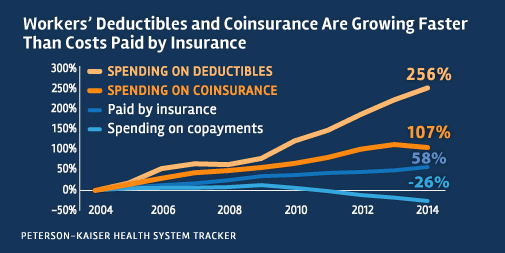 Even President Obama openly acknowledged that despite inroads the Affordable Care Act has clearly made in improving access to health insurance and by extension, to care, for millions of people, rising health care costs remains a huge problem in this country.

He succinctly summed up the pain many people feel in a recent essay published in the Journal of the American Medical Association – the first time, by the way, a sitting president has done this:

“…Too many Americans still strain to pay for their physician visits and prescriptions, cover their deductibles, or pay their monthly insurance bills…”

If history is any prediction of the future, we’ll struggle next year as we do nearly every year, with the growing cost of medical care and health insurance. Will competition in the marketplaces, efforts at payment reform built into the ACA and plans to bolster the law in ways it currently falls short be enough to lower costs going forward? Only time will tell.