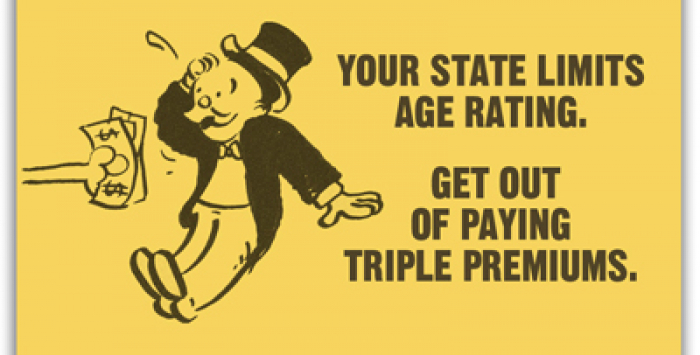 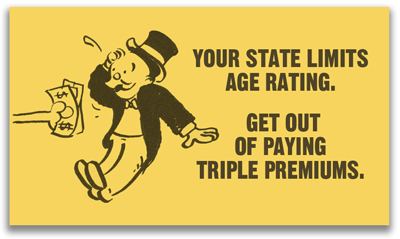 The Affordable Care Act leaves it to the states to decide whether they will allow insurers to charge older Americans more for coverage. If a state takes no action, a 64-year-old buying his own health insurance in the individual market will pay up to three times more than an 18-year-old.

The Affordable Care Act leaves it to the states to decide whether they want to let insurers charge older Americans more for coverage. If a state takes no action, a 64-year-old buying his own insurance in the individual market will pay up to three times more than an 18-year-old. In the small-group market – if a small business employs an unusually large number of older workers – the same 3:1 ratio applies.

Today, in most states, there are no caps on how much insurers can charge a 60-something forced to purchase his own insurance. In the individual market, only New York State bans age rating altogether, and just three other states limit how much premiums can vary, based on age, to less than 3:1. When insurers sell policies to small businesses, Vermont also prohibits age rating, but only five other states cap increases.

To check whether your state shields older boomers in either of these markets, take a look at these charts. (A checkmark in the right-hand column means that age rating is now unregulated in that state.)

Help from the younger generation?

Under reform, more states could decide to ban age rating, or follow Massachusetts’ example, and limit the ratio to 2:1. But, politically, this would be a third-rail decision.

If older boomers pay less, younger adults would be charged more, and most are vehemently opposed to being asked to support the Pepsi Generation. As one of my younger readers once commented, “I’m willing to help my mother, but not someone else’s mother.”

In other words, when costs are distributed over a large group, older adults save more than younger adults lose.

Still, many believe that older Boomers can and should pick up the higher tab for their own care. After all, throughout their financial lives, they have been luckier than most: they enjoyed first crack at the employment market when jobs were plentiful, and first dibs on housing when homes were affordable.

By that measure, the recession has hit them harder than other age groups except Americans aged 15 to 24. Over those years, this cohort should have been enjoying their peak earning years. But they didn’t.

Even worse, the Wall Street Journal reports, “at an age when they should be generating peak … savings,” many have been raiding their retirement funds and “applying for early Social Security benefits.” Among median-income households headed by someone age 55 to 64, total savings and assets stand at just $87,200. In 2014, they will be the 50- to 64-year-olds struggling to scrape together $7,500 to $8,500 to purchase health insurance in the individual market.

Of course, younger middle-class Americans also have watched their incomes slide, but time is on their side. They have many more years to recover. The problem for a jobless 60-year-old is that she won’t be able to make up for her losses unless she finds a higher-paying job – and that isn’t likely.

In 2014, just how many older Americans will find that they can’t afford universal coverage? Writing in Health Affairs in February, the Urban Institute’s researchers estimated that under reform, age rating means that roughly 1 million Americans age 45 to 64 will forego insurance.

This worries policymakers for two reasons. First, we need young, healthy Americans in the pool to keep insurance costs down. Secondly, if young families decide to forego insurance, many won’t buy separate policies for the children.

How do we choose between children and their grandparents?

If we don’t want to ration care, the only rational solution is to bring down the cost by trimming waste in our health care system. This will be difficult. Most of the fat isn’t hanging out on the edges of the steak – it’s marbled throughout in the form of unnecessary treatments and over-priced products. It needs to be removed carefully, with a scalpel. But it can be done.