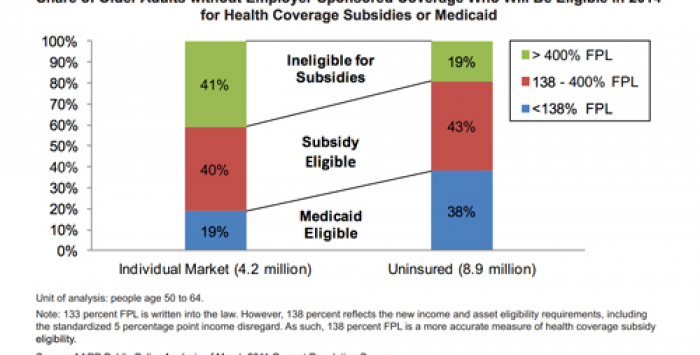 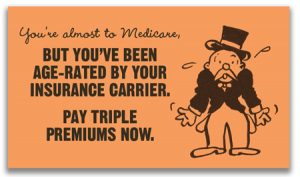 Under reform legislation, insurers selling policies in the individual or small-group markets can charge older Boomers up to three times more than a younger adult would pay for an identical policy – unless the older person lives in a state that limits age-rating.

But not long ago, her job was eliminated. Now, she doesn’t know how she is going to afford insurance when the COBRA policy that extends her former employer’s group insurance expires next year.

“In 2014, health reform will help me – if I can afford the premiums,” says Peterson, whose name has been changed to protect her privacy. “But that’s a big ‘if.’ I’ll be 62, and even with reform, insurance companies will be able to charge me a lot more than they would charge a younger person,” she explains.

“We’re lucky that by husband has Medicare. But I’m told that premiums just to cover me could run as high as $7,500 year.”

Peterson is right. The Affordable Care Act protects many groups, including women, and patients suffering from pre-existing conditions. But one group will be asked to fork over substantially higher premiums than anyone else: older Americans.

Under reform legislation, insurers selling policies in the individual or small-group markets can charge older boomers up to three times more than a younger adult would pay for an identical policy – unless the older person lives in a state that limits age rating.

Some 50-somethings and 60-somethings will be shielded: individuals who earn less than 400 percent of the federal poverty level (currently $44,680 for individuals, $60,520 for couples) will be eligible for tax credits. This will help roughly 40 percent of older Americans pay higher premiums.

Subsidies will miss many Boomers

But Peterson still works part-time, and her husband brings in a little income. Together they are earning $63,000. They’re not rich; they sit squarely in the middle class. But they’re too affluent to qualify for a subsidy.

The Petersons are hardly unique. As the graph below shows, under reform, 41 percent of Americans between the ages of 50 and 64 won’t qualify for help, including 19 percent of the 8.9 million older Americans who are currently uninsured. 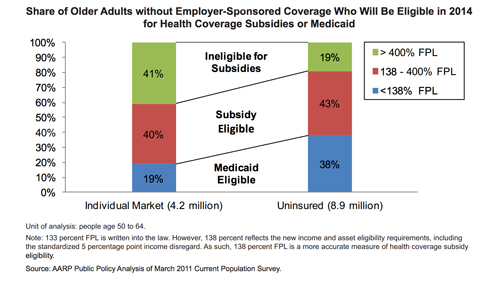 Two out of five Americans between the ages of 50 and 64 won’t qualify for help from ACA subsidies. Graph: AARP Public Policy Institute

Meanwhile in recent years, the number of unemployed older boomers has soared. If you count those who want full-time work but are working part-time – as well as discouraged workers who have quit looking – at the end of last year, over 17 percent of Americans ages 55 to 64 couldn’t find a job. That’s 4.3 million – up from 2.4 million in October 2006.

It’s not surprising that some have given up. Among unemployed workers over 55, over half have been searching for more than two years, according to Carl Van Horn, head of the John J. Heldrich Center for Workforce Development at Rutgers University. Even when older workers land a job, nearly three-quarters of them take a pay cut, often a big one.

Still, there are legitimate reasons to ask those who are 50-64 years old to shell out more for insurance. Even if an individual does his best to take care of himself, as he ages, a combination of environmental factors, genetic predispositions, socio-economic factors and the sheer stress of daily living make him increasingly vulnerable to chronic illnesses such as heart disease and cancer. Thus, while insurers pay out only about $280 a month for American aged 25 to 34, adults in their early 60s file insurance claims that average $860.

They need insurance, but even under reform, many who don’t work for a large employer will find age-rated premiums unaffordable. Rather than purchasing insurance, they’ll pay a penalty, cross their fingers, and hope they stay relatively healthy until they qualify for Medicare at 65.

Make no mistake: Peterson realizes that, in many ways, reform will help her. “I’ve read that today, in some states, a 60-year-old can wind up paying seven times more than a 25-year-old for exactly the same policy. Starting in 2014, they won’t be able to charge me more than three times as much. Insurance companies also will have to cover all essential benefits; they won’t be able to hike my premiums because of what they call ‘preexisting conditions; and I’ll be able to get preventive care without co-pays or any other cost sharing.

“For people like me, this is great news. But I worry about those premiums. Add in my co-pays and deductible, plus my husband’s out-of-pocket costs under Medicare, and more than 15 percent of our after-tax income will be going out the door to pay for healthcare. It’s like having another mortgage.”