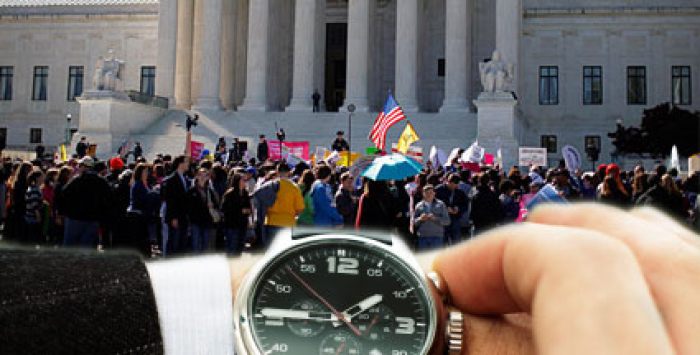 While America waits for the U.S. Supreme Court to make its decision about health reform, is the health care system standing still?

Health spending has had its slowest growth in half a century in the past few years since the Affordable Care Act passed. We are seeing new ways to pay doctors and hospitals that have the potential to deliver higher quality care. Health care research continues with some significant breakthroughs. Children are being accepted by health plans even with pre-existing conditions.

So why do so many of us feel on edge? What are the possibilities for a Court decision and what will the impact be in each case?

Bookmakers and law experts are split but give Options 2 and 3 the highest probability. What would each of these actions mean for you? I am not a lawyer, so this is a policy … not legal … perspective:

If the entire Act is declared unconstitutional, you could lose several things that have already been implemented:

You could also lose the opportunity, once health reform is fully implemented in 2014, to choose a health plan through a state exchange (although some states like California, New York and the State of Washington would likely go ahead with the exchanges anyway) and with that loss, a revival of the high cost of individual insurance plans and the chance of being rejected for coverage. Your brother–in-law who has no insurance and is working for a company that doesn’t offer it, would likely remain without coverage.

The law without the mandate

What if only the individual mandate is overturned? There is a lot more to the Affordable Care Act than just the individual mandate. But most economists and business analysts predict that health care costs would increase, because the uninsured would continue to use the system as a last resort, shifting the costs to those of us who are covered. Unless Congress required health plans to accept all applicants, you would once more be in jeopardy of being rejected for coverage if you have ever visited a doctor.

There are, however, a number of ways to get around the overturning of the individual mandate. (See this article in Business Week for a complete description of eleven alternatives.) States could implement their own mandates, like Massachusetts did; there could be penalties for late enrollment; there could be larger subsidies to entice people to enroll; states could require people to enroll by automatically enrolling them and forcing them to opt out if they don’t want insurance.

While we wait for a Supreme Court decision, we should enjoy the provisions we have and work to elect representatives who support our point of view. The Republicans are aware of the popularity of many of these programs and a small group of their legislators has been working on ways to maintain the more popular provisions if the law is overturned. But there is significant pushback from the Tea Party element in the House of Representatives that wants only complete repeal.

Whatever way the Court decision goes, the ultimate future of health reform will be dependent on who wins the Presidency and the Senate in November.

Dr. Linda Bergthold has been a health care consultant and researcher for over 25 years. She worked on the Clinton Health Reform plan and was the head of the Obama health care blog team in 2008. She also writes for The Huffington Post on health reform and insurance issues. Her previous articles for healthinsurance.org include Lifetime limits on your health insurance coverage are a big (million-dollar) deal and 2011: a very good year for health reform.